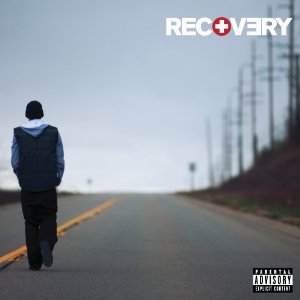 Let’s get this out of the way: last year, I overscored “Relapse” and looking back, although I still feel the crux of my words were vaguely on point, I know that it wasn’t worth an 8.0 – more like 5.0 or so. Handily, it seems, Eminem himself agrees with me, practically disowning “Relapse” and rattling off some harsh words about “Encore” (I can definitely agree with that). That’s not to say that his last outing was an album without merit, just that it was nowhere near the lofty standard that Em has set for himself.

“Lofty standard” huh? Well, let’s continue with this newfound honesty: out of seven albums, how many bonafide CLASSICS are there? You know, actual classics that have great beats, rhymes, concepts and practically no filler? “The Marshall Mathers LP” is the closest we get. Mathers himself claims “Infinite” is like a demo that he never wished had seen the light of day; “The Slim Shady LP” was patchy but piercing; “The Eminem Show” was entertaining, and the next best after TMMLP; “Encore” he looked exhausted, sounded drugged out, plus it had “Just Lose It” as the lead single, FFS; and “Relapse” which was his misguided attempt to get back in the game.

The truth of the matter is – and this is where a lot of people seem to have missed the point – expecting Eminem to drop a genuinely classic album is a lot like expecting England to win the World Cup. Yeah, it happened ONCE a long time ago, but trust me, it’s not likely to happen again any time soon. Therefore, the most one can hope for from Eminem is to be entertained (through wit, verbal dexterity or emotional resonance), for him to drop some memorable singles, and for him to not be completely embarrassed. Is this being negative or plain realistic? The latter, since that is the form that he has displayed for a dozen years now – his magnum opus TMMLP aside, you can guarantee two things in the life: that Eminem just doesn’t really do traditionally “classic” albums and he’s never made a half-decent club record before, never will.

Now that I have sufficiently dampened your expectations, what of “Recovery,” his latest album and a real throw of the dice to get him a slice of this 2010 mindshare? There is good news, and bad news – and it is down to you, reading this little review, which is which. “Recovery” is one of the strangest albums I’ve encountered, and it is truly dependent on the listener. One individual might completely love it, another hate it – for pretty much the same reasons. Example: there is only one Dr. Dre record out of 17 numbers. Personally, I’ve barely heard anything great from Dre in the last 3/4 years (non-headphone related, this is), but others bemoan his slight input. Some are disgusted that he shares songs with Pink and Rihanna. Again, for me, Pink is, as a rule, annoying but she is barely distinguishable, and I think the Rihanna collaboration “Love the Way You Lie” is very well conceived/executed (it will help this album to sell millions). Someone else may have just stopped reading this review as a result.

You either root for Eminem or rout him. Gone are the weird accents, and in comes a voice that occasionally sounds like Marshall Mathers, but mostly like an old deaf drill sergeant. Seriously, he shouts on “Recovery” – a lot. He even says at one point, “Why am I yelling at air?” and it’s a fair enough question. Yet, though I find it annoying, another hails it as passionate/inspiring. There are no skits, and no real binding concept – the first time that has happened in his major label career. I think it is a good idea – forget distracting concepts or narrative arcs, just prove you can create good songs (plus skits are usually overdone). Other listeners miss the skits and movie-like “scripts.”

Aside from the confusing duality of the album, there are various other issues. The production, for one, could appear to be bland, yet as an album it is very listenable – certainly not superb, but it does a good job (a much better one, too, than “Relapse”). I’d argue that out of 17 full-length tracks, only 3 don’t earn their place (“W.T.P.” and “Cinderella Man” – plus one of “So Bad” or the album closer). Just Blaze sails very close to the wind on “No Love” – which is already one of the love/hate tracks. Is it a poor choice of sample, an inferior re-run of “Drop the World” or a raging success? Youâ€™ll have to decide for yourself, Iâ€™m afraid. DJ Khalil provides his usual level of consistency, with “Talkin’ 2 Myself” in particular growing into a memorable effort. Even Jim Jonsin pops up on the solid Hotel California-ish â€œSpace Bound.â€

As far as the lyrics go, well that really is a complex issue. For my money, it feels like his flow is starting to come back again on tracks like “On Fire” but he does start overdoing the whole spitting fast thing, not leaving it alone like a new toy. The more obvious punchlines actually aren’t very impressive, but the more hidden away ones work a touch more. What’s shocking isn’t the shock tactics, but his complete brutal honestly displayed on “Changes” and “Not Afraid” – even “Talkin’ 2 Myself.” And whilst every track isn’t at the pinnacle of interesting topic matter – Eminem still loves to rap for the sake of it, frequently – it reminds me of that Jay Electronica quote where he describes how the music he loved (in this case, OB4CL) perhaps had a limited scope, but it was delivered artfully. “25 to Life” is a superb song with a clever concept, sure, but that doesn’t mean “On Fire” isn’t, just because he’s rapping for the sake of rapping. Eminem gains pleasure from playing with words, and it’s not as if he’s never found an audience to share that love with.

I remember watching an interview with Donny Osmond a few years back. He was part of that hugely successful group, and over the years, pressure had built up on him until he lost all flavour for performing solo. He became depressed and disillusioned, until someone told him to just go out there, perform, and not put the burden of trying to be “perfect” on stage – just go and be “average.” It took the pressure off his mind, and he went on stage to give a memorable performance. I’ve listened to this album a lot, much more than I planned to – that is because, pure and simply, it is enjoyable. Not perfect, not bulletproof, just enjoyable. Eminem is, arguably, still finding himself, perhaps even his voice. But this feels like HIM. For the first time, I listen to him on “Recovery” and don’t feel like he’s trying to hustle me; he seems to ask nothing of me, other than that I listen without prejudice, and give him another chance. He still sounds a touch lost, overcompensating with his flow and some weaker punchlines, but he looks to be steadying the ship. This will hold a bizarre position in his catalogue – “Recovery” is not his best, nor his worst, but either people will listen incessantly or barely at all. There is no middle ground.