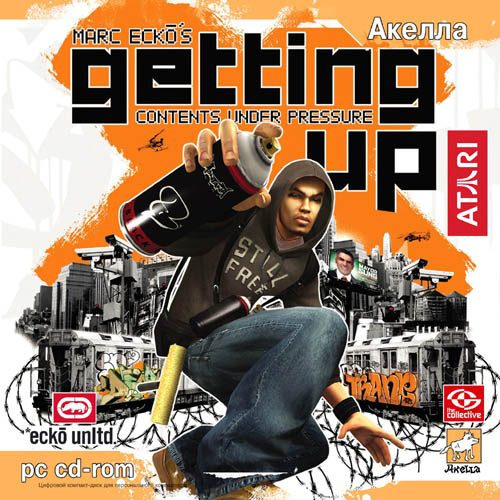 Various Artists :: Getting Up (Contents Under Pressure) Soundtrack

It was only a matter of time before another element of hip-hop got snatched up by the video game industry. Both types of entertainment share a huge audience, and “Parappa the Rapper” was a damn fine attempt at turning rapping interactive with a video game console. Graf writing is a logical next step seeing as you can actually interact with an environment when you practice it in real life, so the possibilities for a video game are endless.

I never thought I’d be saying this, but I’m not much a video gamer anymore. Still, anything that gives me new material from Rakim and Pharoahe Monch is cool with me. This album is littered with little ten-second interludes introducing us to the video game characters. This is utterly useless, I would imagine, even to fans of the video game. Nine of the twenty three tracks add up to about a minute of this nonsense. On top of that, there are a handful of instrumental cuts, so there are very few actual rap songs. The ones that are here, though, are certainly worth checking for.

“Getting Up Anthem” leads off with a collaboration between Talib Kweli and Rakim. The beat is nice, nothing special though. Both emcees give vivid glimpses of New York street life which vaguely pertain to the video game. Somehow, neither really kills it, but it’s absolutely wonderful to hear Rakim’s voice on some new material. Either way, this one is somewhat of a disappointment.

The musical interludes are mediocre and add nothing to the motion of the album. They simply fill in the blanks left by a lack of actual rap songs, and they do this pretty well. The best song on the soundtrack is “Wanted” by Rhymefest. The beat is smooth and subtly bouncy, and Rhymefest drops some profound words revealing his own paranoia. A lot of intelligence, some serious movement, and a memorable chorus all add up to near perfection.

Serj Tankian remixes “Who Shot Ya” terribly, switching the original’s calm, chilling vibe in favor of a frantic hard-rock sound. BIG’s original vocals are even tweaked to match the new speed. This song is pointless and unfortunate, especially since it is one of the five rap songs on the album. Skip this one and seek out Pharoahe Monch’s “Book of Judges.” Here, the edgier rock noise is implemented more lightly and Pharoahe brings his singing skills in addition to his limitless potential as a rapper. Still, something’s missing. Pharoahe Monch is so good that every verse he drops should be riveting, but he isn’t trying as hard as he could. The beat, also, is so chaotic that Pharoahe’s cadence loses its crispness.

The soundtrack closes out with “Dolce’s Theme,” a nice little song in Spanish that adds flavor and originality to the record. By this time, I’m left wondering who this soundtrack was designed for. There are many more character interludes from the video game than actual rap songs, which is a shame because the people in charge have a firm grasp of who I want to hear, they just don’t give me enough of it. Additionally, when work from Pharoahe and Rakim does arrive, it is duller than I expect from such personnel. Some of the remaining musical interludes sound like video game music, making me suspicious that they are just instrumentals used in the game that were added to augment the thin content. Ultimately, the record gives me exactly what I expected: A few notable tracks and a lot of filler that might appeal to the game’s fans, but certainly not the average rap music fan. It’s too bad, because they couldn’t enlist more A-level help from hip-hop’s elite, and those that do drop in aim rather low.