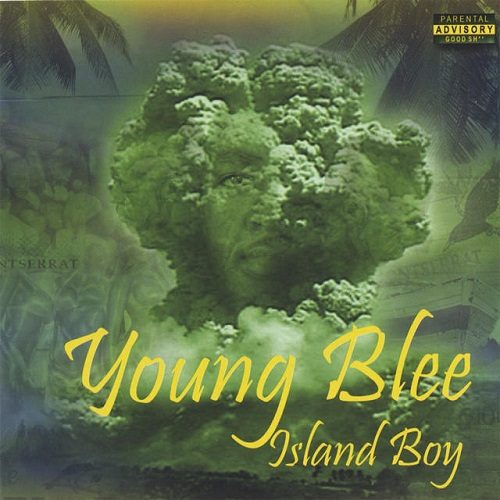 The island of Montserrat is a tropical paradise with a terrible danger lurking in the background. The huge SoufriÃ¨re Hills Volcano sounds like a laid back giant, but when it suddenly erupted about ten years ago it caused mayhem and casualties on the Carribean island. It also caused MC/producer Young Blee to seek shelter outside the island, and he left his family for a brighter future in Great Britain.

With that little Carribean history check out of the way, the mystery why his debut album is called “Island Boy” has just been unraveled. Without a doubt, the forced departure to London must have been very traumatic for a teenager leaving behind everything he is familiar with. That is why it comes as a bit of a surprise that he used an erupting green volcano as the front cover for his album. His friendly face has been photoshopped into the ashes, which kind of resembles the sun/baby creature from that famous kiddy show The Teletubbies. First impressions do count and that conflicting cover doesn’t do the trick at all.

All the problems with relocating and making it in his new home country didn’t turn Young B-L Double EE into a sour puss. His lyrics ooze with positive thoughts on life, love and happiness. The press bio tells us that he has “a strong sense of family values, culture and discipline, which is very prominent in his character.” As he states on “So Emotional”: “Look man, it ain’t my problem you want to hate. This my life. I love it. It’s phat!” Talk about the Teletubbies spirit.

Blee should be upset about his own lyrical skils. He started out as a producer, but made the transfer to being an MC because he wasn’t happy with the lyrics other MC’s were spitting over his beats. Well, “not happy” is a bit overstated in his book. We should stick to the more positive “not entirely content with.” Just to give an idea what the average punchline coming out of his mouth sounds like:

“I knock you out quicker than 80% liquor
Catch me in a bad day, it’s done even sicker
I’m Slicker than Rick {*unidentified gurgling sound*}
So you want to try, deny this young fly chick”

His jabs are just too friendly for other MC’s to even break a sweat. His delivery, however, has sweatiness written all over it. Blee seems to be running out of breath constantly, like a marathon runner with an asthma problem. Perhaps he strains his voice like this to sound more streetwise, but all it does is disrupt his ability to flow in a natural way. Young Blee probably isn’t a huge fan of the Dirty Harry flicks, but his voice certainly sounds like a bad imitation of the legendary cop-with-an-attitude.

If Dirty Harry was a real cop instead of a fictional Hollywood character, he should be making the collar on Young Blee for his achievements on the production boards. The occasional steel drum samples make it sound like we’re dealing with someone who is originally from a Carribean island, but the remainder of the album consists of badly programmed drum computer sequences, keyboard melodies that would have been out of fashion even in the eighties, and crunk bass beats that sound uninspired and boring.

The most surprising thing about “Island Boy” is probably the strong presence of R&B artists that carry the album’s musical outline. On no more than ten out of sixteen tracks Young Blee is backed up by the unimpressive Dexter Williams and a lady with the illustrious name of Coco Bunni. The Carribean refugee doesn’t mind doing a little singing of himself on the romantic “Down Wit U” or on a tribute to all the lovely ladies out there “How You Doin’.” It is questionable whether his singing is any better than his rhyming.

Because Young Blee appears to be such a nice guy, it may sound harsh to judge him in such a negative way. But to me, the British immigrant just doesn’t have what it takes to achieve a successful musical carreer. Luckily, Blee will not take my disapproving words in the wrong way and will continue to keep doing what he does with that big ol’ grin on his face that shines through any vulcanic eruption.