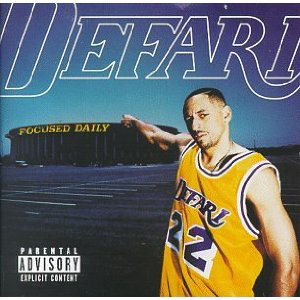 I decided to revisit Defari’s 1999 debut LP after I came across a couple of references to it on the site but without an actual review in the archives. I remember frequently bumping this album back when it dropped as well as a few times since and wondered whether it would stand up to scrutiny thirteen years later or if nostalgia was getting the better of me.

Back when this was released the Likwit Crew had one of the strongest cliques in the game. With Tha Alkaholiks, Xzibit, Lootpack, King T and Defari along with the closely affiliated Dilated Peoples and Strong Arm Steady, the Likwit Crew had a whole bunch of talented MCs and dope producers. Any crew that can call on in-house production from Madlib, Evidence and E-Swift as well as rhymes from Tash, J-Ro, Xzibit and Iriscience had some serious strength in depth. The fact that many of these artists have gone on to enjoy solo success away from the Likwit umbrella speaks volumes about just how talented this particular crew were. Defari’s career sadly never reached the heights of an Xzibit or an Evidence but his story is well known. Complete with a bachelor’s degree from California and a master’s degree from New York, Defari spent many years as a teacher of both history and geography at Inglewood High School in California before his hip-hop career took over and he swapped the classroom for the studio. He has released a handful of LP’s, both solo and with DJ Babu, but in my opinion none have really followed on from just how dope his debut effort was.

The album kicks off with a short but banging intro that sets the mood for the record. Tinkling keys are quickly accompanied by some pounding bass before DJ Revolution steps in and goes ape-shit on the turntables, cutting the track to ribbons. The title track “Focused Daily” follows, underpinned by The Alchemist’s subtle piano-laced beat and dusty drums. This beat is almost perfect for Defari’s crisp and clear delivery:

“Sleep on the champ, man, you better read the scouting report
You doubtin’ this so I connect wit’ Mr. Alchemist
The Soul Assassin straight blastin’, bringin’ heat
You marvel at my connects wondering why you can’t compete
You’re not competitive, you’re more like a sedative
You put me to sleep wit’ each line, are you the bedtime kid?
Yet in still, I remain crisp like newly printed bills
And watch for those money-hungry Anita Hills
Lyrics are effortless, no matter how stormy the weather gets
Those who know me like Kobe say “he’s proliferate”
The gifted kid, focused like triangular push-ups
Why you claim to be hard when you a buttercup?
I fuck shit up, stutter-step wit’ action packed mag
Don’t pull no crap, just hit the track like a fullback
Lead block, don’t mistake this for no pop-rap-pop
But that raw deal feel, that real hip-hop”

Dilated person Evidence comes through on this track with an equally strong verse both keeping the momentum going as well as reinforcing the Likwit Crew’s attendance on this album. It’s hard to explain but even on tracks when Defari chooses to fly solo, the crew’s vibe is ever-present and really helps to tie this album together. Defari himself has an assured presence on the microphone. Without wanting to compare him to the late, great Guru, the clarity and crispness in every word is definitely reminiscent of the legendary Gifted Unlimited himself. His flow itself is not too complicated; there are no overly clever punchlines or complex metaphors that will leave you scratching your head, just solid line after line that perfectly fits the stellar array of beats on show here.

“Never Lose Touch” and “Keep it on the Rise”, both produced by Evidence, follow before Alkaholik E-Swift’s “Lowlands Anthem, Pt 1” graces the speakers. The latter is Defari’s ode to his stomping ground of Los Angeles and the hazy production fits perfectly. “Bionic” is up next which is one of my favourite joints on this LP. Evidence’s piano-heavy, sombre production and the chopped Raekwon vocal sample complement each other brilliantly while Defari takes aim at wack MCs.

The Likwit Crew’s posse cut is up next, “Likwit Connection” features Tha Alkaholiks and Phil Da Agony joining Defari on this infectious E-Swift cut and while all MCs shine, it is Tash who spits some of the most memorable lines:

“I’m hella cocky on the mic, I fuck it up on Jeep beats
So while you rockin’ to this beat, the beat is rockin’ to me
Foul mouth Catashtrophe, I knocked heads since ’93
So when you come across my style it’s like you smacked into a tree
I turn the heat up in this bitch, I make the women strip fast
So no matter what you do, you can’t fuck with big Tash
I came to kick your ass, quick fast, not to house you
I want your homies sayin’ “Tash smacked the shit out you”
Smoke something, drink something, eat lyrics that twist
This that shit that’s on your baby momma’s Christmas list
So it boils down to this, no matter what your nigga’s name is
You’re not as famous as the Likwit entertainers”

“Thunder & Lightning” featuring Xzibit is another banger courtesy of that man Evidence. The crashing drums are perfectly tailored for Mr X to the Z’s trademark gruff delivery and the chemistry between himself and Defari creates another highlight on this LP. The album draws to a close with the simplistic yet beautiful “People’s Choice”. Ev is behind the boards once more and his summery soundscape is ideal for “the city brother who lives by the beach.” The production on “Focused Daily” rarely drops below ‘excellent’ but with beatmaker credits split between Evidence, E-Swift and The Alchemist, I guess it is to be expected.