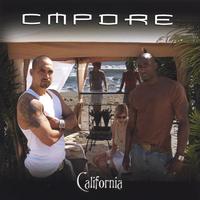 At first glance, Cmpdre may seem to be more of a gimmick than anything else. After all, a group consisting of a Mexican rapper and a Black rapper and named after the Spanish word for “friend” (well technically it means “godfather”) just reeks of being contrived. Some of you may even remember a group in the late 1990’s consisting of Texas rappers Grimm and Rasheed who humorously called themselves “WetBlack” and released an album by the same name. For those of you not familiar with WetBlack, Grimm and Rasheed were very serious rappers who were pursuing their own solo careers and were probably pressured by their label to come together and record that album. Because of the contrived nature of that album, the material the two produced wasn’t very good. Thankfully, it is easily evident from hearing Cmpdre that they were not pressured into recording this album. The two emcees share a consistent vibe throughout the album that can only be achieved through true chemistry.

Cmpdre’s style can best be described as laidback, almost easy-rock rap. That is not to say the group doesn’t address serious topic matter or lacks substance. But musically the group’s beats consist of a mix of slower tempo tracks layered with guitars and other seemingly live instrumentation. Topically, the crew does get into more political matter on two or three tracks, but outside of that they stay focused on songs about relationships. The music actually works well with the love songs that make up the majority of the album and tends to sound out of place when coupled with more political topics.

“My Eyes Part I” and “My Eyes Part II” are the two main tracks where the crew takes a political approach. “Part I” isn’t bad but at times sounds like almost every other political rant against the Bush campaign I’ve heard in the last 6 years. I hate Bush as much as the next man, but sometimes rappers can state the obvious too often. Other tracks offer a change of pace, such as “Used and Abused” where the group relates their tale about and relationship with hip-hop, ups and downs included. “Weed Go” is the obligatory song about Mary Jane that is included on almost every rapper’s album. The emcees can also sing so they throw that into the mix during this track, but overall it comes off as a bootleg version of B.O.N.E.’s more stellar and hypnotizing smoker’s anthems.

The group’s forte, and the subject they spend the most time addressing, is that of relationships. “Time” sounds like a smooth track to play when you’ve messed up with your girl and need to apologize. But if you listen closely you’ll hear why you would never want to play this for your girl unless you were an idiot. During the hook the singer expresses that he’s “the kind of guy to treat you right, MOST of the time.” Even if you’re a habitual cheater and your girl knows that, you NEVER want to admit that you might mess up sometimes. “ICU” features a funky, tropical beat where the crew straight up kicks it to the ladies. It’s not a bad track but nothing new. “Good Thing” features an intro that explains the crew’s goal very well. The group takes the audio from Steve Harvey’s routine on “Original Kings of Comedy” where the veteran comedian is complaining about how hip-hop doesn’t sing about love. Knowing that they are inspired by Harvey makes it clear why the group has a laid back vibe.

“California” is not a bad album but it is also unspectacular. Wes Krave and Absolom Jones do their best job behind the boards and on the mic, but given the topic matter that makes up the majority of this release they faced an uphill battle. Sure Steve Harvey complained about hip-hop not singing about love anymore but he also failed to mention what happened when Motown was in its heyday. You usually had about one hit for every 20 singles released and you had much more forgettable music than you had classics. Cmpdre’s music falls in that murky area of music which is not great but not bad either. There’s room for improvement and Cmpdre’s smooth formula has plenty of potential, but it still doesn’t match up to today’s best R&B or Rap.