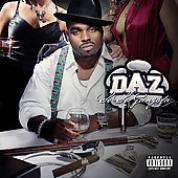 Daz :: So So Gangsta

Call him Daz Dillinger, Dat Nigga Daz, or just plain Daz if you like. No matter which handle you use, there’s only one Delmar Arnaud. Already a legend in the rap game at the young age of 33, Daz has been putting beats to the rhymes since 1992, back in the heyday of Death Row’s brief ascendance to kingpins of the rap industry. Daz was more or less guaranteed a spot in the crew by virtue of being Snoop Dogg’s cousin, but his ability to lace tracks and spit hard rhymes made him a virtuoso of West coast gangsta shit. In fact Daz’s reputation grew so quickly that some argued he was “ghostwriting” beats for more famous producers and being paid under the table so they could put their name on his shit. By linking up with the charismatic Kurupt and creating a rap group named after Snoop’s crew, Tha Dogg Pound quickly moved up in both artist respect and chart position. Undoubtedly you know the rest of the story – Death Row crumbled, the once amiable partners had creative differences, and everybody started releasing their own shit. Daz and Kurupt have managed to re-unite several times since with mixed results, but Daz is better known these days on his own, dropping beats and rhymes for dolo.

The track record of albums he has authored or co-authored since leaving Death Row is fairly extensive, but the ability to complete a catalogue of these albums can be challenging to even hardcore fans. His independently released albums have gotten better distribution than most, but you’re still not going to find them in large chain retailers like Best Buy and Target. For that reason as much or more than any Daz has joined forces with fellow rapper/producer Jermaine Dupri and joined the fold of So So Def Recordings. Some might presume that’s a mismatch since J.D. is known for crossover friendly hip-hop and R&B while Daz is known for some of the hardest G shit on the planet, but “So So Gangsta” is only an indication of their joint partnership and not of Daz changing up styles or going soft. In fact when you consider that the first single to chart is titled “On Some Real Shit” and features a guest appearance by Rick Ross, it’s pretty evident that Daz is still Daz and ain’t a damn thing changed:

Daz: “Got straps simple as dat, hand on the trigger
Need 30 mo’ ohhhhh’s, to add to these figures
See my neck’s so heavy, gotta shine up the Chevy
See ya betta stay wit it or ya gon’ get wet
Stay in the fresh shit, new fly kicks
Hundred thousand dolla whip, nigga don’t set trip”

Ross: “It had to be a rope chain, started wit the dope game
All about the cocaine, tired of bein po’ mayne
Cracks in a nigga roof, buckets just to catch the rain
Sellin crack on the roof, buckin just to get a name
Now I’m crackin a roof, open up the Bentley brains
No flaws in the stones, iced out e’rythang”

The beats are tight and so so right this time out. “Rat a Tat Tat” sounds like a throwback to the “Dogg Food” days for all the right reasons; speaking of which posse’s ALL IN for the epic “DPG Fo’ Life” featuring Kurupt, Snoop Dogg and Soopafly. THROW UP THAT W! Kurupt’s also down for the smoothed out “Money on My Mind,” while fellow West coast legend Ice Cube can be found spitting verses with Daz on “Strizap.” It’s not all G’d up though, because Daz still knows how to kick a song about partying and as such collaborates with Johnta Austin for the chillout anthem “Weekend”:

Daz: “I had to immediately hit her with some West coast game
Cause uhh, all these people screamin – what’s yo’ name?
And uhh, buyin roses and the best champagne
She can see through the glass that yo’ ass is lame
She cool, but she ain’t trippin off no cash flow
Cause she went to school but still puff puff pass though
Right up my alley, as we sat there shootin the shit
I broke it down broke it down to the shorty like this”

For those looking for an advanced degree in political science or philosophy, sorry this ain’t your fuckin’ album. For those looking for the best written lyrics with the most advanced concepts, punchlines, and rhyme schemes you picked up the wrong fuckin’ shit. Ironically even though Kurupt got the most credit as the lyrical kingpin during Dogg Pound’s first run in the early 90’s, Daz knows how to keep a beat and stick to the script without fucking shit up; while Kurupt often overexerts himself so much he ends up rhyming “bitch” with “bitch” and looking like a clown. To put it simply, Daz exerts cool. He doesn’t have to try the hardest to be the hardest – Daz is just Daz, or as he says on the album’s closing track when you hear his rap you go “Dat’s Dat Nigga.” If you’re looking for some certified fly West coast shit it’s hard to go wrong with “So So Gangsta,” easily one of Daz’s best solo albums of the past 10 years.