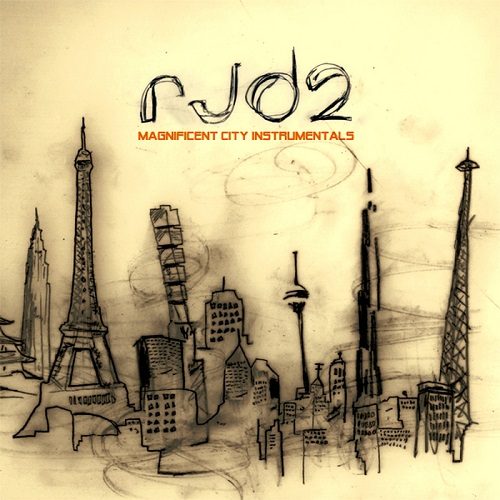 First things first, mad props go out to writer Tom Doggett, who covered the original “Magnificent City” release by Aceyalone & RJD2 for this website. Homeboy’s currently on a summer long trip to South America for both the cultural experience (always good to broaden your viewpoint beyond the narrow confines of the United States) and the humanitarian work he can do. When he comes back this fall be sure to give it up to the D-oh-double-G-E-double-T for everything he’s done as a contributor, and just for being a hella cool cat in general.

Second you’re probably wondering why “Magnificent City Instrumentals” justified a seperate review, especially given that Mr. Doggett already gave RJD2 a 9 out of 10 for the production work the last time around. Feel free to take your pick from any of the following reasons:

There’s probably a little bit of truth to all of them, but the reason that sticks out most in my mind is simply because Decon Media decided to release this album to stores. More often than not instrumental albums are the exclusive purview of the DJ, distributed to them as white labels or unofficial “for promotional use only” CD’s so they can do blends during radio shows and/or make mixtapes. The fact that they would go to the trouble of releasing an instrumental version of “Magnificent City,” relabel it as an RJD2 album and distribute it nationally is the story in and of itself. There’s no question RJD2 is a genius – we’ve consistantly stated so on this website in review after review and he’s yet to produce or release anything that proved this thesis wrong. Decon clearly thinks so too. They feel that the reputation RJD2 has at this point is so strong that they can repackage an already good Aceyalone album as “Beats from RJD2” and it will sell to both hip-hop fans and lovers of good music in general.

They’re right. “Magnificent City Instrumentals” is worth owning even if you bought this album and feel you already heard his beats the first time. I did too, but stripped of Aceyalone’s lyrics there are subtle nuances I couldn’t possibly have picked up the first time. There’s some funky freestling at the end of “Mooore” that I completely overlooked. It’s amazing how good the swinging jazz and horny horns of “All for U” are when presented on their own. Doggett talked about sleigh bells when covering “Caged Bird” but instead of being a backdrop to the rap they suddenly came blazing to the forefront on this CD. Fucking SLEIGH BELLS. Only RJD2 would think of using an element like that on a hip-hop track, and God damn it they fucking work. Every producer with the same cliched West coast funk, Dirty South bounce and New York grit should listen to this shit and take notes. The creativity displayed in the short, static laced and sublimely sweet “A Sunday Mystery” is better than four out of five beats on any recent rap album – take your pick. Try not to let your neck snap or toes tap during “Junior” and you will FAIL – it’s impossible to resist the snappy drums and layered melodies which build to short and incredibly beautiful flute and singing samples. TOO DOPE.

If Decon Media and/or RJD2 set out to prove a point with “Magnificent City Instrumentals,” I’m happy to say that they succeeded. This should not be taken as a knock against Aceyalone, who is still one of the greatest and most underrated hip-hop artists of the last 20 years. In fact with all due respect to my man Tom Doggett the one beef I had with his review was only giving Aceyalone a 7.5 for lyrics, but he’s not on Acey’s jock like I am so quite possibly that is the right score. Nevertheless the “Magnificent City Instrumentals” just goes to show that RJD2 really doesn’t need to work with a rapper, not even one of Aceyalone’s high caliber, to create an outstanding album worth buying. His music can always stand alone but should never be left alone, and you owe it to yourself to pick this one up.