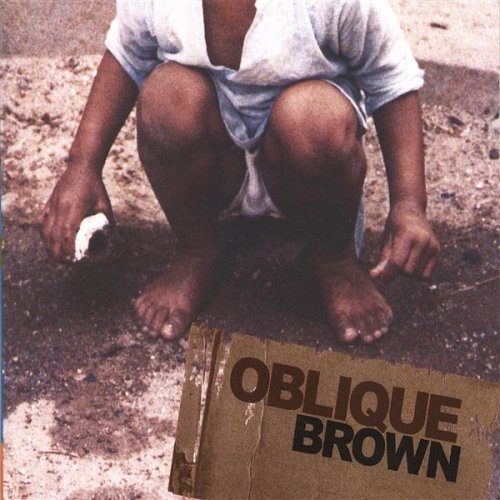 When you spend your summer days surfing the airwaves to the latest hits, it can prove quite difficult to tune in to music that isn’t out to please everybody. It doesn’t even have to be the most spaced out, staggering, off-beat, freaky audio experiment, sometimes even the slightly different will catch you off guard. That’s when you realize that commercial tunes are making it too easy, mind-numbingly easy. They seduce you and sedate you into a state where instant gratification is guaranteed, where simplification and streamlining are principles even the youngest practitioners learn to adhere to and pleasurable beats make your head nod only for so long until you begin to nod off.

In that respect, Oblique Brown’s self-titled debut offering proves to be a wake-up call for anybody caught in the summer daze. Rapper Chee Malabar injects a healthy dose of lyrical venom into his rhymes, treading no gray area when on aggressive cuts like “Thoroughbred” and “Smoke & Mirrors” he indicates only two options for rappers, to “baffle ’em with brilliance or dazzle ’em with bullshit.” Getting right down to business, the opening “Silent Scream” vibrates with anticipation, building up without ever turning into more than a brooding background for the lyrical display. Which is as vivid as it is figurative, the MC’s serpentine thought process not always being easy to follow: “My pop’s perspiration wrote this verse on the train as the cops lurked the station / searchin’ for a brown-faced cajun / baggin’ Arabs, blacks and South Asians.”

True to rap’s origins, “Oblique Brown” looks at the world from the perspective of the underdog. “Guess I’m a one man terror cell,” Malabar quips in “Silent Scream,” before opening up the rap industry indictment “Smoke & Mirrors” with the commentary “Live from Aljazeera… MTV won’t play my shit…” Turning up the vocal volume even higher on this second track, the NY resident vents his anger about a trade where “posthumous product means monstrous profit” and promotes a regime that’s sure to trim the fat off any corpulent corporate rap star: “Drink wet cement mixed with hot tar / so everything I spit’s concrete, dog, I rock hard.”

Born in Bombay and raised in southern India, Malabar arrived in San Fransico at age 12, not an easy age to adopt to such a completely different environment. It was hip-hop that bid him welcome, to the point that he cites early Ice Cube and Hieroglyphics records as a (language-) “learning experience.” In 1994 he moved to New York, but maintained his ties to the West Coast, recording two albums, 2002’s “Middle Passage” and 2003’s “Wince at the Sun” with his high school friend under the name Himalayan Project.

In 2006, Oblique Brown births an angrier, more aggressive rapper who just when you wish he’d disable his attack mode, does exactly that. Although not a solo project, it’s evident that with Oblique Brown, Chee Malabar is trying to make a name for himself as a rapper, keeping things strictly between himself and producer Zeeb. “I’m the man that you think you are,” he exclaims triumphantly in “Thoroughbred,” as Zeeb provides him with a spectacular, funk-tinged, rock-infused track over which he gets to show his expertise in riding beats, in this case standing tall against even ear-shattering noise levels. He’ll refer to it as “hijack[ing] your train of thought and Colin-Ferguson the track.”

The profile building continues on “Chee Malawho?” where the rapper’s biting commentary is draped in lush, exotically colored curtains:

“Man, I’m livin’ for this rap shit
But half of it’s slapstick, and no one crafts a classic
It’s four-finger rings, Benzes, spinner rims
Cause America won’t buy it unless we pander to its ignorance
Cause if it’s filtered through intelligence
they’d have to stare square at the ivory tusked elephants
in the room, and I’d guess you’d be relevant
But nah, stick your ass out so your sponsorship can poke it
As I cram a phrase in this space till the page is claustrophobic
and it leaps off in angst and hope like Monster Kody wrote it
Listen homey, sign over the check and run it
I ain’t the one, I’m ALL of URB’s Next 100″

The mid-section of the album’s 40 minutes is occupied by two political songs. “Four More Years” consists of one verse set to an odd mixture of commercial drums and off-key pianos. And although Malabar makes a great entrance with “I’m two rhymes away from a hard, cold cell’s view from Guantanamo Bay,” the rest of the song epitomizes impotency in the face of the powers that be. The following title track works in subtler ways. In the tradition of narratives like Compton’s Most Wanted “One Time Gaffled Em Up” or Brand Nubian’s “Probable Cause,” “Oblique Brown” details an unfortunate encounter with the law. If Chamillionaire’s “Ridin'” is your idea of a rap about dodging traffic patrol, check this example of why you might want to avoid to attract the attention of cops even if you’re not ridin’ dirty:

“A white boy rock a beard, he’s considered rugged
and if I sport one, I’m a threat to the public
(What you got in the trunk, any guns, drugs, explosives?)
Nope, got some CD’s, though, that you can keep as coasters
(Where’d you come from?) Right around the corner!
I just rocked a show, man, go ask the owner
(Hm… you had drinks, even one or two Coronas?)
No, I’m an orgon donor but it’s too early to be one
(You ever been to jail?) Nope (Well, you ’bout to be once)
On what charges? (Any charges I choose, fuck
DUI, resisting arrest, disorderly conduct…)
Yup, guess I’m America’s worst nightmare
Cause I’m young, brown and look Middle Eastern, yeah
Now (Get out the car, hands up, knees on the floor)
I said, My sister went to Seton Hall, I know about the law!
He’s like, (Dude, your face IS probable cause)”

The drama continues, and combined, the rapper’s detailed tale and his producer’s thoughtful beat make the title track a highlight on “Oblique Brown.” While that song features once more a worried vocalist, the remaining tracks treat us to a much more content Malabar. Various writing techniques are employed, the most sophisticated in “Snapshots,” where he takes us on a walk through Brooklyn to lead us to the doorsteps of a love interest. “What Remains” is the token indie rap thank-you track. “Coffee & Cigarettes” sees Chee going back to Cali to hang out with his old pals, taking a break from the everyday stress and finding inspiration. “I Made It,” anchored by a vocal sample and featuring a bass seldom heard in hip-hop, is a look back at stormier days and just a mature way to close an album.

“Oblique Brown” is highly solid, raw indie hip-hop. Occasionally, it can be a challenging listen even to experienced ears and the production more often than not has a certain makeshift charm to it, yet the duo plays it comparatively safe, paying almost conservative attention to detail when switching up the flow for a hook or searching for a melody to fit the mood of a song. With his Opio-meet-Boots Riley delivery and demeanor, Chee Malabar combines youthful expression and seasoned sarcasm. Thankfully, the album changes its mode of operation halfway, as if the rapper remembered that he described emceeing as his hadj and decided to give the jihad a rest (both terms used in a strictly metaphorical sense).