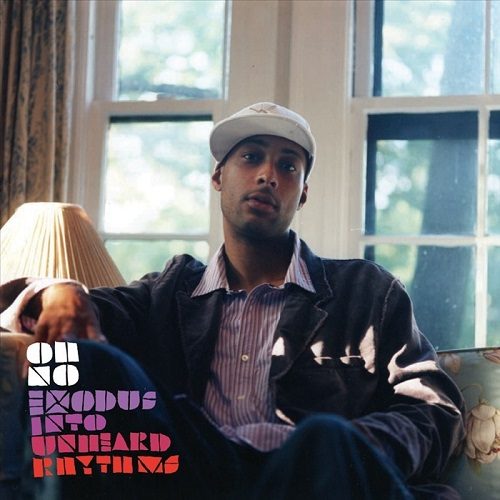 I was lucky enough to interview Oxnard’s Oh No, the ridiculously gifted producer, emcee, and brother to Madlib. With two stellar album-length achievements already logged in 2006 (Roc C’s “All Questions Answered” and his own highly creative mining of Galt MacDermot’s catalogue, “Exodus into Unheard Rhythms“) Oh No (Mike Jackson) is showing no signs of slowing down. In this RapReviews exclusive he speaks about his record label, his brother, his creative process, his recent work, his hopes for the future and his favorite blunt flavor.

Andrew Matson: What do you hate the most about music right now?
Oh No: The fact everything is genric, mimicked, cloned and sounding the same. There needs to be more of a diversity in the sounds that we hear.

AM: What do you love the most about music right now?
ON: I like that music can give you emotions behind it. Whether its good, bad, or ugly.

AM: A lot of people admire Stones Throw for releasing material that most labels wouldn’t know what to do with. What kinds of chances do you think Stones Throw is willing to take that other labels don’t or won’t?
ON: Nothing on the label really sounds the same as the previous. I think that they like that. They appreciate music for what it is.

“I think some of the peoples that are used to the stuff Stones Throw puts out were surprised by the fact that he’s so raw.”

AM: What do you think about the ongoing trend of instrumental hiphop albums?
ON: I like that it gives a producer his time to shine. It gives him a way to show his skills without an artist or vocalist. Its his album. It’s a great thing. It also helps out other artists so they can write to it.

AM: What do you think about what your brother (Madlib) has done to genre definitions?
ON: My brother doesn’t do definitions. He hasn’t any, but he’s shown that you don’t have to be just one type of producer/artist.

AM: Can you talk about your brother’s influence on your own style?
ON: Major influences. He’s showed me to do what I’ve got to do. He schooled me with his great knowledge of Jazz and Hip-Hop.

AM: How much material are you sitting on that’s ready to release?
ON: I’ve got at least 20 albums worth of instrumentals and a few solo albums.

AM: Are you naturally prolific, or do you force yourself to create?
ON: A few blunts and its on. I mean there’s days when I can make 10-20 beats when I’m in the right mindframe. Usually its from the herbals or from me beating a game. I’ll jump from my home arcade that I set up, into the studio. And rock it from there.

AM: What’s more important to you: building with the Stones Throw roster + your Oxnard crew, or getting your beats out to as many emcees as possible? Are the two mutually exclusive?
ON: Both are just as important. Not only as a business stand point, but for a personal thing too. All my homies from Oxnard are already my homies, you know? I want to get my catalog up, and Stones Throw has provided me with a good home for the past few years, so its been really fun. I also want to work with a lot of people out there, so I want to get my beats off. I like all the relationships I’ve built with a lot of these artists that I’ve worked with. I do whole albums with cats, I do singles with people. I wanna try and do it all. Shoot, I’ve produced two videos for Stones Throw.

AM: How did you come to start listening to Galt MacDermot, and how did the idea for an album based solely on his samples come about?
ON: That came from Egon, over at Stones Throw. He was working with Galt, sent me some of his stuff, and I flipped like 27 beats within three days. He went back to Galt, showed him my stuff, gave us the ok and the rest is history.

AM: What about his music impresses you most?
ON: How funky and ill it was. He composed really complex songs, and it gave me a lot of inspiration and ideas.

AM: Is Mr. MacDermot underappreciated?
ON: Galt is mad underappreciated. I mean musicians/producers like me know about him. Just Blaze was hyped when he heard about it. Large Pro was when my manager gave him the cd. He’s been sampled a decent amount, so we appreciate him. I’m not sure mainstream has given him his fair dues. The man is a legend.

AM: Do you hope your album encourages people to check out his work? Is that part of your mission?
ON: Most definitely.

AM: Why is his music such a good source for sample-based re-interpretation?
ON: You can take one of his songs and make like 3 beats out of it cause its so complex and diverse.

AM: What was challenging or pleasurable about sticking to one musician’s musical catalogue for all your samples? Would you do it again or is this a one-time thing?
ON: I’d definitely do it again. I even have a second Galt album ready if we can do it. We’re actually talking to someone else about another project, so we’ll see what’s up.

AM: Is “Exodus into Unheard Rhythms” a concept album?
ON: It is, but it isn’t. I mean the overall idea behind it with just one person’s music to sample throughout the album. I think that’s a first. But it isn’t because I’ve been trying to do a comp like this for a minute now, and it finally just worked out that I could do it with Mr. MacDermot’s music.

AM: Which emcees really surprised you on the LP?
ON: I was more impressed than surprised. I knew who everyone was before cause most of us worked together. I know it was official when Posdnuos, Wise Intelligent, Buckshot jumped on board also.

AM: Are you concerned with pushing the artistic envelope, or are you just trying to make music you can feel?
ON: Both.

AM: How do you hope this album is received?
ON: Man, I just hope everyone appreciates it, that I sell like 300,000 and that’s all. Nah, I just hope everybody is feeling it. I’ve got stuff on there for everyone and I tried to use MC’s from all over, so everyone gets the feel of what’s going on out there.

AM: Do you listen to critics? If so, who do you listen to?
ON: Nah, just myself. I’m hardest on myself. I’ll hear one thing that I hate, and then someone else will like it, and I’ll be shocked.

AM: What are you listening to these days?
ON: I’ve been banging Roc C’s new album All Questioned Answered since it dropped, Kankick Serious Buisness. This and of course my newest beat cd #132.

AM: Who will you be collaborating with next?
ON: Whoever. I’m down to work with all sorts of cats. Large Pro get at me!

AM: Do you prefer strawberry, peach, or regular blunts?
ON: Regular, I don’t need any of those extra additives. Regular to the max.