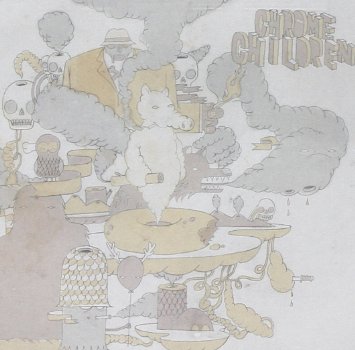 First off, know that “Chrome Children” is a two disc deal, half of which will be discussed here. One disc is a mixtape presented by Peanut Butter Wolf, and the other is a Madvillain concert DVD produced an edited by the [adult swim] people.

The DVD was not sent to me in the mail so maybe it is not finished, but I’m already building ridiculously high expectations. Those that have seen him live know DOOM translates well on stage, deftly preserving his trademark balance between straight-faced comic energy and unflappable, icy cool. His mask grants some degree of self-styled visual spectacle, but the way he waddles around, posing, vogue-ing like some sort of … triumphant … army general? Caveman rap star? I don’t know, but it’s really something to see. Also cause for celebration is the feat of prying Madlib from his house onto a stage. I can’t wait to see what [adult swim] can do with the packaging and presentation. My expectations are way too high, but that’s not my fault: Madvillain is elite hiphop and [adult swim] is elite smart-ass comedy. Best believe I’m bout to blow an ounce to that.

What I do have is the Wolf-helmed mix CD, which is basically a State of the Union Address for his camp. Boy howdy, the state of the union is strong. Everything affiliated with Stones Throw gets its shine.

The most rugged raps come from Guilty Simpson, Roc C, Percee P, and MED, while the always intricate MF DOOM (I’m not yelling- it’s all caps son) whets appetites for the upcoming sequel to “Madvilllainy.” Blunted barons J. Dilla (PEACE) and Madlib rap over each others’ beats. Georgia Anne Muldrow and Aloe Blacc give totally different but absolutely virtuosic examples of multitalent. Koushik, J.Rocc and newcomer/ex-intern James Pants hold down the instrumental, outside-the-box grooving. Gary Wilson logs pure lite-porn soundtracking, while Soul Cal’s Pure Essence (no doubt one of Egon’s Now-Again Records rescue missions) completely saves the genres “raw disco” and “modern soul” from utter nerdery. Dudley Perkins shows up like everyone’s favorite dusty uncle, Madlib dares to invoke his “Young Jazz Rebels” moniker for a few adventurous minutes, and an old Baron Zen track pops up to remind everyone that, as far as PB Wolf and Stones Throw has come, it was built around smart people having stupid fun.

Guilty Simpson (I think he’s one of Dilla’s Detroit homies) is a beast. He kills “Clap Your Hands,” a Dilla beat that any emcee would treat as a gift. Jay Dee’s suspenseful street-cinema has that trademark nod-factor, but the drums drip with the type of organic boom he didn’t fully embrace until he drifted into the Stones Throw fold. It’s latter day Dilla, but focused. Simpson rises to the challenge:

“And it’s a fact when you black
that you don’t know how to act
when your belly-button’s touchin’ ya back
that’s why a lot of us fuck with the crack
cause it’s the easiest way to double ya stacks
and all the hoes scream, “Where the hustlas at?”
usually the pretty chick with the bubble in back
word to Dilla dog, I’ma get it all
combination safe behind the picture on the wall
even though Moms raised me right
I swear to God rap shit saved my life”

Dilla strikes again on the definitely Madlib-esque “Take it Back,” as the Bad Kid gets all nostalgic on the vocals. It’s good to hear Madlib rhyme with direction; when on-topic, he’s got real microphone presence. On a similar tip, Oh No produces for himself and, on “Oh Zone,” flips a loose retrospective. It’s cool to hear him reminisce about his ultra-musical family hanging out with Dizzy Gillespie, smoking, dancing…the Jackson family has been making the scene for more than a minute, and it’s really nice to hear Oh No just sit back and appreciate that.

Dudley Perkins rides a terrific JRose beat (who is JRose?) and makes “Whassup World?” a standout cut. Koushik and Aloe Blacc are really on their mind-expander game right now. Both, on “None in Mind” and “What Now,” prove that smoothness has a place on Stones Throw: not everything has to sound like dusty funk bits stitched together with yarn. Roc C and MED impress me with their tracks “Movin” and “All I Know.” I’ve underestimated both of them in the past. I like Oh No’s beat under Roc and Madlib under MED- I think those two teams have a similar dynamic. I also love, love, love Percee P and Quasimoto rapping together. They might not need to get together all the time, but Quas’ sqeaky arrogance finds a bizarre foil in Percee’s relentless syllable spree, giving the track, “Raw Heat,” a chance to play careless/focused like sweet/sour. Word.

One gripe: I’m not feelin’ the Georgia Anne Muldrow cut because it sounds the same as everything else she does, which is too abstract to really grab me. Oh, my bad…I mean I must not “get it.” She is clearly too talented not to have a record deal, but her penchant for turning every track into a post-everything impressionistic throwdown speaks less to her (I’m sure) gloriously multihued artistic potentiality spectrum and more to (easily treated) ADD. She can’t help herself. She’s young and gifted.

Of course, the main question is “What’s up with the Madvillain cut?” Well, I’m happy to say that Madlib’s beat for “Monkey Suite” is jaw-droppingly good. It’s got it all: an oddly propulsive stand-up bass line, sinister organ groundcover, and tweaked melodious key fragments. Every element is well-worn, but the groove is airtight. The rhythm hits hard and deep, eschewing bamboo-snap snare-cracks for an erogenous, tectonic groove. The whole thing trembles at Madlib’s fingertips, fading in and out in a deliberate display of magnificence. DOOM kills it and I know you want to know how, so here’s how:

“When he sees the mask and the microphone gizmo
he’s the broke host, this is like his own quiz show
this go out to all my brothers doin’ long bids
and sisters who got brothers being fathers to the wrong kids
stay strong and ride like the funky flu
won’t find the Villain in the street inside no monkey suit
…
in participating places tip your waitresses
a sure-fire way to wire-trip the matrices
…
tussle the hustle cut ya dank with dirt
won’t be in the club in no muscle-tank shirt
you can find him in the pub with the grub stain
chuggin’ on a small tub of pain to his bugged brain
sayin’/sane some say he plumb crazy
amazed at how he still gettin’ paid but dumb lazy”

The mix does everything it should do: highlight, over a not-too-long 19 tracks, the stunning diversity of the Stones Throw roster plus, a la that Nature Sounds comp with the Ghost/DOOM song, offer a morsel of an upcoming, monstrously anticipated LP. The Baron Zen and Young Jazz Rebels cuts close out the mix, and though both are bugged out in entirely different directions (retarded and sophisticated), the tracks hammer home the point that this is a Stones Throw affair and anything is possible. This half of the “Chrome Children” package is dope. Stones Throw is intimidating. Watch out.