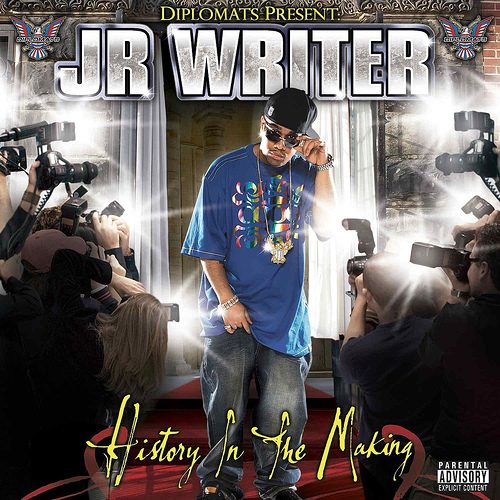 JR Writer :: History in the Making

The Diplomats are one of the most perplexing cliques in all of rap. Their leader Cam’Ron has spit some of the doo doo dumbest rhymes in all of hip-hop history, but still has an impeccable knack for making hits and has become more and more popular as the years have gone by. Some of his DipSet followers want to emulate both his penchant for bad lyrics and career success and do both quite successfully, while other Diplomats seem to have untapped potential for greatness that could come out with a little polish to help them shine. Until now the standard bearer for the second group has usually been Juelz Santana, but a lot of DipSet fans will tell you “JR Writer is THE TRUTH” whether you’d recognize his name or not. In truth there’s no reason not to know him by now unless you don’t buy any DipSet albums, because he’s usually featured several times on each one, but “History in the Making” is his first chance to step in the spotlight and see if he is indeed polished enough to step up on his own. I’m not sure if I would have done that by naming a song “Zoolander,” given that it references one of Ben Stiller’s worst films ever, but I’m not in the DipSet:

“My mathematics smash it, I bag it pack it
A packer’s pass to the crackers, the bastard’s actin erratic
A static half of a savage to have it back in they cabbage is ‘matic
After they had it and add it, back to the attic – faggot
Ask I’m the baddest of baddest, gather your baddest of rampers
Scrampers to clampers don’t matter, half of them bastards I’ll splatter
Cap in his bladder, you’ll stagger, mac to a ‘matic he’s platter
I’ll feel for ’em (slow down son you’re killin ’em)
Uhh, yeah, the kid with the thunder, slip from up under
The stunner, runner runner fronter, just admit I’m a gunner”

Well at least he’s proved that he’s got the assonance technique down. The Dame Grease beat is okay but nothing special, and I still don’t get how Ben Stiller ties into this song – oh well whatever. Maybe “Byrd Call” featuring Cam’Ron will make a little more sense. Take two!

“I still be where the weed flip, in the P’s wit the trees lit
So much water in the order it’s just leavin ’em seasick
Wit a ski in my V6, tryin to skeet on a B lips
Down low, like I’m tryin to keep her a secret
Acura on chrome, passin me dome
Next minute, shit I’m finished, she’ll be flaggin it home (cab)
But I always keep a straggler that’s known to bone
and run through a lap, faster than Marion Jones”

That’s a little more impressive, although I still feel like there was an awful lot of set-up just to deliver one half-decent punchline that a lot of people who don’t follow the Olympics will miss altogether. I gotta give it to JR though, he is for the most part trying to flip different styles cleverly, but he seems to be one of those rappers who is decent at most of them without being singularly outstanding in any one of them. As Olympic references go that would make JR Writer the Bruce Jenner of the DipSet. Is it enough to win him a gold medal though? The beats supporting him in the background are a mixed bag. Some like the Doe Boyz track “My Life” are blatant rip-offs of the style Kanye West popularized, but still work anyway given JR can make something of them. Others like Knoxville’s “Back Wit It” seem to have a lot of thump but never do anything interesting with it, resulting in an overly simplistic track that seems to force Writer into overly Cam-like rhymes: “You’ll get injured Duke, peel off your gold/peel off or peel off, I peel off your soul/then peel off your soldiers…” and so on. Here’s a tip for JR – imitate Cam’s success and NOT the worst parts of his rap style.

I’d like to say JR Writer delivers the goods but at 19 tracks long this album just drags on, and a bonus “CD Mixtape” really doesn’t help matters at all. Writer is as perplexing as the Diplomats themselves, seeming to be capable of more than he shows here, but not taking the torch and running with it once given the chance (had to slide in just one more Olympic reference). I’m sure JR Writer will be shining in the future but for now he needs to rethink the beats and get some better rhymes.