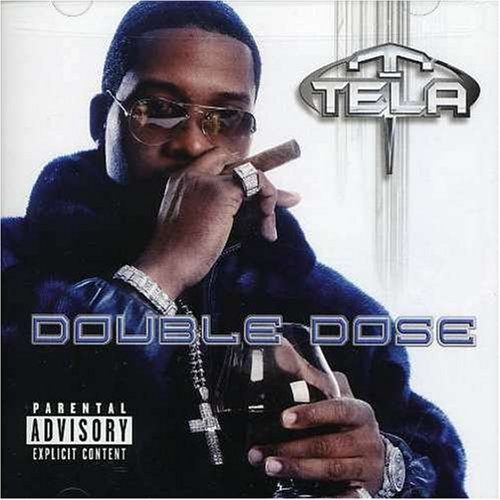 Rap-A-Lot Records may have changed over the years, but they’ve always remained consistant about three things:

A lot of whack rappers have released albums with liner notes thicker than “Gone With the Wind,” so most could care less if Rap-A-Lot puts inserts one page thick or less in their shit. The only thing that matters is the rappers be tight, and the Southern swang and slang is in full effect. Tela embodies those qualities – a rapper who has consistantly made albums for people South of the Mason-Dixon line with little or no concern for how well his albums crossover in New York or Los Angeles. Ask rap lovers in the dirty-dirty and they might cite “Piece of Mind” and “Now or Never” as hip-hop classics, ask anybody North of his hometown Memphis and they might say “Tela who?”

2002’s “Double Dose” is not likely to change that status too much. That’s not in any way due to weakness on Tela’s part. For starters, his collaboration with producer Slicse T on seven tracks, Drummaboy on three, and an assortment from Mike Dean to Jazze Pha on the rest hits home consistantly. It’s a rare pleasure to hear songs where the beats are specifically matched with the lyrics to create emotional responses, and track after track showcases this careful forethought and planning. The “Intro” has a subdued and reflective backdrop which gives Tela ample room to get personal and ACTUALLY introduce himself to new listeners, as well as relate to already established fans. “Pimp Bitch” has the bounce you’d expect from it’s title, while being less misogynistic than you think; a Bun B cameo is the icing on the cake. “Incredible” is a tale of mind-blowing sex, and the result is a Slisce T beat that sounds like raunchy R. Kelly at his finest.

At this point Tela’s already three for three, so it becomes redundant to say how well meshed the tracks are; this harmonious union just repeats itself ad infinitum throughout. What’s more important here is to establish what Tela is like to the know-nots. Vocally he flows a bit like Scarface and nears MJG in his rap pitch, although he still has a completely distinct sound. His accent clearly marks him as 3rd Coast, yet he doesn’t unduly drawl words or slur lyrics with a mush-mouthed delivery. In fact clear articulation is one of the great hallmarks of Tela’s rap, and it’s a shame more people haven’t realized how much difference this makes between an average rap LP and a great one. Obviously Tela knows, as he’s only been getting better over time. He can even switch speeds on songs like “Round & Round,” and still remain easy to follow:

“Young Tela, none sweeter
Pimp harder, than Fila
I’m tellin y’all like Kelis, roam
If her mind ain’t grown and I just don’t need her
I need a runner, that can under-
-stand a man, needs that wonder
Drink goosey gone, in the Gucci throne
Bend over, make it clap like thunder
Good freakin, no sleepin
Run away just, the weekend
Like a fairy tale, she can read me well
Do the things that right they pleasin”

It’s true that Tela likes to talk about getting some play (who doesn’t) but his versatility prevents his topicality from becoming tiresome. “Dreams” is a cautionary tale about having your desires go unfulfilled featuring Bun B as a guest, while “Strive” is the mellow groove urging players to keep on hustling to get ahead in life. “Coco” is the story of a girl who grew up in an abusive family and turned into a dangerous dimepiece not to be trifled with. And “Tear it Up” is predictably a song about ripping up clubs, but what Southern rap album these days is complete without ONE song about getting krunk? What you may find the most surprising about this song is a guest named Lo Key who is a dead ringer for Ludacris:

“We gon’ tear it up and pull off a all-nighter
The piece, the chain, the Gucci attire
I’m hot and on fire, leanin through the do’, ten toes
Makin easy money pimpin hoes
I’m back in Memphis, that’s the business
No need to be greedy, I got mad friends with Benzes
The peach Pucker and Belvedere, mixed it vicious
A mean martini, everybody swished it
We all players, no haters allowed
I’m on stage throwin big stacks of paper in the crowd”

Truthfully, a lot of rap albums come out every year, and at times it’s hard to justify giving any of them a rave review because having so much product out waters down the listener’s ability to appreciate any one of them at length; besides the fact that so many are just plain mediocre. Tela has pulled off a trifecta though of having good beats, good rapping, and just plain good timing. With no new albums from other major rappers in the South right now, Tela may finally get that long-deserved national recognition contemporaries like Scarface and Trick Daddy have. If not, he’s still put out a fine album album you can enjoy now AND again in the future. He may just be Memphis’ best kept secret.