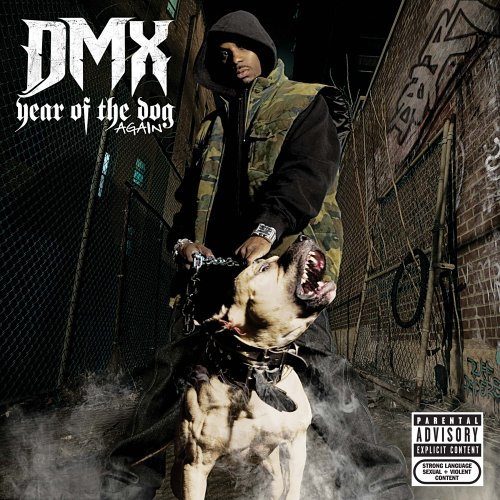 To be quite honest I wasn’t mad that I spent the better part of yesterday morning and afternoon stuck in airports and on airplanes. Oh shoot, that means I can’t cover the new DMX album until Wednesday. DARN. To be honest I’m no more excited about covering it today. The fact that DMX used the word “Again” in his album’s title suggests to this writer even he is aware of the fact he ran out of new ideas years ago. Against my better judgment though I spent $15 on this CD (getting a free promo from Sony Urban is like pulling teeth) and ripped it to my iPod with the thought that a day later I might give a shit. Earl Simmons and his co-hort Swizz Beatz proclaim DMX will bring the East coast back on the album’s first single “We in Here”:

Funny though, I wasn’t aware the East coast went anywhere. Perhaps the Boot Camp Clik suddenly retired? Or Nas said fuck it, no more new albums ever again? Maybe Akrobatik and Mr. Lif sold out and went pop, and Kool Keith moved to Toronto. Anyway the lines above make me want to scream at DMX “Is that the best you can do in 2006? HUH?!” but the truth is my problem with this song has much more do with the overly simplistic and boring Swizz Beatz track. He tries much too hard to make it interesting by syncopating DMX making noises in the background with the beat, throwing in random bursts of gunfire and sirens, but in the end he’s just adding condiments to a shit sandwich. Speaking of which, “I Run Shit” isn’t that much better musically or lyrically:

Yes X, you did – and to make it worse he has to emphasize the point:

“You wasn’t even fucking listening when I just said
What I said, you get that, what I just said”

Clearly DMX wasn’t listening to what I just said either, get it, what I just said. You’re boring in 2006. If you’d stop trying to drink every liquor store in the tri-state area dry and have ten million run-ins with the law each week maybe you’d realize bragging so much about your past accomplishments doesn’t really say much for what you are doing in the present. It’s that Ja Rule Syndrome – people who think they’re so big they don’t even have to put in an effort any more, people will buy the shit no matter what. There are very few songs on here that scream DMX isn’t just phoning it in. Dame Grease provides him some real heat on “Walk These Dogs” and X plus guest Kashmir sound up-tempo and amped up. Da Gutta Fam uses a nice mixture of piano keys to make up both melody and part of the bassline on “Goodbye,” and DMX’s nihilistic Tupac-like obsession with death at least stirs up some genuine emotion – although for the love of God don’t sing on the hooks. Love of God also plays a prominent role on the tracks “The Prayer VI” and “Lord Give Me a Sign,” but honestly when every rapper, actor and athlete says they’d like to thank Jesus Christ for his blessings it starts to ring phony. Does a Christian need to proclaim he is one every moment just to prove it’s so, and if DMX is so much of a Christian that he needs a “Prayer” every album how come the rest of his songs are about drinking, fighting, fucking and killing? I’m talking about monotonous songs like the Scott Storch produced “Give ‘Em What They Want”:

“This ain’t no new shit, told you when I met cha
Show some fuckin respect, knock before ya enter
Betcha, if its me that’s comin’ to get cha
It’s gon’ be a back down on that stretcher
For real, y’all niggaz don’t know pain
Cause y’all niggaz don’t know me and well that’s my name
Ain’t a fuckin’ thing changed still the same
Dog got dough but rob niggaz, yo we mob niggaz”

A three year lay-off has not done DMX any good. He was already in danger of becoming irrelevant on “Grand Champ” and now he sounds positively dated. His dark beats and menacing attitude won people over back in 1998, but if you’re still talking about the same subjects and not finding different ways to discuss them almost 10 years later that’s a problem. Perhaps it’s a good thing the year of the dog only comes along once every 12 years on the Chinese calendar because I won’t need to hear anything from DMX again before then.