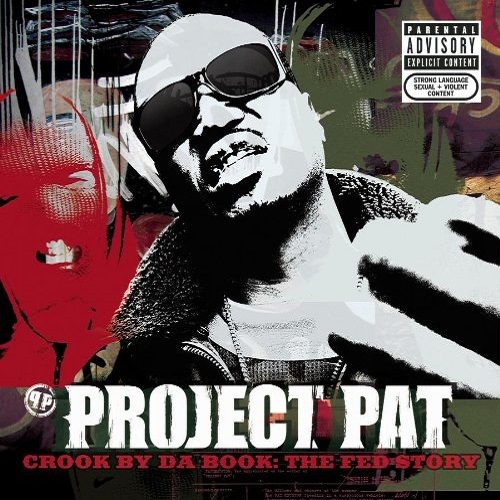 Project Pat graduated top of his thug class, and his reward was enrollment in Three 6 Mafia Academy. In truth Pat had been an understudy to the Memphis, Tennessee crew since their earliest days, popping up again and again on their albums, and even signed with their Hypnotize Minds record label in 1999 to drop his first major label solo album “Ghetty Green.” Despite this long track record he was never “officially” a member of the Three 6 Mafia until 2006, after Crunchy Black’s departure from the Mafia for both personal and professional reasons. Some folks would be mad that they only got in when somebody else got out, but Pat had just finished serving a four year bid for firearms posession in July of 2005 and could only look forward to increased success, prosperity and popularity. Besides showing their love by including him on their hit “Poppin’ My Collar,” Three 6 is once again all over his latest release “Crook by Da Book” both lyrically and musically.

In fact every single track in the liner notes to this CD was “mixed” by DJ Paul and Juicy J, so their Oscar-winning thumbprint is square on this disc. Now admittedly the term “mixer” is no more or less ambiguous than “producer” in terms of what the person listed actually did for the track, so it’s only fair to note that ‘Crazy’ Mike Foster is listed as “recording” all of this album’s tracks. Nonetheless if you had to describe the sound of this album, it’s a Three 6 Mafia album, and for Project Pat that turns out to be a good thing. The album gets crunk right from the start on “I Ain’t Going Back to Jail,” which layers up menacing pianoes, Southern bounce and hard bass for Pat’s unrepentant lyrical machismo:

“A North Memphis monster, targettin the cheddar
Ain’t no anna on my chest, it ain’t no blood on my sweater
Better beware the stares of them youngsters watchin
Bullets do fly through air when them guns puh-poppin
Pistol swang to ya mouth, then the blood is gushin
out’cha dome, home-invaded cause of dope you pushin
Leather seats in the Chevy thang, ridin dub slab
Wangin out the frame, South Memphis, cruisin Crunk Ave
Crook by the book, if I was on that type of time
Wipin shells on the bullets when, loaded in the nine
Crime done, on a daily pay attention to this here
I ain’t goin back to jail, and that’s what these suckers fear”

Similarly fat songs include the braggadocious hit single “Raised in the Projects” where Pat claims to make “money by the boatload,” the disturbed “Cocaine” which has Pat repeating “we can snort it, we can flip it” in the chorus (even Biggie knew you don’t get high on your own supply), the whistling “Crack a Head” and the energetic club smasher “High Off the Ground” complete with “vroom vroom” sound effects to emphasize just how Pat and his Mafia comrades floss their whips:

“Fresh up out the paint shop, wetter than a rain drop
I got ’em lookin hard, lookin lookin, real hard
A nigga still mob, niggaz out here still rob
That’s why I keep my killers close, with that thang cocked
I keep the brains blowed out, in a hard top
It’s so much wood in my ride, they call me tree top
Now I ain’t ridin Phantom but I tell ya what I’m in
A ’85 Box Chevy on some Phantom rims
Them fifteens got my trunk like a earthquake
I’m ridin through the hood mayne it make the earth shake
You average rim riders, y’all can go on, hit the benches
I’m ’bout to cut my fenders down and add some mo’ inches”

For a crew not normally known for their lyrical skills, Project Pat exceeds the Three 6 Mafia status quo and shows himself to be a competent narrator and storyteller. While he won’t win “Rhyme Writer of the Year” any time soon, and the topic matter is generally a bit tired and cliche for gangsta rap as a whole, Pat neither tries to exceed his ability with his ambitions or sink below them with overly simplistic raps. This results in a surprisingly pleasant experience, particularly given Pat’s the true star of “Crook by the Book” and keeps guests to a minimum. When they do appear they are used effectively – Beanie Sigel guest stars on “Purple,” Pimp C lends some U.G.K. flavor to the smoothed out funk cut “Cause I’m a Playa,” and Young Jeezy can be found rocking the menacing “Tell Tell Tell (Stop Snitchin’)” with Mr. Bigg and Lyfe Jennings. Of course it wouldn’t be a Three 6 Mafia release without some of DJ Paul and Juicy J’s goofy lyrics, and you can find them doin’ the damn thang on “Good Googly Moogly” and “Been Gettin’ Money,” but it’s here again that their beats make their otherwise ridiculous raps tolerable.

“Crook by Da Book: The Fed Story” is a study in contradictions, as Pat seems like a rapper who is capable of being more than a fill-in member for Three 6 Mafia but one who is also clearly loyal to his Memphis comrades and vice versa. They are more help than hindrance to his rap career, so this is not at all a bad match; in fact future Three 6 Mafia albums are likely to be improved by his having an increased role on the tracks lyrically. Pat’s biggest challenge will be to avoid the pitfalls of the legal system once again, to which I would suggest he leave the cocaine and the firearms strictly in his raps since the “Feds” already have him on their radar after his last bid in jail. Provided he stays a free man he will enjoy the fruits of his success on “Crook by Da Book,” as he can certainly write a book or two of gangsta raps worth listening to.