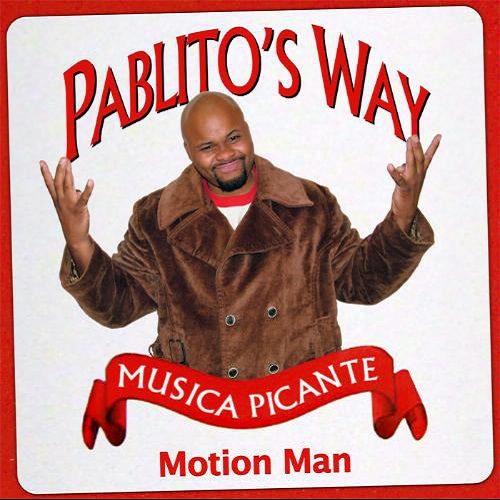 Frank ‘the Voice’ Sinatra’s “My Way” must be the most requested song at funerals, office parties for retiring employees, and high school reunions. Everyone wants to be considered special, but not many get credited for being a human being that did it ‘his way.’ Comparing the West Coast MC Motion Man to Sinatra will probably get me in trouble with the foundation that looks after his heritage, but he IS one of the few artists that boasts a unique style, flow and attitude. How can you describe that without offending Frank? “Pablito’s Way.”

When it comes to lunatic antics, few hip-hop artists can get on the same page as the Ultramagnetic legend that has more AKA’s than J.Lo has ex-boyfriends, Kool Keith. His partner in crime Motion Man comes as close as possible to that reputation. Really close. He’ll get up on stage wearing a Mexican spandex wrestling mask. He’ll take some time off to be Black Elvis’ (another Kool Keith AKA) own Colonel Parker in Dixie(Oak)land. He will put out a debut (“Clearing the Field”) that features himself on the cover as a West Coast plastic action figure.

Motion Man’s flow is as lively as his name suggests. He does voices, stretches his syllables, speeds up, slows down, and pretty much does whatever he pleases on the microphone. Other MC’s will do the same and sound all over the place, but Motion Man manages to fool around, and still keep his own blueprint style intact. He has been around since the late eighties, and has become a Bay Area champion more or less. After all, he was one of the first MC’s to grace the mic on the legendary Sway & King Tech’s Wake Up Show. Motion Man will not make great play with his veteran status at all, even though the reference to the Pacino gangster flick “Carlito’s Way” is fairly obvious. The chunky MC who equips a bass voice with a high-pitched twist sounds eager and crispy, with punchlines that have punch, and hooks that are still sharp after all this time. He tells it like it is on the bouncy “Confidence.”

“I tell you the phoniest people try at it
They need help from another artist to star at it
I retain the service and lushness of my own presence
I need me in the mix, mixed down the master
Look in the mirror for MC’s as a role caster
I’m gonna hide myself
Do everything, like a youngster
When he’s changing his life to go into a gang
I jump myself in
I put a beat on myself
Myself, knuckle up
I can’t cheat on myself
Myself, better than
Yeah, better than, better than
Adversaries and close brethren”

Kutmasta Kurt, who signed him to his own Treshold Records, thus saving him from oblivion, is the sole producer on this second album, as he was on Motion Man’s first. With his pounding drum patterns, heavy bass lines, and bizarre vinyl choices, Kurt is the right match for Paul Laster’s (Motion Man’s real name) quicksilver unpredictability. The only steady thing about his production on “Pablito’s Way” is the relentless tempo in which he lets this album blast through your surround sound speakers. Mexican trumpets (“Pablito’s Way”), Bollywood chanting (“Megalo Maniac”) or Tim Burton soundtrack music (“Sleeping Giant)” – it doesn’t seem to bother Kurt what he’ll use next.

Although this album contains seventeen full tracks, “Pablito’s Way” doesn’t get monotonous for one single bit. Pablito – Spanish for Paul – compiled a surprising list of guest speakers for this sophomore effort. Kutmasta Kurt provided each one of their house guests with beats to match their particular style. “One Time For Your Mind” contains an inciting horn section that is perfect for Blackalicious’ motor mouth Gift of Gab. The G-Funk samples on the slow-paced gangster anthem “Top Down” fit Too $hort like a lime green macking costume. And a paranoid sounding organ couldn’t be better to accompany Kool Keith heralding their longstanding partnership on “Professional Experts.”

With “Pablito’s Way” Motion Man proves he is a true Bay Area hip-hop legend. It is a rather strong word, that shouldn’t be used lightly, but this artist deserves a lot more recognition than he is getting right now. This album has the ability to give you an ear-to-ear grin, and make you bob your head at the same time. It will probably make your teeth clatter, but will also attune your ears to a new way of music listening. Pablito’s Way.