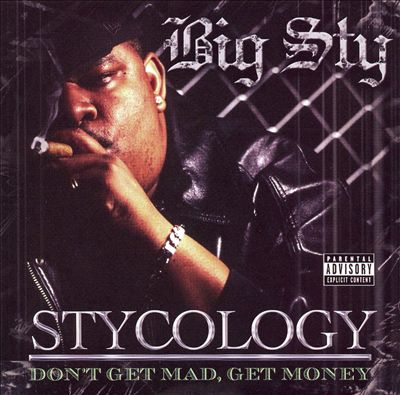 Rappers like Big Sty often catch flack for their formulaic approach and standard subject matter. Rarely are they given credit for the actual implementation of what they adopt, no matter how well they pull it off. Subtitled “Don’t Get Mad, Get Money,” “Stycology” delivers the expected hustling tales. Repping Richmond’s Southside, Big Sty has to be aware of the fact that with Virginia’s Clipse as national state representatives, he’s up against some of the most passionate street pharmacists in the rap game. It would be a losing battle if “Stycology” would only consist of songs like “Don’t Get Mad,” “That’s Me” and “Part-Time Hustla.” Instead, the rapper in his late twenties tries to come up with a complete hood pictorial, even taking it down to the Gulf Coast with the accusing “Cry For Us” in tribute of the victims of Katrina.

There are a million and one rappers that don’t realize that there’s more to writing a song than coming up with a title, a hook and three verses. If Big Sty puts his mind to it, he pens songs that not only have a topic, but also stay on topic. Take “Hood Luv,” which offers a sympathetic view of the ghetto:

“Every hood I been in got certain elements in it
You got your neighborhood freak and your delinquent tennant
You got your nosy neighbor that can’t shut her mouth
It’s like that up north and the same in the south
Little kids playin’ jack rock, cats wanna slapbox
Go around the corner and it’s the same on that block
Housewives watch _Matlock_ and soap operas
Baby mamas, they can’t stay out of drama
The old heads talk about the good old days
and what new stars the neighborhood gon’ raise
The bright chick that never got nothin’ below a B
The kid that could shoot from the top of the key when he was 3
To all my dogs, I can’t knock how you eatin’
just make sure you doin’ it for the right reasons
Speak out and look out for these little boys and girls
I’m a product of the hood and wouldn’t change it for the world”

Not to make it seem like Big Sty has a particularly philantropic personality, because his pride to be a hustler is much stronger than any shame he might feel. There’s a regretful ring to the streets-is-calling theme of “Temptations,” but since there “ain’t no such thing as a part-time hustler,” Sty justifies his decision to deal drugs the old fashioned way:

Unfortunately, Big Sty’s ego often gets in the way of more meaningful material. True to its title, “Stycology” is all about the big man. Don’t let a song title like “She So Gangsta” mislead you, even there Sty is the center of attention. To his credit, it’s a routine he’s got down pat: “Walk up in the club, they don’t pat me down / bouncers back up when my hat be down.” Clubs are catered to with several efforts, lead by the superior “U Ain’t Heard” produced by Knessesary, living proof that Timbaland and The Neptunes aren’t the only ones knocking out contagious club tracks made in VA.

While it mostly delivers East Coast hustler hop (right down to 50 Cent-like harmonizing and Big Pun-like inflections), “Stycology” also ventures deeper south with the Young Jeezy-sampling “Don’t Get Mad” and Wyshmaster’s southern spanking “Get That” featuring Commissioner Wig and Boog-N-Tha Hood. Back in Richmond, Sty intimidates local competition like only a gangsta rapper can:

“Comic book cats who never been in some beef
Yo, we hustlers, dog, we live in the street
So to me all them freestyle ciphers is worthless
If you ain’t in it for the dough, dog, then what’s your purpose?
I ain’t tryin’ to hear you flow off the top of your head
I grab a nine and blow off the top of your head
The S-t-y, respect it, nigga
This city belong to me now, accept it, nigga”

Considering the played out gunplay, Sty gets credit for more lyrical efforts, boasting at one point, “Who you know comin’ with flows this collosal? / Years from now they be tryin’ to clone my fossils / cause I spit the gospel to these hip-hop apostles.”

Somewhere Sty puts up the equation, “What do you get when you combine the mind of a hustler with the heart of a MC? / Answer is you get me.” That’s more than many other gangsters-turned-rappers are willing to say for themselves. Big Sty’s passion for rap becomes evident in compositions like the clever safe sex PSA “Can’t Live Without You,” or “The One,” where he argues his way to number one status. On “Focus” he invites female rapper Ruin to retort his money-over-bitches rhetoric. It’s no “It’s a Man’s World,” but it is a reference to an earlier, more creative era. He even stops for a simple hip-hop moment as he gives his rendition of the alphabet while DJ Wave cuts up the backbeat (“A to Z”). One of the album’s highlights is “I’m Talking 2 U,” where Steezy’s flow is inspired by the excellent track by producer Jay, a smooth tune sounding like something The Beatnuts would cook up. Coming across like an extended version of Jay-Z’s “Friend or Foe,” “I’m Talking 2 U” serves as a fair warning to opponents:

“Look, you need to beg your pardon
cause we ain’t here to bargain
You cats got fat and left everybody starvin’
We takin’ over now, no if’s, and’s or but’s about it
You wouldn’t let us in, so now we gotta cut you out it
And we consolidate it, I know you probably hate it
but you movin’ work on my block, I couldn’t tolerate it
And I was obligated to move your operation
You wouldn’t communicate it, took up any compensation
Too many complications, I’m switchin’ your line up
Try to go against us and watch where you wind up
Get your grind up, you either with us or behind us
Make your mind up, tic-tic-tic – your time’s up”

Ultimately, however, the album boils down to a handful of very strong cuts and quite a lot of filler that tends to give the impression that Sty wouldn’t touch originality with a ten-foot pole. Clocking in at 72 minutes and devoid of any skits, “Stycology” is a one-man show tempered by a variety of producers who deliver standard to slightly sub-par East Coast and Down South backdrops. With an ageless voice, an adaptable flow and eloquent expertise, Sty carries the weight well, even if he sticks to the proven sex, drugs & rap script.