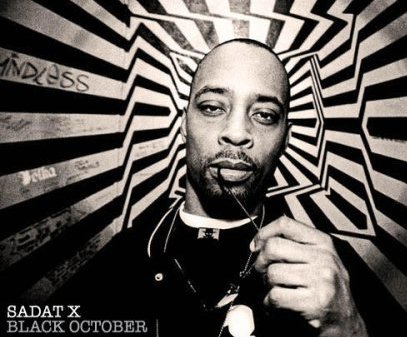 Sadat X certainly is facing one hell of a “Black October.” The title to the Brand Nubian’s latest is in no homage to Cypress Hill, and it damn sure ain’t the sequel to a relatively titled Killah Priest classic. For y’all that don’t know by now, he’s a marked man. X will spend a sobering September staring down the barrel of an eight month bid, just months since an arrest on gun charges.

Normally, I’ll toss in tidbits like that for shameless filler, or some bullshit intro. But “Black October” does not apply to the norm. Yeah, I’m sick, but what, on this fucked up earth, is more fascinating than a man sure of his fate? Short of biblical phenomena and LeBron James, I wouldn’t say too much. Doomed X may be, but he acknowledges his dilemma and runs with it. His situation truly gives the album matchless appeal, and its storied, tight recording frame adds to the dramatization. Sho’nuff, there was no time to waste Fun facts as such give the album even more character, regardless of its affect on the music whatsoever.

Sadat wastes no time in using the title track to stuff you down his moccasins. Throughout, he laments and regrets, but in enviably optimistic fashion. And although he couldn’t have forced these words if he tried, his glass-half-full mentality is tragically suspect:

“I’ma miss all my dudes
miss drinkin’ beer, eatin’ home-cooked foods
Layin’ with the body ’til noon
I’m already countin’ the days ’til next June”

X puts himself in good position for what could have been a gripping concept album, but understandably enough, he chooses not to follow through. What substitutes are fourteen tracks taking Sadat’s modest New York life into great detail. And with “Foundation” recently going 5X wood, it’s no secret that his high status among the hip-hop community is quite polar to that of his back home. I quickly discovered that dude’s everyday life ain’t too far off what my* ass goes through; he attends house parties where even he* needs to work up his swagger; he reads “Tha Post;” he questions hip-hop; and yeah, he’s still thirsty for that “Million Dolla Deal.”

When the production is in agreement with Sadat’s instantly recognizable pipes, beautiful things happen. The Asmatik crafts an elegantly simple piano number for “Eternally Yours,” where the break is as down-to-earth as X’s flows. Da Beatminerz are near peak form for “On The Come Thru;” Sadat’s splendidly gritty performance perfectly harmonizing with their faded chimes and thunderous snares; and it’s another day at the office for the adept J-Zone on “X is a Machine,” whose trademark obscurity remains absolutely cutting edge (will he EVER get the credit he deserves?). In the end, though, it fucking torments me that the best beat on the LP is a 1:09 interlude splitting up the listen. Spencer Doran composes a masterpiece of dizzying keys and nervously lingering violins, a work of art that could have easily made the cut for “Madvillainy Vol. 2.” Beautiful and out of place, it neither helps nor hinders the album.

The fact that Sadat sounds more than comfortable over the lower-tier tracks is a testament to his veteran ability and creativity as an emcee. Still, he fails to bring DJ Pawl’s techno-racket on “Who” to anything above inferior, nor can he mitigate the torture of Greg Nice’s R. Kelly samples on “My Mind.” Finally, Scott Blanco wishes he was Scott Storch on “Untraceable,” but proves that his beats can be even more annoying.

“Black October” could have been a humbling trip into Sadat’s thoughts, but his refreshing outlook makes the experience bittersweet. The good news is that it’s still a joy to hear him slighting the rest of the world (“I understand DVD sales, and how radio prevails; me and you is using different scales “), and his born-to-flow flow is as much a delight as it’s ever been. “Black October, a moment that’ll sober us all, no it’s not over at all,” Lord Jamar remarks on “Chosen Few,” but with Sadat twenty some-odd years into his career and facing another uptown, heads can only hope he keeps a pen handy behind bars.