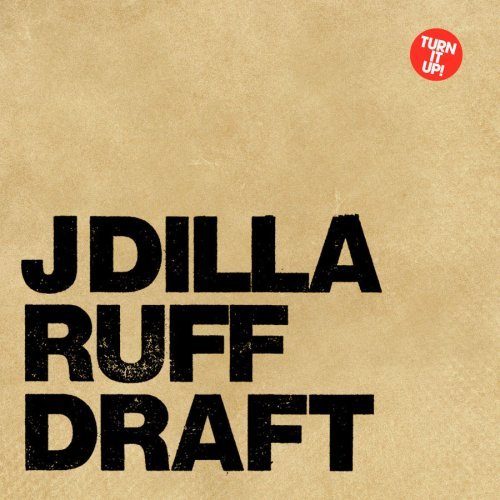 Telling the James Yancey story again would first require me to find the nearest brick wall and bash my head into it until I forgot I had told it in the first place. Therefore for those of you who are STILL not familiar with his name by this point let me summarize: beloved and highly talented producer, life tragically cut short by disease. If that’s not enough for you either check out the ever-evolving (and often unreliable) previous reviews here on the website. Got it? Good. Let’s move on.

“Ruff Draft” is not as rough as the name would imply. This is in fact a polished statement of musical intentions, albiet a very short and fleeting one reminiscent of that old saying about beer – you don’t buy it YOU RENT. Debate the truth of that if you like, but for argument’s sake let’s say that “Ruff Draft” represents the equivalent of a Guinness or a Young’s Chocolate Stout; in other words if you’re only going to enjoy it for a short time before it leaves you then you might as well get your money’s worth. Dilla opens this EP stating it’s “real live shit, bounce in your whip […] sound like it’s straight from the muh’fuckin cassette” and when listening to it it’s easy to believe that’s how he envisioned the project; a personal mixtape with fully professional studio beats and rhymes. It’s worth noting then that originally “Ruff Draft” was only pressed to vinyl in limited quantities, and I have yet to see a whip tricked out with a stable 1200 turntable that wouldn’t skip when you bend the block. (Undoubtedly somebody will e-mail me a link to one five minutes after I post the review.) The song “Reckless Driving” epitomizes this feel – Dilla exhorts “real niggaz with the beat in the ride” to “turn the bass up another notch” and the song is a straight up unapologetic banger that’s over all too quickly before slipping into the hypnotic “Nothing Like This.”

This is a very personal Dilla album, arriving after Slum Village fell apart and coming at a time when hip-hop’s anti-backpacker revolt had set their sights on Jay Dee fans as 12th level intellect nerds. Dilla’s response intentionally or otherwise was an album which thumps and funks and bumps; trying to resist head-nodding to tracks like “The $” is an exercise in futility. Dilla attacks the track lyrically, defying haters with lines like “I got a muh’fuckin right to shine nigga, I’ve paid my dues I’ve earned this cake I abuse […] I know how to handle my B-I and I do.” Say WORD. As is typical for a Dilla beat tape or mix even the “Interlude” tracks shine, but you’ll fall in love with the beautifully rugged “Make ‘Em NV” with it’s M.O.P. samples and “shut the FUCK UP” attitude, the hippie-love inspired “Crushin’ (Yeeeeeeah!)” and the technological keyboard swing of “Take Notice” featuring Guilty Simpson, the only “featured” artist to be found anywhere on this short release.

For the 200X-to-infinity reissue Stones Throw has digitally remastered Dilla’s “Ruff Draft,” added bonus tracks and included a bonus disc instrumental version that gives you a whole new chance to appreciate the brilliance of Dilla’s beats stripped of their rhymes. That brilliance should be carefully quantified for the record though, because as great as “Ruff Draft” is there are times you still get the feeling Dilla took the title too seriously and released an EP of songs he didn’t feel like finishing. A great Dilla track doesn’t have to be more than three minutes and “Donuts” proved that, but these short snippets are so tasty you still can’t help wishing he had cooked a full meal instead of a few tasty bites. Still all things considered and given the obscurity of the original release it’s hard to knock “Ruff Drafts” for what it is, especially given the bonus disc. Cop this one.