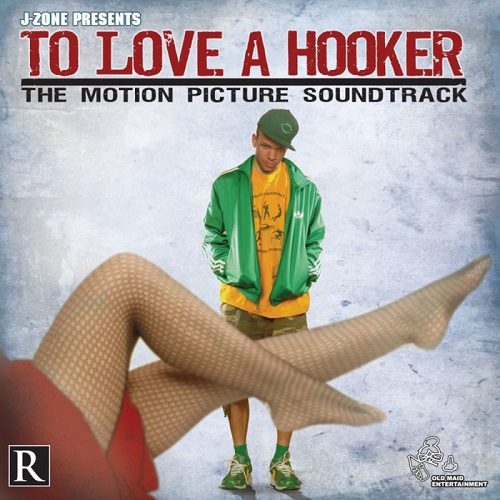 J-Zone :: To Love a Hooker – The Motion Picture Soundtrack

Everybody HOLD UP before you go running off to the Bo$$ Hog Barbarian that believes Pimps Don’t Pay Taxes. He’s a little bit loco en la cabeza and that’s how hip-hop likes him, busting out fat beats with totally unapologetic rhymes.

These days “soundtrack” has come to mean “music inspired by the motion picture, which probably wasn’t used in it, that was written by a bunch of D-list rappers a label gave deals to.” Zone is taking the definition back even though this is a fictional movie that doesn’t exist. “To Love a Hooker” is the true SOUNDTRACK to this non-existant motion picture, meaning the actual music used throughout the film from the opening sequence to the closing credits. Does it matter there’s no movie? HELL NO. Zone explains it like this: “Fake movie clips, a cast of characters, scene descriptions in the liner notes, some crazy beats, an easy to follow storyline about a dude’s wife leaving him and him falling for a hooker/stripper… it’s all there except the lyrics!!” For Zone it’s a chance to stretch his imagination and bust out beats while letting the listener fill in the blanks to this movie of the mind.

After a couple of introductory set-up scenes, the album truly gets underway with “Theme to Love a Hooker.” It’s the kind of Zone track that’s become his trademark – sleazy funk, heavy bass, and hilarious scratches like “pussy for a price.” As the album progresses there are a series of short “Film Clip” breaks which keep the concept moving along and set up the instrumentals that follow. Even without the motion picture premise, these instrumentals would be fresher than a virgin’s pussy. “Let it Go” is a throwback to 1960’s rock’n’roll and soul brought up to a 21st century hip-hop beat. “Cyberluv” on the other hand is AOL from hell, a song which makes you feel like you’ve one greasy palm on the mouse and another in places best not discussed. It almost seems wrong to not hear Zone rapping on this beat, coming off with a sleazy rap that starts “I met this hoe in a public chatroom.” You won’t get it though, so fill in the blanks yourself.

The film moves on and continues to find inspiration in the macks of old and new, simultaneously weaving the two together on the Too $hort sampling “Players Club (Part 1)” and then softening things up on the silky samples of “Players Club (Part 2).” Zone has no problem going from romantic to barbaric in a heartbeat as he immediately follows up with the crass “Strip!” Even without the raps it’s not hard to get into this story and imagine Zone as the hapless protagonist chasing after his lady of ill repute as she drags him down a road of sex and degradation. The film can go from exotic and unusual to hardcore and dirty, extremes exemplified by “Lapdance” and “Raid!” Throughout it all though Zone’s production skills and sense of timing remains intact, knowing just what beats to layer together and which samples to use when.

There are plenty of beats on “To Love a Hooker” that J-Zone fans may want him to revive at a later date and considering making a rap out of. The oral sex ode “Dome,” the hilariously vulgar “Prostitute,” and the soulfully ironic “Beach Yo Ass” among many others would make for the kind of classic verbal pimp slaps his fans have grown to love. Even without busting a single rhyme on this album though Zone has created a work of art that’s easy to appreciate and hard to deny. Some ambitious fools may actually bust their own rhymes to it, something which Zone actually encourages people to do, but after hearing “To Love a Hooker” from start to finish it seems more appropriate to let it stand alone. The movie may not actually exist but this is one hell of a soundtrack to it.