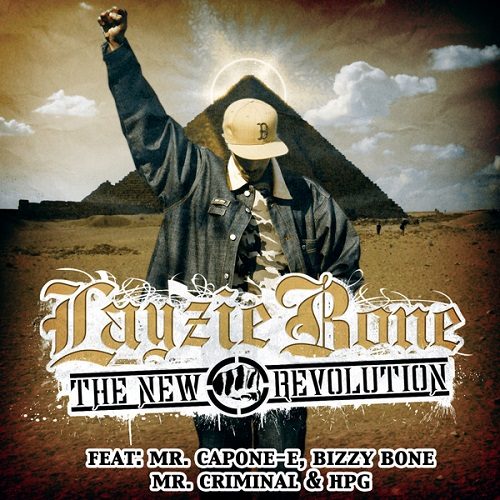 One is hard pressed to say anything Layzie Bone records in 2006 is “new” or “revolutionary.” That’s not intended as a knock in any way. Bone Thugs-N-Harmony were new and revolutionary back in 1993-94, and their innovative style of musical and fast flows mixed with Cleveland bravado shot them straight up the charts and sold millions of albums along the way. It was not nearly as new or innovative when all of the group members branched out into solo albums, a precedent which had already been established and proven successful by the Wu-Tang Clan. Nor could it be called new or revolutionary that success as soloists almost became the group’s undoing, as they found it increasingly hard to come together and collaborate on new releases. While a new group album is anticipated for release this month (now as a trio minus ousted member Bizzy Bone) it’s still solo albums that come out far more often than group releases, and “The New Revolution” is another in a long line of Bone-related projects – some more successful than others.

The artist also known as L-Burna has on this album joined with the Hi Power family, the implictions of which may not be immediately obvious looking at the exterior without removing the shrinkwrap. Insider the liner notes it couldn’t be more clear – a lot of the tracks are produced by Mr. Criminal, and Mr. Capone-E acts as the executive producer. Not surprisingly both men are featured on two tracks – the latter on “Say Lady” and “These Hi Power Soldiers” and the former on “Midwest-Westcoast Connection” and “Wanted to be a Soldier.” The entire album brings the realization together, as you’ll notice a change in the sound that’s more akin to a Lil’ Rob or Baby Bash CD than you’re used to on previous Bone Thugs releases. Still the hispanic influence does actually add a little bit of “New Revolution” to Layzie’s sound, even when rapping about familiar topics on songs like “For My Weed Heads”:

“Man I can’t believe it, I’m tweeded
Where the Grey Goose nigga I’m fried
Decided that night to drive
Fucked around and caught a DUI
Too much intoxication
Fucked up and I’m on probation
It’s a jacked up situation
And the mafio is who I’m facin
Gotta take piss test after piss test
I’m so stressed that I might break
Another mistake I can’t take
Can’t violate my probate
In jail is no good
But smoke free I can’t see
I’ma smoke ’til the day I D-I-E
That’s just keepin it real about me”

To be honest it might be cliched and recycled as hell but thanks to Layzie’s relaxed sing-song delivery it still comes off pretty smooth. The same can be said of tracks like the bombastic “From the 99,” the soft and breezy fallen homeboy ode “For the Thugs That’s Gone,” the unapologetic and catchy smoke-out anthem “I Get Higher” where Lazyie proudly proclaims “I’m inspired by the weed in my life” in the chorus or the Bone unity track “Streets” where Layzie does a track with Bizzy despite his current ouster from the group as a whole. This album as a whole is not likely to spark “The New Revolution” that the title proclaims but it’s also not likely to offend die-hard Bone Thugs or Layzie Bone fans who can’t get enough of their shit no matter how hard it may be to get. The appeal however may be limited solely to that group given his new entourage’s limited marketing muscle outside of latino hip-hop markets, but given that the hispanic population is the fastest growing in the United States that may not hurt him at all. Who knows – his next power move may be to record a theme song for Mistico or Dr. Wagner Jr – now that WOULD be a revoluciÃ³n~!