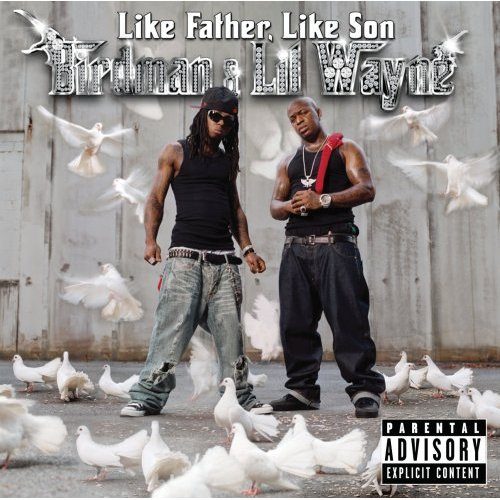 The opening “Loyalty” skit of “Like Father, Like Son” is a weird combination. The musical backdrop is an uncredited reinvention of the background music from the “Scarface” film, the music usually heard when Tony Montana is about to flip out and shoot somebody. The vocals on the skit don’t sound like Tony Montana though; the vocals are provided by somebody named Thomas Marasciullo doing what sounds like a scene from “Godfather” or “The Sopranos.” In a way yes it does make sense given they’re all fictional criminal enterprises, but it’s like hearing Schoolly D rap “P.S.K.” over a DJ Premier beat in that it could be dope and it would still be WRONG.

There’s also something a little wrong with Baby/Birdman and Lil Wayne/Weezy referring to their relationship as “Like Father, Like Son.” It’s not too many fathers who own their son’s record label; furthermore, as of the writing of this review I was not aware that Bryan Williams had ever adopted Dwayne Carter in the first place. There’s certainly no biological relationship between Baby and Wayne, and it bears repeating that it’s hard to see Weezy calling Birdman “dad” when his “father” could shred his record contract and kick him to the curb any time he feels like it. Nevertheless even if this relationship is a fiction created solely for a conceptual record, it does at times click on this CD. Such is the case on the TMIX produced lead single “Stuntin’ Like My Daddy”:

Wayne: “Bitch I’m paid, that’s all I gotta say
Cant see you lil’ niggaz, the money in the way
And I’m, I’m sittin high, a gangsta ride blades
And if you ain’t gone ride fly than you might as well hate
Shit, I gotta eat yeah even though I ate
No it ain’t my birthday but I got my name on that cake
Shit – believe that, and if ya mans wanna play
I’ma fuck around and put that boy brains on his gate”

Birdman: “Born stuntin, uptown hunter
3rd war G nigga been about money
Ice chunky, Birdman red monkeys
White tees on them chromed out 11 hundreds
You know we shine every summer
We grind every summer, and this is how we spend money
You see them Bentleys and them Lambs’
Them ounces and them grams, bitch we was born hustlin”

They certainly have the same approach when it comes to flossing wealth and flaunting status, except of course Birdman can more easily afford to as the CEO. You think they split the profits on this album 50/50? Think again, rappers get FUCKED in this game. Your label gets 90, you get 10, and then the label takes the expenses of promoting the record out of YOUR 10. Let’s see Wayne stunt like his “daddy” off what’s left of his ten percent. Nevertheless I digress, there’s still a lot of worthwhile music to listen to on “Like Father, Like Son” despite how overall superficial and vapidly materialistic the topic matter is. The usual guests you’d expect on a big new gangsta rap album are all here, and they’re all paired up on hit making beats. Rick Ross gets his own floss on for the smooth “Know What I’m Doin'” and you know Fat Joe is “About All That” when he grips the microphone. What do these songs have in common with the lead single? TMIX from Crime Family. The producer shows himself an able substitute for the pounding Mannie Fresh beats that used to be a Cash Money trademark. Not BETTER than Mannie Fresh mind you, just competent to fill that role. Other dope tracks include the heavy DJ Nasty and L.V.M. pounding bass of “Cali Dro” featuring Daz & Kurupt, Scott Storch flipping up “You Ain’t Know” and Jim Jonsin jammin’ Jodeci samples to prove Birdman & Wayne roll on “Leather So Soft.”

You might be wondering what the long-term value of “Like Father, Like Son” is. Like the claimed relationship between these two rap artists, it’s only good as long as the money’s good. If Wayne felt shorted on his checks he’d bounce like everybody else from the Hot Boys did a while ago, so Carter is clearly happy with what “daddy” is giving him. You probably will be too if you’re a fan of either man individually, although hearing them in this setting without any of the rest of the “family” like Juvenile, B.G., Turk or Mannie Fresh just feels odd. It’s not so obvious that there’s something not right when they’re rapping seperately but when they’re stuntin’ together Wayne is about as much Birdman Jr. as Rey Mysterio is Rey Mysterio Jr., although at least in Mysterio’s case the original was his uncle so there’s SOME family tie there. There’s none on “Like Father, Like Son” except in their own minds, but if you want to go along for the ride it’s not the worst record you’ll buy in 2006. In fact at times it’s quite good, just incredibly contrived and unnatural in the process.