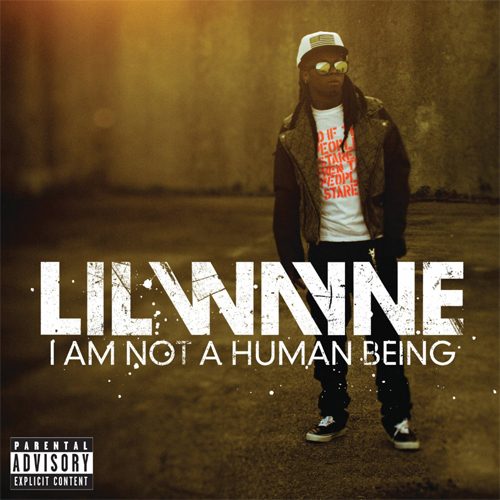 Lil Wayne :: I Am Not a Human Being

Lil Wayne is still in prison at the time of writing. Before he went in, he recorded a few tracks for an interim album to be dropped on his birthday, and the result is the strangely enjoyable “I Am Not a Human Being.” It is neither an album nor a mixtape: in fact, it isn’t even like a “Lost Tapes.” It is just a collection of original (legally, that is) songs, a few guest spots, and Wayne getting back to rapping after his largely unsuccessful “Rebirth” rock venture. It is one of the most mind-numbingly stupid rap albums in recent memory. It is also an awful lot of fun to listen to.

This one can be marked as a “gift in kind” to Weezy’s most devoted followers â€“ they will love it, having been used to such a constant barrage of fresh/hijacked material from the Dreaded One. His profile has been bizarrely high in 2010, despite having been locked up for most of it, mainly thanks to his Pac-esque work ethic, and the wonders of green screen. His Young Money cohorts have also done him proud, with Drake going platinum (despite a somewhat average debut album), and Nicki Minaj progressing into an artist that could possibly end up being a whole lot more popular than Carter himself. Not to mention the only guest spot on the biggest album of the year (Eminem’s “Recovery”).

This doesn’t necessarily mean that Lil Wayne is on top form here, far from it. That would imply that he has put some kind of thought or creativity into things such as “concept” or “subject matter.” Don’t be silly, dear Reader. He has 3 targets: sex, violence and boasting. Yes, those three vital tenets of Hip Hop. Once you resign yourself to these facts, you can accept the lack of ambition and just enjoy how ridiculous, funny and stupid his talent for rhyming about pointless things is. “Be good, or be good at it” as he would say.

Unfortunately, his spell-binding raps with free-flowing verses that made complete/zero sense, often at the same time, are rarely evident here. Gone are the comparisons with Andre 3K and, dare I say it, Ghostface Killah â€“ instead we find impressive couplets. “Impressive couplets” â€“ that’s hardly concrete evidence of being the “Best Rapper Alive” but it has gotten to the stage where he has spit a funny couplet, then tried to outdo it two lines later, as if he’s already forgotten it. There is little connection between the abstract ideas that proved so compelling on his most well-received mixtapes, and “Tha Carter III.” He claims to have returned to physically writing down rhymes whilst in prison, and it may not be such a bad idea to retrain his discipline, to sharpen his sword.

“Human Being” is, advisably, a short collection of songs, and ropes in other Young Money acts like Drake, Nicki Minaj and Jay Sean. Drake, in particular, pops up a lot, and the chemistry between him and Wayne is surprisingly good. They double team in a strangely comfortable yin and yang act, swapping roles and poking fun at everything â€“ arguably, these collaborations are better than the big “official” one of Drake’s own debut album, “Miss Me.” Wayne is a croaky, deeply perverted loose cannon, whilst Drake is soft, airy, laser-guided clit-seeking missile. It reminds me of listening to Big and Jig on “Brooklyn’s Finest” â€“ not in terms of quality, but contrast.

There also appear to be various off-cuts from other projects. The title track has a partial guitar riff, so it would be safe to assume it didn’t make “Rebirth” for some reason (despite it being better than most of that album); “With You” sounds firmly like a Drake song, as does the excellent “I’m Single” (complete with hilarious video). Nicki Minaj is, unfortunately, solely on hook duties on “What’s Wrong With Them” but luckily, along with the rest of the album, there is strict quality control on offer. There are no real weaknesses on display â€“ although one could conversely argue, of course, that Carter doesn’t show any of his most thrilling strengths, either. Regardless of everything, we should judge the album on the point of its existence. It is here to remind and reward fans of Lil Wayne the Rapper that his career and spirit is alive and kicking. It also probably serves to bookend a period of his life that is almost over, allowing him to freshly plan for “Tha Carter IV” â€“ an album that you can expect to be markedly better than this, even if “Human Being” is an enjoyable dash of mindless entertainment.

Lil Wayne :: I Am Not a Human Being
6Overall Score
Music6
Lyrics6