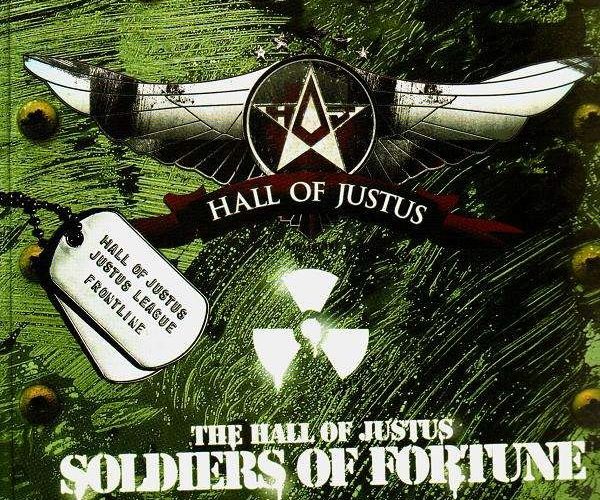 Hall of Justus :: Soldiers of Fortune

According to its website, the Hall of Justus is more than a label, but a multimedia group specializing in production, artist development/management, and distribution. At its helm is Big Dho, the CEO and visionary who looks to deflect pigeon-holing his artists; rather, he seeks to develop them beyond the category of the local act and help them achieve their full potential. If his words are not enough, check his record: his first role came as manager of Little Brother â€“ underground successes whose albums, along with their several side-projects, have garnered high praise from critics and fans for being “outside the box” hip-hop. In addition, other HoJ members such as the Away Team (Sean Boog and Khrysis), L.E.G.A.C.Y., and Chaundon have all released successful albums, adding depth to an already strong foundation. Thus, with additional assistance from Joe Scudda, newcomers Skyzoo and Jozee Mo, and production support from 9th Wonder, Khrysis (who supplies the bulk of the beats), Nottz, Erv, Fatin, Majik, Black Jeruz, Evidence, Vandalism, and Buckwild, Big Dho’s HoJ looks to entrench its brand of eclectic hip-hop breaks and personalities in a modern music industry of carbon copies and re-tried acts. However, does the album hold up?

The ultimate answer is “yes,” but with some exceptions. First, let me clarify that 9th Wonder takes a backseat on this project. While doing so could have sacrificed the overall sound and appeal of the album, the other producers undoubtedly pick up the slack and offer a plethora of diverse sounds and rhythms to keep the listener active and interested. For instance, the introductory tune “Basic” is a worthy opener that has Erv banging a slow drum and bass line, accompanied by omnipresent chimes that add a slick backdrop to the braggadocio raps spouted by Big Pooh and L.E.G.A.C.Y. The minimalist approach is more than effective and easily transitions to the nostalgic, 80s-feel synthesizer/drum snap combination on the 9th-produced “Try Me Again,” where Pooh quips: “Somebody, betta get this dude a box of depends/ I don’t know when this period ends â€“ probably never.” The following two tracks, “Grind Season” and “S-K-Y,” feature lesser known and upcoming Justus League members lending their vocals to booming horns and organs, but give way to Little Brother’s “Life of the Party,” a Nottz produced gem that grows on the listener with every go-around. Phonte once again shows his lyrical growth, spreading more of that honest, at times self-deprecating, witticism that has made him a rarity in the game: “People stop and stare, â€˜Look what them boys got’/ We can’t afford Cris’, frontin’ like we boycott.”

The album again reaches for that old school feel, this time with Khrysis on the boards bumping out some hard pings on top of an old vocal sample for L.E.G.A.C.Y. to expound more of that “better-than-you” raps. Evidence then steps in for a quick change in tempo meshing his guitar and piano loops with Joe Scudda’s easy flow on “Secret.” However, it’s Little Brother’s stage once more when they drop some more of that classic ish on the Buckwild-assisted “Back At It.” Here, the beat features an ever-changing slow piano and harmonica, imposing visions of the duo rapping in some old jazz bar while Cormega adds a comparable verse that make this easily one of the stronger joints on the album. Ultimately, though, most of the HoJ crew “come together like Voltron” to embolden the Khrysis-produced, already musically amped, “Rock Co. Kane Flow”-esque beat that is the banger “Tour of Duty.” Each soldier marches in and provides their best for this song that will get your head bouncing from start to end, allowing Tay to close it out: “A true Capricorn, yeah he on that loner shit/ But they couldn’t stop Tay/ ak-ay the one nigga you don’t want it wit’!” I cannot emphasize enough the gully attitude oozing off the track; my only complaint is that the crew did not decide to simply end it off on this note â€“ something De La Soul did effectively on their last album.

Nonetheless, the most obvious positive of this album is also its worst negative: Phonte is the illest (point-blank, peri-od) and there is no one in the HoJ camp that is going to supplant his talent. But, as stated previously, there is not any rapper out there that has Tay’s style and can compare; yet, the gap between him and his cohorts in the JL is very wide, reflecting at once both his own escalating skills and the lack of lyrical heat from his partners. Such weaknesses are most apparent when we hear Phonte and even Big Pooh touch on subjects so honest and with frankness unfound elsewhere, while other HoJ members continuously dish out battle raps and brags (see “1ne” and “Secret” featuring Chaundon and Joe Scudda, respectively, for examples). Unfortunately, no song on “Soldiers of Fortune” steps out for a full-length study of something other than who the best rapper is.

This is truly disappointing for while the lyrical complexity might not be there, each rapper in HoJ seems to have a distinct personality and genuine charisma that is able, for the most part, to cover up their somewhat lacking mic skills. Each MC is easily identifiable, be it style or flow, giving the album increased value for its diversity (not in content, but in flavour) and making for an enjoyable listen throughout. And combined with Khrysis’ increasingly enhanced production skills, clearly demonstrated on this album, it seems that Big Dho is apt to head out more success this year and more to come. With “Soldiers of Fortune,” the Hall of Justus will hopefully be a wider-known group of surprisingly good artists (not just those named Little Brother), as they can add this successful label effort to that short-list of similar compilations.