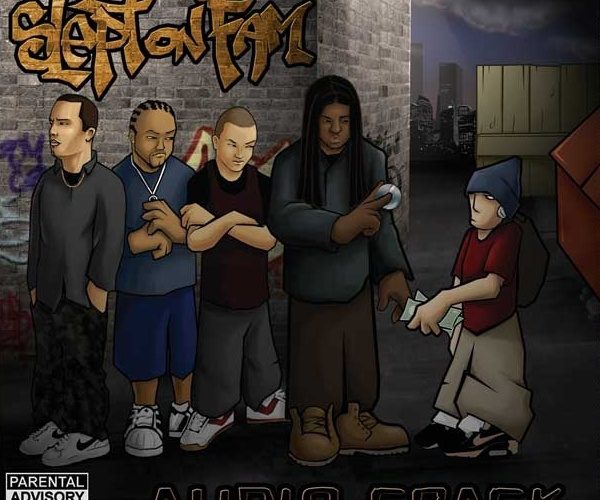 The concept might be too simple: Slept On Fam cooked up some highly addictive “Audio Crack” (hey – not crack music), a dosage intended to send fiends galloping back from the ‘jects to the ‘burbs. As a whole, it is an attempt to compliment producer Configa and his splendiferous sonic scenery. Surely, this isn’t a bad thing; Pete Rock has made a living shaving tracks for emcees that probably couldn’t battle your grandma. But where PR’s beats have made the show for themselves since 1993, Con’s emcees go to war with him.

What makes Configa so good? Really, anything that ever made Premier or Large Pro so good. Don’t take it as direct comparison, but when he’s at peak form, the sampling is superb – whether it be the indulgent disco/funk cut and paste on “That 70’s Joint” or descending xylophone of “Beginning to End.” His cuts during hooks are fitting, and the drum patterns are precise, hard, and oh so dusty. Blending seamlessly with his samples, Configa’s percussion serves a purpose beyond keeping beat. Of course, none of this would matter if the verses fell flat, and thankfully they do anything but. Arsenal, Wargasms and C-Gully (think an overly caffeinated Jadakiss) can be hit-or-miss with their battle rhymes, but impress on several verses, while their phlegm-on-the-street styles all compliment each other.

Even on a weak concept like that of “Fight Club,” the emcees’ fervor is plenty enough to carry the track. It sloppily ping-pongs from the literal sense to a lyrical one, and the hook is straight ass, but every line is spat like a steamroller. “Big Nigga Anthem” is simple but appreciable slapstick, the applicable members (C-Gully and Wargasms) trading verses glorifying their waist size. Even on “Say It Ain’t True,” when they look right into your eyes and lie (“we’re the best ever doing it”), and are at their disturbingly most pompous, at least it isn’t in wasting one of Configa’s selections.

“Green Power” is a classically approached take on cash, easily but unexpectedly holding attention (“for money in my pockets, I’ll bootleg my own group’s CD so I ain’t gotta share the profit”). Configa gets a pass even adopting the sample AND title from Quasimoto’s version, seeing that he tops it. “Lot of Love Lost” is Blackalicious’ “Deception” slightly flipped, with guest Estee Nack playing the starry-eyed hopeful: “they say I’m overzealous – I don’t even know the meaning All I know is I hate the feeling waking up from dreaming.” The closer “Beginning to End” might house misplaced angst, but a line like “what an emcee gotta do, get shot to blow?” is an undeniably fair assessment on success.

“Audio Crack” starts strong (the title track in particular), fades a lil,’ but ultimately goes out harder than it came, beats and rhymes coming full circle for a very satisfying close. It isn’t that the cream filling isn’t tasty; Arsenal has a tight 2:00 solo shot, Chino XL drops by to (continue to) reinvent the punch line, and Configa elegantly intertwines reggae and rap on “From the Bottom;” it’s just that the breading on either side is sinfully delicious. My biggest grudge against “Audio Crack” might be that the jewel case won’t stay shut. Still, there’s plenty of room to improve. Scrap seven or eight sleepers and “Audio Crack” might be one of the strongest albums for 2006. As is, it’s a (mostly) cohesive affair with great production. Can’t complain about that.