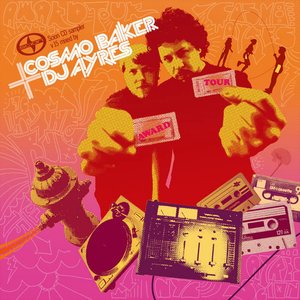 Even the most consistent hermit hip-hop fanatic wants to get his freak on in the club every now and then. Club tracks dynamics work through through a whole different set of rules than headphone enjoyment, so even those favourite MC’s who pack more lyrical firepower than Israel’s defense arsenal won’t get played most of the time. If it ain’t banging, it ain’t playing. With the fifteenth installment of Scion’s CD Sampler, Cosmo Baker & DJ Ayres prove they have picked up on those simple rules, and do some vinyl victory laps on “Award Tour.”

The two DJ’s, better known under their self-chosen alias The Rub, have been hyping up for over a decade. Philadelphia resident Cosmo Baker worked together with the likes of King Britt and Philly’s musical godfathers The Roots. DJ Ayres, according to Scion’s press release, put together more than fifty mixtapes in ten years. An average of five a year won’t impress Clinton Sparks, but Ayres is a respected and familiar face in the New York underground scene.

With the exception of Memphis Bleek and Ghostface Killah, The Rub have chosen obscure acts with a role on the outskirts of the hip-hop realm. Sometimes that outsider position is geographical – Kano is British and TTC are French – but other times because they have roots in other musical genres. Some tracks on “Award Tour” seem out of place, like the slick neo-soul ballad “Melt You Down” by Shirley Lites and the contribution by the 100% indie rock band Bloc Party, who have the honour of doing the final act on the mix CD with “She’s Hearing Voices.”

The most surprising conclusion about this chaotic collection of songs is the solid impression “Award Tour” evokes. The mix starts off rather traditionally with acts like Little Brother and Ghostface Killah, but moves over rapidly to more exotic tunes like British phenomenons The Streets and Sway. Especially Sway’s fast-paced flow over grinding, gnashing electronic madness is inciting. Like halftime at an NBA match, The Rub provides some breathing space with slick soul and latin rhythms. If you’re at the right party, at least half of the dancefloor is filled with feminine extravagance. By playing Nick Chacona and Chromea, Ayres and Cosmo Baker show they definitely haven’t forgotten about the ladies.

After the intermission, which gives the male audience an opportunity to make a bathroom break or get some new drinks, The Rub revs up by mixing in some hyphy (Kudu, Trackademicks), and progressive underground hip-hop (Spank Rock, Kano, Radiol*t). The emphasis is on uptempo electronics with maddening kicks, snares, bleeps and clicks. It’s like listening to the legendary Kraftwerk after they got windmilled in the head by an entire b-boy crew.

When your material is being played by club DJ’s with an ear to the scene, chances are you might blow up in the next couple of months. At least a couple of tracks on this mix CD have great potential of becoming dancefloor favourites, in spite of their obscurity. “Award Tour” is the perfect warm-up soundtrack for cars full of people on their way to that dancefloor. Sometimes The Rub overstep themselves a bit with their constant boundary crossing, but in the end it’s the result that counts. If anyone has some free tickets to spare, you know where to send them.