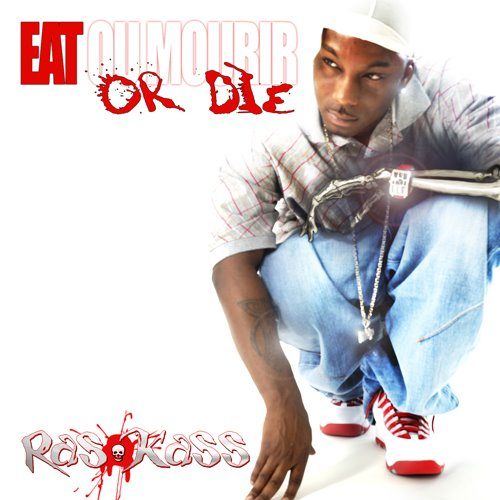 I’ve been waiting for a new Ras Kass album for years, and I’m still waiting. Despite “Eat Or Die” being billed as a proper album by every website I could find, it’s nothing more than a glorified mixtape. I should have been skeptical when the site I bought this at listed it as an Australian import, but I figured more and more rappers are finding overseas companies more accommodating both financially and artistically. When I finally received the CD along with Razzy’s other recent mixtapes I was a bit disappointed. To be clear, Ras Kass is in top form throughout, showcasing his status as the West Coast’s top lyricist. But the CD itself has a disjointed feel, more like a “best of” Ras Kass post incarceration than a cohesive album. Regardless, I’m just happy to ingest some new material from the man proved you could be gangsta and intellectual and still be successful.

Now the “album” starts out a horrible mess as the intro sounds like a high school student’s first experiment with Cool Edit. It starts out with some sound byte from a movie about drugs, and then Nicolas Cage’s dialogue in “Lord of War” is included. Half way through that the beat for Shyne’s “More or Less” is dropped and then some woman comes on talking about hoeing and how much she appreciates her pimp. WTF?!?! Whatever message Razzy might have been trying to convey is best saved for his lyrics. “Mange ou Mourir” is essentially a freestyle over the aforementioned Shyne beat and represents the worst part of this “album.” Ras Kass spits his usual venom, but one would expect more than mixtape freestyles on a proper album. The problem continues on “The Realness Freestyle,” but at least here it’s clear what we are given. “Whip It (Street Fame)” uses the beat from Rick Ross’ latest hit but in this case gives it an upgrade as Trae stops by to drop a verse. “Capital P Remix” also falls under the questionable category as one has to wonder what Ras Kass has to say about Prodigy. “Playboy” featuring Lloyd Banks also leaves you scratching your head as it sounds nothing like the original, including on Banks’ debut, or the second installment from “Rotten Apple.”

With all the complaints it’s pretty clear that this “album” suffers from a bit of deceptive advertising, guaranteeing that most listeners will be disappointed, at least initially. But once you get past that you’re treated to the usual ferocious rapping we’ve come to expect from Ras Kass. “Concrete Jungle” brings back memories of “Nature of the Threat” from “Soul On Ice” as Ras drops serious knowledge once more:

“A child dies in Africa every 3 seconds
Every sixteen bars, a rapper fry on my Wesson
Attached to a Smith, that’s a big 4-fifth
Animal planet, who the most extreme?
It’s a concrete jungle, we supposed to swing
And the native’s getting restless, no dope to sling
I mean, every other day got sirens flashing ya
And I know what you thinking: “Get the fuck back to Africa”
Looking like I got a bone in my nose
I be boning white girls, got chrome on my toes
I go to jail, niggas yell “Free me”
And these UBN niggas is speaking Swahili
Yeah, we be beating on drums, making boys in the zone
And Spanish speaking niggas call it reggaeton
Fuck Tarzan, I’ma act up now
I got a semi-auto spear, take a black hawk down”

Ras Kass shows he hasn’t lost a step as a battle rapper either as he trades verses with newcomer Joell Ortiz on “Better:”

What more is there to say about “Eat or Die?” Had this delivered the actual album it promised more could be said about the whole product. Instead, what you get is a mixtape that chronicles the best of what Ras Kass has been up to since his release from prison.

Ras Kass has always been a consistent rapper in the sense that he can always deliver dope verses. Where he has failed is in delivering dope albums. Early in his career he suffered from poor beat selections. Later he couldn’t effectively match his dope verses with dope hooks. Today he still has the dope verses, but in this case the overall product has no focus. I still prefer Razzy over most emcees since one of his verses tends to be better than most rappers whole songs, but once again I’m left craving an entire meal rather than this collection of varied snacks. If for some unimaginable reason you still haven’t peeped Ras Kass, this is as good a place as any. If you were looking for that new album, keep looking but still don’t pass up on Ras Kass’ full serving of lyrical dope.