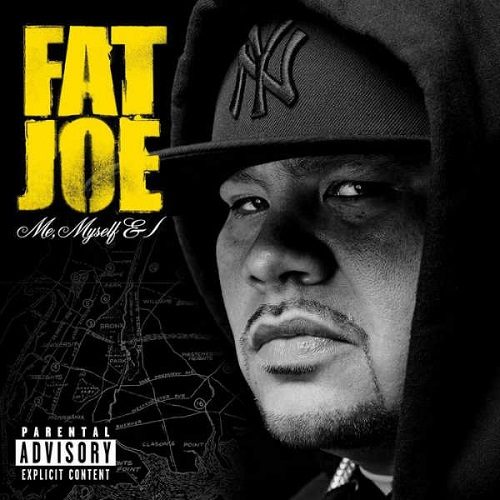 After coming with fire last year on “All or Nothing,” Fat Joe’s first solo album in over three years, it’s not at all surprising that he would drop a new joint in 2006 and try to keep the flame lit. What is surprising though is two things – the utter lack of publicity for “Me, Myself & I” and the title of the album itself. Long-time rap listeners and hip-hop history buffs might think Joe was paying homage to De La Soul, but the trippy musical stylings of “3 Feet High and Rising” are about as far removed from the drug-slingin’ raps of the self-described “Joey Crack” as you could possibly get. Case in point – the Lil Wayne duet “Make it Rain” which serves as this album’s first single:

“Crack, Crack, Crack, Crack, Crack… you hear the echo
Man I seen the best go, cause he ain’t have that metal
I’m a hustler’s hustler, a pusher’s pusher
You a buster a customer, I get you some cook-up
Yeah Crack is a chemist, I pack an 11
I’m mackin the 7, I clap at your residence
I seen you in N.Y., I’ll send you an invite
You gon’ need you a pass, that’s the code that we live by”

A word to the technologically saavy – the Best Buy release of this CD (and possibly others) comes with a download code to get the original version of “Make it Rain” not included on the disc proper. That’s fine in theory, but in reality getting the song to play once you download it is damn hard because (1.) you aren’t allowed to import it into iTunes and (2.) you have to “acquire a license” for it, most likely meaning you have to upgrade your Windows Media Player first. That’s a hell of a lot of work just to listen to one bonus track, and it’s ESPECIALLY irritating when you go to all that trouble and it STILL won’t play right the first time you try it. Moving on! As usual Fat Joe has no trouble lining up an array of hot producers and guests to appear on his project. DJ Khaled slows it down for some heavy single-note blaring trumpets on “The Profit,” which coincidentally also features Lil Wayne as a guest. Nu Jerzey Devil opts for an old school R&B funk on “Breathe and Stop” featuring the Game. And of course what East coast hip-hop album is complete these days without at least one joint from the Tuff Jew himself Scott Storch? “Think About It” obliges:

“New York – yeah we G’d up
Act up, clap the back of your knees up
Packin a mac in the back of the Beemer
Taxin you cats and you ask for the ease up
I wanna rock now, ka-plow get shot down
I know – you gon’ hire some cops now
Coca, sundown to sun up
Cali cartel, used to be a runner
D-boy, stamp bricks with smiley faces
Show you how to turn that pad into a hundred acres”

With all of these factors in place “Me, Myself & I” seems poised to be another successful album for Fat Joe, as he certainly won’t have any trouble cracking the music video outlets and FM radio formats with cleaned up edits, nor satellite radio and mixtapes with the explicit ones. Despite that “Me, Myself & I” is remarkably hollow and unfulfilling. The lyrical subject matter from the last release to this one is largely the same, except this time Fat Joe seems to have lost the fiery passion that made what could have otherwise been banal material more palateable. As you go through the 12 tracks of this CD you get the feeling that Joe is simply going through the motions, painting by the numbers, inserting generic drug rap A into hip-hop formula B to create song C. One would almost suspect Joe is heavily medicated on some sort of anti-depressants, because he sounds about as enthusiastic as Group Home would sippin’ on syrup. Fat Joe minus the passionate flow is in fact the “Joey Crack” persona he has become so infatuated with, and not in a good way.

Fat Joe’s storytelling narratives used to transcend the crack slinging rap game with hip-hop style and panache, but on “Me, Myself & I” he sounds like he’s mentally beaten and he’s already passed the torch to Southern rappers like Rick Ross and Pitbull. Que pasa Joe? There’s something terribly wrong when you can drop an album that’s well-produced and executed that still falls entirely flat. Even when he was at his least impressive in terms of lyric writing and breath control, Joe had a discernable attitude and style that seperated him from the rest of his peers. That personality is completely absent from “Me, Myself & I,” which may make this the most ironically titled album of his career.