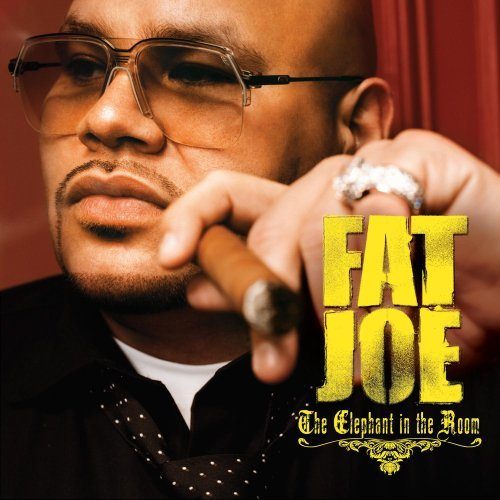 Fat Joe :: The Elephant in the Room

There is a little secret in the marketing world that you should know about. It is called “second mover advantage” – and it relates to a marketing strategy whereby you essentially wait for someone else to make the first move. Once they have done it, you take their formula and iron out any creases, improve on it, then act – whilst still appearing at least to be one of the first few to enter that particular field. Right now, in the UK music charts, an artist called Duffy is using “second mover advantage” (henceforth known as “SMA”) to great effect: after Amy Winehouse’s international success, she was one of two labeled “the new Amy” – and she let the other one, a singer called Adele, move first. Adele is selling well but is clearly pretty average. Duffy, selling spectacularly, is perceived as being better than Adele, and less of an Amy Winehouse clone. So really, a lot of “SMA” comes down to timing and perception.

Fat Joe has based the majority of his career using “SMA” – whether in the form of getting a leg up from Big Pun or, more recently, Lil Wayne; the alleged use of ghost-writers; mimicking aspects of Biggie and Jigga; using guests and producers that are hot or respectable at that moment in time… The list goes on. In other words, Fat Joe has pretty much never been what one might call an original artist. Yet, there are few like him in commercial hip hop right now – a genuine all-rounder. Plus he has been around a long time, and somehow survived the various dips in popularity that come with such longevity. From riding high with “What’s Luv?” and “Lean Back” to watching what was a very solid album (“All or Nothing”) seriously undersell, almost exclusively due to a beef with 50 Cent. So if we look at the aforementioned accusations thrown at him, isn’t it simply a case of a rapper doing what he has to do to stay in the game? Name one artist that hasn’t made compromises, and I’ll name a thousand that have. It is the way of the music industry. So, to borrow sporting terminology, Fat Joe has had to “box clever” or enter early retirement.

The problem with Fat Joe is that he stopped being an all-rounder on his last album, “Me Myself & I.” It didn’t work. Sure, there were a couple of hot songs on there like “Make It Rain” and “Damn” – but the rest of it arrived in the form of “street bangers” that weren’t very good. It pains me to say that this formula has been carried over to his new LP “The Elephant in the Room” – although it has been improved on to a certain extent. The first big single from the album is for the ladies in the clubs – “I Won’t Tell” featuring an excellent J. Holiday. The lyrics won’t win any awards but as soon as I heard it, it was clearly a smash:

“Fresh off the runway, pair of white Nikes
Phantom top drop on the I nine five
Pinksee suckers, who but I
On my way to party at Karu & Y
Now I ain’t gotta tell you that them boys pop bottles
But mami’s looking like Americas Top Model
She says your earring – look at that thing
That’s even bigger than the rock on my ring
Now she got a man who plays for the Hawks
I’m like come on, ma, you know me run New York
J’s in the background, put u to Bed
Says you got brains so I’m looking ahead
Then I’m looking for bread I gotta eat on these streets, shit
17-five bout to holla at G’s
I’m a real nigga, real niggaz do real things
And I could keep a secret is the song that I sing”

Produced by The Hitmen, riding high from their “American Gangster” success story, “I Won’t Tell” is a slightly clunky but aurally pleasing seduction, and the chorus is strong. The list of producers is uncontrollably mouth-watering: of course, The Hitmen, DJ Premier and Scott Storch. Oh, also The Alchemist, Street Runner and Swizz Beatz. Shit! I forgot to mention Cool & Dre, DJ Khaled and Danja. That is serious money right there. There are a few notable guests too, including Lil Wayne and KRS-One. Somehow – don’t ask me how – the music on this album isn’t that great. Yes, even I just read that list of producers, but it is predominantly their “B-list” beats, as opposed to their hottest level of work. Their are a couple of exceptions: “The Crackhouse” is a hard throwback beat put together by Cool & Dre; and “Cocababy” finds Danja smearing his sleazy bassline all over the crisp drum pattern. But that is pretty much it: “Drop” is the average Swizz Beatz sound, but Joe doesn’t really sit well on top of the beat; “That White” by DJ Premier is relatively average; “My Conscience” by The Alchemist, average. Average. Aside from three or four hot songs, the rest of the beats are (I can’t say “average” again) mediocre â€“ you get the picture.

In other words, can I really recommend you purchasing this album? Not really – and I would class myself as a Fat Joe fan. I will recommend that you purchase a few of the songs from iTunes, but that is the best I can do. Sorry, Senor Cartagena, but this really and truly sounds like a fairly strong mixtape – not an album. If you were short of a formula, you should have copied “All or Nothing” – not “Me Myself & I.” On the former, your personality came shining across, and that is what made it such a listenable album. Yes, this album is packed full of amazing producers – but what is the point if they are giving you substandard throwaway beats? When that is combined with a “music by numbers” approach that robs this of your own interesting personality, and fills it in with the corporate “identikit” typical rapper, the “Elephant in the Room” just got hit with a tranquillizing dart.