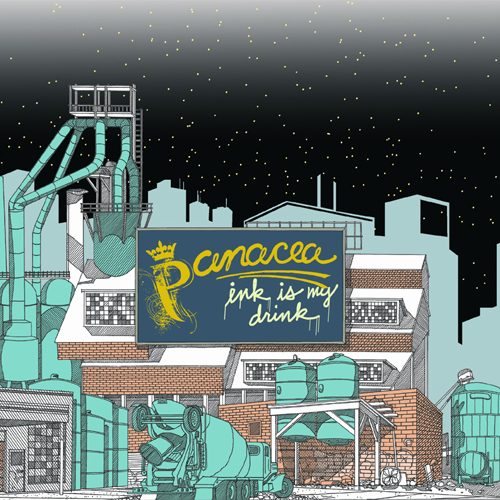 Panacea :: Ink Is My Drink

In every other review these days hip-hop musicians at large are addressed to the effect that rappers and producers need to flip the script, do themselves instead of others and just generally take more risks. As soon as they oblige, however, those who demanded creativity and originality turn their backs on what they now call experimentation they think has gone too far. Case in point – this review of Panacea’s “Ink Is My Drink.” I could go on about how I’ve fallen victim to the industry’s dumbing down to the point that I fail to comprehend anything beyond the most basic rhyme and thought patterns, or about how a rapper that I don’t understand essentially defeats the purpose, etc. but before I bore everybody with my latest rap-induced identity crisis I better accept and appreciate that Panacea chose to present their findings a little bit differently.

Panacea is K-Murdock on the sampler and Raw Poetic on the mic. The beats are an amalgation of melodic and rhythmic bits and pieces extracted from the vaults. Once you make it past the whirlwind that is the opening “Trip of the Century,” the album’s remaining tracks will welcome you with open arms, building on the groundwork the elders have put down. From the sound of things, K-Murdock’s approach is getting the most out of minimal equipment. Some of his transitions make for a rather bumpy ride, but similar to Count Bass D, Madlib or MF DOOM, Murdock becomes a bandleader behind the boards, conducting brass, wood, strings, drums and vocal harmonies into sometimes straightforward, sometimes a little bit messy arrangements. His intent is to make you feel at home with familiar signifiers of soul and funk, the single “Starlite” even pulsating with electro jolts. It wouldn’t be a contemporary hip-hop album without at least one sped up soul sample, so “Work of Art” takes care of that.

K-Murdock’s musical approach is mirrored by his partner, who offers on “PULSE,” “The world’s my archive / I break the laws of music just to raise the bar high / To me this is the playground.” The risk in this is that the final product, in terms of how it sounds, can come across underproduced, and, in terms of its density, appear overcrowded. “Trip of the Century” successfully tackles the task with a clear structure, providing the rapper with separate backgrounds for his adventurous trip across altered states of awareness. If it ultimately fails, it’s because Raw Poetic raps simply too fast to follow.

Outside of this introduction at super speed and the political “Burning Bush,” Raw Poetic is a man with a mellow disposition. He raps in a melodic but rhythmically monotone flow. He’s far from ignoring the beat, but something about how he expresses himself indicates that he’s doing his own thing regardless of what’s going on around him. He’ll throw in an old school phrase or a Native Tongue reference every now and then, but apart from that has his very own way of putting things.

Lyrically, he realizes he’s on a “a road less traveled.” When in “Ecosphere” he repeats, “Gotta be myself and I / Me myself and I put me on a natural high,” he almost acknowledges to operate on a plane few people will be able to reach. The ultimate challenge for Raw Poetic would be to musically and lyrically translate this “Me, myself and I” entity in a way that sends his audience on a similar high. As it stands, that kind of power is reserved for only the most talented of MC’s. While some of his efforts are just too abstract to make any immediate sense, others are easier to relate to. “Steel Kites” is about making the impossible possible, Poetic pointing out, “I don’t strap bombs, I only strap mics / A voice is a powerful thing, move my blacks like / Shaka, muthafucka, like we flyin’ a steel kite.” While he often comes from an introspective angle, here the Philadelphia native doesn’t shy away from addressing what he feels needs to be addressed:

“I speak my opinion even if you don’t ask me
Before you pick up guns pick yourself up a read
Pick up your seed
(…)
Pick up a trade instead of tradin’ your life for jail
Pick heaven or hell, pick another product to sell
Pick up your people like fam when they’re not doin’ well
Like mothers at funerals when they’re goin’ through hell
(…)
Pick the spot to help you see how your perspective could grow
Now pick up a gun and see if it possess the same glow”

“Coulda Woulda Shoulda” examines a failed relationship with a sense for wordplay that can relate so much more than a dry account of facts. The obvious quotable is “Playin’ like a lesbian to test my brain / Well, I’m a thespian, so for your acts I’m trained,” but almost everything is poetically put, to the point where you have analogies like “We coulda been a good pair like new shoes,” “Our two schools of thought clashed” and “So there’s no screw-you” all within the same segment. “Place on Earth” is another creation that, although gravitating towards ’90s underground abstractness, stands as a tangible song:

“I made music, y’all, coolin’ out by walls
or trees that’s tall, to realize that I am that small
Stood alone in the place I’ve grown
then left for what was shown, there’s so much unknown
about my home, a zone with aggravated tones
cause it never took the chance to know this kid that roams
Searched for wealth cause that made me whole
From the south to the north pole my words seemed cold
A scene old but when changed occurred
was just me feelin’, what I speak is also seen and heard
Teary-eyed, not quite but yet my vision blurred
I took a swallow of my pride and put my ear to the dirt
It was the soul, y’all, that got me all stirred up
Word up, like cold nipples fucked the earth perked up
And no matter where it is you choose to go
I find the home’s in your heart, not where your body flows
From the stage to the bar to where you travel abroad
If the world is ours, home is just wherever you are
and wherever you are that means your heart is never too far”

“Ink Is My Drink” is likely to get additional attention because the renascent Rawkus Records decided to get involved in its distribution. Based in Washington DC, Panacea actually already debuted in 2003 with the EP “Thinking Back, Looking Forward.” Since then, K-Murdock has been involved in Raheem DeVaughn’s 2005 album “The Love Experience.” “Ink Is My Drink” can be seen as yet another successful experiment to prove that straight up hip-hop can be just as soulful. Although at times somewhat absent minded, Raw Poetic is right there by his side, defining himself as a musician and an artist (rather than ‘just’ a rapper) with lines like “You see a table but I see a new beat / you see the walls but I’m composin’ a piece” and “My head seems to think like an acid jazz song / feet tap the beat and I’m driven by car horns.” At one point he even says “Musicians bring beauty more than beauticians.” Don’t underestimate the man’s love for music.

I will readily admit that there are a lot of things that I don’t understand on this record. I might even go as far as to blame the production and the rapping for that, which could both be clearer. Then again, how many rap albums these days give you something to chew on? And how many of those that do still compell you to stick around? “Ink Is My Drink” may not be a contender for album of the year, but its title is certainly among the most inspiring in recent years. And when it comes to the fundamentals of his act, Raw Poetic doesn’t leave you guessing: “It’s what my life is simply made of, the way that I think / the meaning behind the message, brother, ink is my drink.”