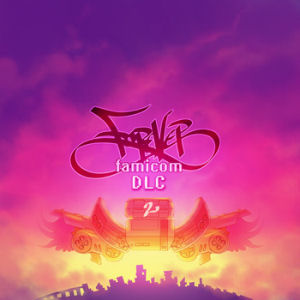 Everyone’s favorite hip-hop video game tag team, Mega Ran & K-Murdock, are back for the second (and according to them FINAL) installment of their “Forever Famicom” series. If you’ve checked out The Hip-Hop Shop’sexclusive interview with the dynamic duo, they admit to reaching a point of total saturation with looping 8 and 16 bit beats and busting fresh rhymes to ’em. While some might bemoan the end of their favorite trend, from an artistically creative point, one has to respect their decision to do new things and find new scenes, instead of risking becoming a parody of self.

Thankfully though the end is not here YET. A total of 14 tracks are found on “DLC 2,” packaged in a DVD longbox as many of Random’s releases are (such as “Black Materia”), which is an understandable cost-saving move for an independent artist. Of course if you buy the digital only release you don’t have to worry about freeing up space in your DVD or 360 rack, but you also miss the chance to have Ran and K custom autograph it your way, AND they’ll give you a digital download with it. Well that’s enough shameless plugging of their product – let’s get down to details. Half of the 14 tracks on “DLC 2” are instrumentals of the other half, which means there are seven new video game inspired songs in total. The opener “By Your Side” is set to music from Donkey Kong Country 2:

“Girl, I ain’t call here to talk your head off
But it’s a few things on my chest I gotta let off
You talkin ’bout I ain’t everything I claim to be
How you figure? Seem like you playin games to me
But if you wanna be real then holla at me
Cause I’m happy – don’t think you tryin to trap me
I ain’t got chips to blow on hair and cuticles
I flip verses, not street pharmaceuticals”

The quickly delivered first verse is a suggestion from Random to an unseen female that he can be Diddy Kong to her Dixie, if she’ll just show a little faith in his flow. “By Your Side” has multiple meanings though, as he also addresses the people who were his friends who doubted him when he opted to do gamer raps. The whole point can be summed up as “be loyal to me and I’ll be loyal to you.” That’s certainly the case with K-Murdock, who produces all seven new tracks, and who is also working as Ran’s DJ on the current #RaceWars tour crisscrossing the country. Back to the album though – if you didn’t get enough of Square-Enix RPG flows on “Black Materia,” you can get a mega dose of Final Fantasy VI on “The Ruler’s Back.” Even if Slick Rick was confused by the second verse, he’d probably approve of the lyricism:

“Due to velocity, space time dilation
I’ll be waitin in suspended animation for you to make innovations
But if your creation remains in nominal stasis
Then hip-hop as you know it remains basic
Which makes it theoretically impossible to see me
Cause if I wasn’t advanced, I probably wouldn’t be me
And if I didn’t exist on this physical plane
Then there would never ever be another fitting of the name, Random
And due to that paradox this verse’ll be history
Hoping to confuse you like it did to me
So let me break it down in plain English
I can’t be back if I never left, and me and K ain’t finished!”

With only seven new songs on “DLC2” it doesn’t take long to get through the whole album, but that’s also because the songs are enjoyable enough that you don’t want to wait to peep them. The theme music to the game Bad Dudes may not have seemed like an obvious choice to flow to, but thanks to K’s arrangement and Random’s nimble tongue, the combo is perfect. You might have to stretch your mind’s eye even further to see Super Metroid as a hip-hop beat, but not only does K put an effective spin on it, Random chooses to spit the verse as though he’s the game’s protagonist. “I know it’s not Mars, but the location baffles me/cause it’s got comparable equatorial gravity/but the surface is rumbling so I’m nervous/and I can barely move inside of this heavy suit.” I’m convinced that is the first time ANYBODY ever used the phrase “comparable equatorial gravity” in a rap, and only an emcee of Ran’s caliber could pull it off.

Mega Ran doesn’t do ALL of the verses though. He gives a little of the shine to Dale Chase on the Mega Man 3 inspired “Wilyn’ Out,” and Ariano gets some face time on Castlevania 2’s “No Rest.” The addition of instrumentals for each track gives you a chance to inspect K-Murdock’s technique and also offers you the chance to freestyle your own game inspired verses to the beats, or you can just cool out and play the whole thing start to finish enjoying the repeats in order. There ain’t nothing wrong with that – after all Pac-Man is the same board over and over again with slight variations, and Donkey Kong always repeats the same levels – it just adds extra stages into the rotation. Gamers know the deal, and there’s no question “DLC 2” is as Random would say “For the Gamers.” If you were already a fan of the previous installment, passing up on this “downloadable bonus content” would be a mistake.