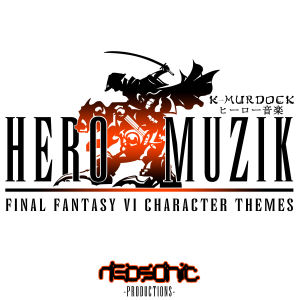 Let’s open this review by referring to the words of the auteur K-Mudock himself, explaining both his motivation for the new compilation and what gave him his inspiration:

“Hero Muzik is an instrumental series featuring remixes of the themes of the protagonists of some of my favorite role-playing games. Final Fantasy 6 has always been a favorite, so I decided to base the first volume of the Hero Muzik series off of the game’s 14-playable heroes and heroines. This project aims to pay respect to the timeless music of FF6 composer & video game legend Nobuo Uematsu.”

Actually to be fair not all of that was written in the first person, but I changed up a word or two where appropriate to put it in his own voice. After all “Hero Muzik Vol. 1” is definitely his statement, and it’s a statement made without a single word being uttered, so we should at least hear from him here. Now if you know K-Murdock that’s not necessarily a surprise. Even though he’s definitely one to talk at length on any subject, he’s not one to RAP about it. Kyle’s preference is to let the beats and melodies he creates do the talking.

That desire makes K-Murdock a lot like the man he is paying tribute to on “Hero Muzik Vol. 1,” Mr. Nobuo Uematsu. You’ll never play a video game he scored the instrumentals for and hear a single word from him, but you’ll be hearing his voice all the same. Uematsu’s fame in the gaming world is well-earned and deserved because of his belief that a video game’s score should be orchestral and cinematic. A good game becomes great when you can lose yourself in the melody of the world you are exploring, making you truly feel like you’re part of this larger than life experience. Uematsu’s attention to detail helps you to feel an emotional resonance with the characters on screen that text and graphics alone could never do.

In choosing Final Fantasy VI for his first edition of “Hero Muzik,” K-Murdock not only chose a cult favorite among gamers but one of the best examples of Uematsu’s work. While Final Fantasy VII may be more well known and widely remembered, the distinctive songs he made for each hero in FFVI have stood the test of time and get an enjoyable update from the hip-hop producer du jour in charge. Celes’ theme seems even more haunting as “Ballad of the Lone Warrior” with a little rearrangement and a backing beat, though it maintains the somber tempo and spirit of the original. The Mog theme “Kupo-cabana” changes the tone a little bit though, making it a dreamy ballad as opposed to a whimsical setting for a side story. “The Pride of a Nation” is a little slower than Cyan’s original theme, but maintains that sense of honor and duty all the same. It starts with a tragic tone, apropo given Cyan’s tragic story of loss in the game, though before the song ends K flips it into a hopeful tune.

K-Murdock clearly knows his subject well on “Hero Muzik Vol. 1,” though one may find at times these protagonists are a troubled lot. The characters and their motivations in Final Fantasy VI are to say the least complex, so even to call Locke’s music “Thief’s Theme” is to tell you nothing about Locke in the slightest. Perhaps after listening to the album, you’ll want to know more about this motley crew.