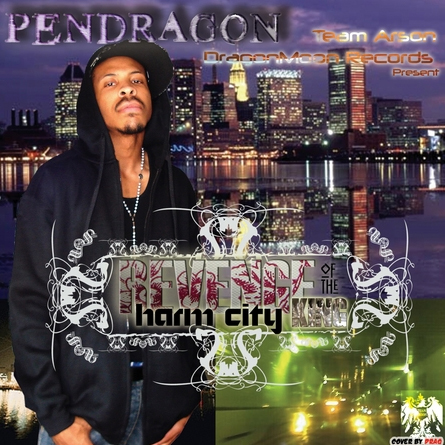 PenDragon’s mixtape hits the listener with a ton of questions from the jump. Who is PenDragon? Where is Harm City? What is Team Arson? What is a PenDragon? Luckily the mixtape answers all but one of those questions. PenDragon is the head rapper of Team Arson, which is a group of rappers and producers that most notably includes producer Street Heat who has produced for DipSet. Team Arson and PenDragon are based in Harm City which is yet another nickname for Baltimore. Now according to Wikipedia, “pendragon” was the term used for the head dragon, or leader of medieval armies. So in that sense PenDragon’s name is both a play on words and an allusion to his role in Team Arson. If you realize that Team Arson refers to fire which dragons were supposed to spit and that PenDragon is a dragon with the pen meaning he spits fire and is the leader of a team who commits arson with a producer who makes street heat, it becomes apparent that Team Arson has the name game down tight. Add to all that a logo that includes a bird that looks like a Phoenix and Team Arson almost goes overboard with the fire and tie ins. Tight word play/names aside, the real question is whether the crew puts as much effort into their music as they did choosing their names.

Being a mixtape, there’s only so much one can surmise about PenDragon and Team Arson. While early on PenDragon declares that he doesn’t like spitting over other rapper’s beats, roughly half the mixtape consists of Pen dropping new verses over familiar beats. “Hustlin” is a freestyle over the beat from the Rick Ross song. “Crazy” does the same to the Gnarls Barkley track. “Outkast” switches things up a bit by having PenDragon spit over various beats made famous by Outkast years ago. By now the most apparent thing is that creativity is lacking in giving the freestyles titles. The redundant titles reflect the way that this approach limits PenDragon. If your freestyle is based on the same bland topic matter of a song whose biggest draw is a tight beat and hook, it limits you to the same level of the original verses. “Hustlin” showcases this as PenDragon just drops forgettable punch lines like “been ridin dirty before Chamillionaire” (which is wack on so many levels, since Chamillionaire wasn’t ridin dirty in his song and dropped it about a year ago, meaning PenDragon been ridin’ dirty for about a year and a month).

The freestyle tracks are the weak point of the mixtape though PenDragon does manage to drop verses at the same level of the Maino’s, Papooses, and Gravys of the game. When the Team Arson producers step in and give PenDragon material to drop full songs he shows a lot more strength and creativity. Street Heat gets grimy with the club beat on “I Told You So” and PenDragon drops verses that are club friendly but maintain a street edge. Street Heat drops more gems on “I Know” and “The Crown” with soulful beats reminiscent of early Heatmakerz tracks. On “The Crown” PenDragon reps hard and makes a good case for being the hottest rapper out of Baltimore:

“When my name’s brought up there’s a certain sort of rush
I invoke excellence, make nigga’s nerves jump
Since classic I’ve been at it, you? Nah
You a never was, has been and this land is too savage
Every area is respectful of the 82 special
The click’s boom and blast will make the whole crowd settle
We walked on blocks while yall drove around them
Y’all were scared to death, I heard your hearts pounding”

It’s not the deepest verse but it showcases PenDragon’s confidence and swagger, his main selling points as an emcee. Producer Drag also contributes heavily, but tends to be a few steps behind Street Heat, dropping simpler beats.

PenDragon is definitely as talented as every other hyped mixtape rapper out right now. His flow and voice evoke a clear charisma and confidence on the track that makes him engaging even when treading familiar water. Though the mixtape overall isn’t above average, PenDragon has a better foundation than most rappers. Street Heat is a talented producer and Drag shows definite potential. If they concentrate their efforts, Team Arson could surely put together a solid album of material. As it stands, “Revenge of the Harm City King” is worth a few spins if you’re a fan of mixtapes and the freestyles that come with it. Others should wait until PenDragon drops a proper full length which will almost definitely have a few tracks worth peeping.