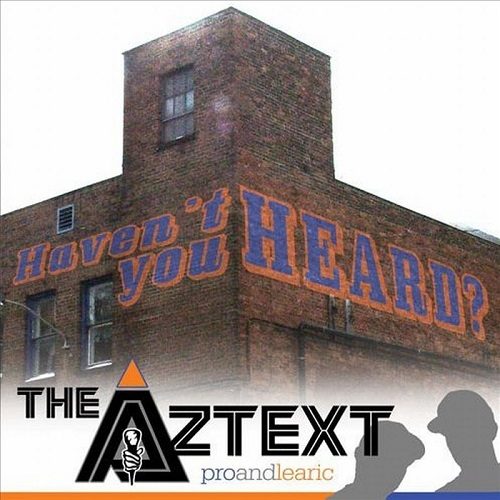 The Aztext :: Haven’t You Heard?

I was a virgin to Vermont hip-hop until The Aztext popped my cherry. It might have been my proximity to the duo, but for one reason or the other, I awaited going to bed enthusiastically. The back of the cover shows the group in typical hip-hop attire, DJ equipment in hand, but instead of a NY park bench, they sit on some stylized wooden L.L. Bean structure with the New England woodland behind them. Not Staten Island, certainly not gangsta, but in itself the photo is a healthy break from the norm; when was the last time YOU caught the Montpelier hip-hop festival?

Whether or not the event exists is beyond me, but if it does, don’t be shocked if The Aztext headline. Neither Pro nor Learic reinvent the punch line, nor do they enlighten crowds with thought- provoking narratives. They do excel in connecting with the rest of the rap world, crafting their sound around themes not so far from anything we’ve already become familiar. As such, they invite challenges they could’ve done without. In perfect honesty, I would’ve made a purchase for an Aztext t-shirt if they rapped about moose and maple syrup, but if that were the case, the funky beats and high-profile guests might not have worked.

Without ever delving too deep, Pro and Learic remain true to themselves lyrically, never peppering a generally fun album with any violent lies or drugged-out anthems. When they’re on their game, they’re a lock to grind out grade-A college radio head-nodders, and on the album’s best tracks, that’s just what they do. Krumbsnatcha guest-stars on the spellbinding boom-bap of “Who’s Wit Us,” but effectively illustrates anything and everything hindering the album as a whole. When the beat is bangin,’ The Aztext are right at home. When it’s dead, they do little to resurrect it. Where Krumbsnatcha will always have the luxury of Premier, The Aztext hope on every track for the kind of production they need. Luckily, when they get it, they know just what to do.

“Haven’t You Heard” kicks off tremendously sharp with “It’s True,” a jazzy banger that’s laid my speakers to waste for a week and change. Guest vocalist Memms lends a bit much to a classic loop that doesn’t need him, but his hook is a fine assessment: “you know it’s true; the music can stop you from feeling blue!” Short, sweet, and appropriate, it feels for an instant like “3 Feet High And Rising” 2006. It’s 4:20 of head nodding and as fun as anything this year, but unfortunately, it holds a standard too high for the album to maintain.

“Haven’t You Heard” survives, but quickly becomes congested with indirect battling, on- the-come-up monotony and crummy, simulation inspiration. In the mix is second-rate call-and- response on “When I Say,” half-hearted political raps on “You Is You,” and a good-as-sedated Wordsworth on the disappointingly boring title track. “Ultimate Tag Team” lazily plods along with irrelevant self glorification over a yawning beat, and “Better Act Like You Know” is a fruitless stab at a nasty Premier hook. The beats improve steadily, “Learn to Talk II” and “This Right Here” keeping things lively, but The Aztext continue to emphasize their inability to write a chorus throughout. I was really proud of my nine-year-old bro for coming up with the hook for “Reverie”

“9 to 5” sees Pro and Learic at their conceptual best, frantically and frustratingly reaching their occupational boiling points over a beat that feels like it could pop at any second. It’s the most unity the raps ever achieve with their backdrops, but the track works in balancing the album’s lopsidedness. Pro and Learic are both good emcees, but their vocals fail to put “Haven’t You Heard” in motion when the beats can’t. Rather, they compliment the bangers and each other very nicely, and even put little ol’ VT on the map. It was my first time going this way, but like it or not babe, I’ve had better.