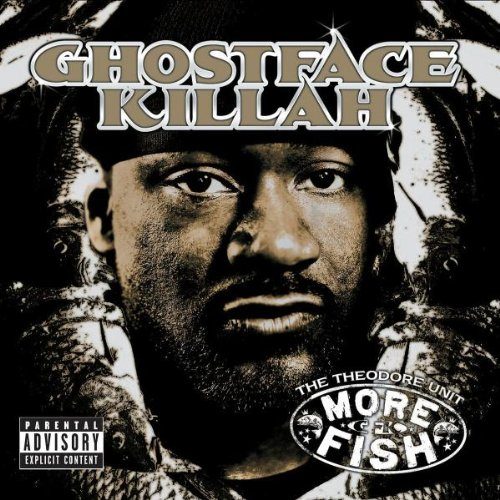 2006 was a fine year for Ghostface Killah. While purists mourned hip-hop’s alleged demise, Tony Starks just made great music. “Fishscale” was everything that ever made him the heroic figure he is and more; grimy, drug-infested and utterly crime-ridden, its imagery damn near bordered Hollywood, while a dream team cast of beat makers did what they could to put together a staggering setting. Critics drooled, fanboys flooded message boards in delight – it was all the proof anyone needed in cementing his elite status. And although sales weren’t up to par, an increasingly underground entourage made Ghost look as much a giant as ever.

It might not be cashing in as much as it is flossing in the faces of the inferior, but either way Ghost is back for one last hurrah in ’06. “More Fish,” while almost TOO aptly titled, would seem to be the perfect marketing draw; if more of the same dope from earlier this year, why not try and push another 400,000? And no, at 17 tracks and 58 minutes, it’s hardly a batch of leftovers.

Frankly, it’s too good to be. Throughout, Ghostface is what he’s always been: emotional, aggressive, descriptive, hilarious and even romantic, but as fun a listen this second go-round is, it’s still pretty far from what made “Fishscale” an instant classic. Just some nine months since its release, Ghost can’t help but sound if not the least bit pinched at the creative spout, relying more heavily on battle rhymes than finely detailed narratives. “Ghost Is Back,” running alongside a flying upright bass and a racing break, sees ‘Face at his utmost old school: “with more blubber than a Ruben Studdard I grease the pan with rhymes and y’all can’t believe it’s not butter.” Not the striking movie scene that most of “Fishscale” was, but at the very least it’s Ghostface having fun. “Outta Town Shit” is Ghost glorifying his gangster, but glorifying is for critics, fans and amateurs, not a top 5 emcee. “Greedy Bitches” wishes it was “Gold Digger,” but comes off almost forced, if not just sorely lacking in energy.

Ghost might’ve gotten a little lazy with the pen, but his story-telling ability still manages to shine. Coincidentally or not, the “name” tracks are especially nice – “Alex” sees Ghost flipping the unlikely tale of the movie “Ray” and its stolen script, and he teams up with a surprisingly vivid Trife Da God on “Josephine” for a riches-to-rags tale of drug addiction and death. “Block Rock” is a show stealer, Ghost assuming full-on kingpin mode over Madlib’s enigmatic backdrop: “If Lil’ Jon can ice his cup, I’ll top that shit and ice my nuts!”

Contributions from A-listers Just Blaze and Pete Rock are noticeably absent (not to mention a certain Robert Diggs), but production is MORE than handled by smaller names. MF Doom, who continues to improve as a producer, puts forth two of his finest beats to date. “Guns N’ Razors” does jack a Prince Paul drum loop, but the Supervillain’s sci-fi horns are epic enough to forget. The aforementioned “Alex” might be even better; cinematic sirens and a nasty bass line setting Ghost up something proper.

Expectations weren’t high for “More Fish,” and Ghost indeed fails to reach the same stellar plateau set as “Fishscale.” Time could certainly be an excuse, but over an entire LP, this is the first time ‘Ghostface Killah’ and ‘inconsistent’ could ever exist in the same sentence. It’s still a worthy investment and a must-have for fans, but I could’ve waited for an even fresher catch.