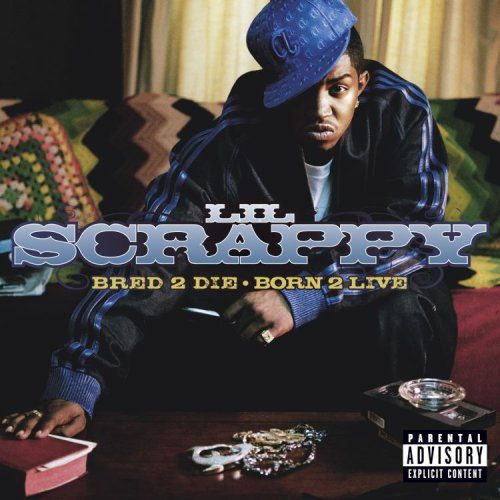 Lil Scrappy has a simple declaration on the opening track of his new album: “I’m Back.” Good to hear Scrap, but I think most of us were not aware you had left in the first place. Ever since appearing on the double album “The King of Crunk & BME Recordings Present Lil Scrappy & Trillville,” Scrappy has consistantly been a factor on Lil Jon produced tracks as both a soloist and guest star. In fact it would have been damn hard to go anywhere in the last two years without hearing his drawl echoing out of car stereos, club speakers and stadium P.A. systems. Jon’s beats and Scrappy’s flow seem tailor made to get people amped up from “Head Bussa” to “No Problem” to his current hit single “Money in the Bank”:

“I’ma get that, dough and fuck with dem, hoes
Young ladied that know me know Scrappy’s a, pro
Fill up at the, bar go get a mas-sage
Find me a couple we can make it a, me-nage
You be tryin, hard but nigga don’t, start
You be doin shit is gon’ get you to the, morgue
I go get that, paper a mega fuckin watch
I be pullin out knots, that can buy me a, yacht
Hold on baby, please, go get on yo’, knees
If you don’t do it for me then do it for the, cheese (yea)
I got extra weed (yea) money long like sleeves (yea)
If a nigga try to creep, I got extra heat
Got a bank account {*cha-ching*} with a large amount
If a nigga wanna talk, nigga we can let it bounce (bounce)
Take it outside, nigga fuck fallin back
Killers run up in the club, ballin with a bigger stack”

At one time a version of the song existed that featured Scrappy on his own, but that was quickly replaced by a “Remix” featuring Young Buck from the G-Unit clique and that version is the only one to be found on “Bred 2 Die * Born 2 Live.” Despite sounding like a trademark Jon beat for being simple and effective, the credit’s actually due to Isaac ‘Ike Dirty’ Hayes III. The name is apparently not a coincidence – what little I can find on him suggests he IS the grandson of the bald-headed funk and soul legend, although hopefully unlike his namesake he’s left the Scientology alone. You certainly won’t see Scrappy or Jon throwing up gang signs for Xenu on their bouncing “Gangsta, Gangsta” duet, a track which has little in common with it’s N.W.A. namesake other than being hard as nails:

“Come around, fuck with me and then you might get rushed
Nah I ain’t with the yappin I’m with the gat go bust
Keep fuckin with us, we armed and dangerous
Show you the meanin of ashes to ashes and dust to dust
Dippin laid back in the ‘llac
I don’t know if them haters gon’ handle that
Keep my motherfuckin hand on my fuckin gat
Ay y’all motherfuckers better get back”

And so it goes in the world of Lil Scrappy, a man who is literally defined by his name as urban legend has it that Jon signed him to a record deal after seeing him “scrap” during a club fight related to his performance. Scrappy does try to break out of formula here and there to show a glimmer of light in his world of darkness. “Livin’ in the Projects” melds a smooth Jonathan ‘JR’ Rotem track and some 2Pac “Smile” samples on the hook into a narrative “back in the day” cut about surviving rugged ghetto life to become a successful recording artist. Kadis flavors up “G-Shit” so Olivia can sing the hook, and Scrappy aims for the crossover charts with a flow about getting the ladies hot. The impression he’s a long lost member of G-Unit on this track is only deepened by the following cut “Nigga, What’s Up” featuring 50 Cent and the album’s Eminem-produced closer “Lord Have Mercy.” Apparently the label he’s establishing is even called “G’s Up,” so it seems like he ought to switch from rocking a blinged out BME chain around his neck to a G-Unit piece and be done with it.

Will Scrappy’s crossover success continue on “Bred 2 Die * Born 2 Live?” Without question. Has he improved as a lyricist since splitting his debut album with Trillville? That’s slightly questionable. Perhaps one could say he’s moved up from being totally unredeemed to mostly tolerable, although his raps still feel like rhymes strung together simply to fill spaces between hooks and not as though they stand out in their own right in any way. Scrappy himself often seems surprisingly lethargic for a man working with so much crunk, an irony that’s only heightened by doing a track with the amped up Three 6 Mafia on “Posted in the Club,” a group which also has lyrical issues but which has at least learned to compensate for their raps with an overexuberantly energetic delivery. Scrappy has come a long way on “Bred 2 Die * Born 2 Live” but he also has a lot of room for improvement and needs to come back even stronger on his next release to stay relevant with or without Lil Jon’s beats.