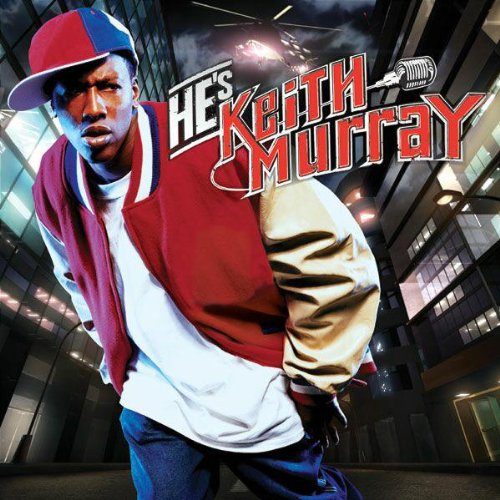 Well DUH. Who did we think he was, Dick Cheney? The redundancy of the album’s title may leave you scratching your head, but the long overdue release of Keith Murray’s “He’s Keith Murray” will have you reaching for your wallet. HOL’ UP THOUGH. That’s what you read RapReviews.com for right? You want to know if after a five year hiatus from releasing albums, he’s still got it. You want to know if he spits raw lines to raw beats, and makes that heat to stomp your feet. You want to know if spending time locked up made him rusty, or whether his flow is still polished like a diamond.

“Oh My Goodness” proves from the early going that he’s still a good lyricist and excellent rhyme spitter. In fact, he has improved markedly in these areas since he first debuted in 1994. Back then Murray was all about trying to impress people by using big words with lots of syllables. Today he doesn’t have to put “mythological astronomical” and “comical” in every sentence just to prove he’s dope – he just lets his words speak for themselves:

“And you a lyin muh’fucker like them people in court
So when I see you I’ma pop you top like a cork
I pack flow like ammo, spit like camels
Come through and bless your whole crew like +a-choo+
But some still wanna HOLLA, pop they COLLAR
Fuckin with me like I run a funeral parlor
Linguist lyricist out for CHIPS like Estrada
Bilingual MC’s even couldn’t do me nada
With this mic I’m handy, flows be dandy
It’s a +Full Moon+ and hoes wanna fuck like Brandy
Yeah I been hated on, you probably heard it
And I kicked a little ass, but them niggaz deserved it
And I’m still in the hood and I still rep the hood
Still teein off on long green like Tiger Woods (FORE!)”

You’ve probably heard the lead single “Yeah Yeah U Know It” by now. Produced by Just Blaze and featuring his Def Squad compatriots Erick Sermon and Redman, the song only had two problems: a beat that sounds clever at first but gets monotonous rather quickly, and the fact he gets shown up by Reggie Noble on his own track. Can’t hardly blame him for coming with the fire though, that’s just his style:

“Yo, you want the bad guy – here I am!
I got them hoes on gilla-cam
Throwin they drawers in the ceiling fan
You as small as a kilogram
I’m an airplane ridin over Colombia, ya middle man
I’m the boss, Doc-ta Binaca
Shut up all the gossip, bring the rasta
I whoop ass like Ike Turner any day
When I stomp MC’s out I yell – Annie Mae?
Whether I’m hot or not, pidgeons gon’ flock
They gon’ get that wig done for diggin on Doc
Find me ’round the aisle in the frozen food
Because, I am so cool…”

Murray’s second single “Candi Bar” serves him much better. With production by Khalil and an interpolation of the song “Havana Candy” by Patricia Austin, the sugar sweet nature of the song is hard to debate. After all, there’s a reason fly women are called “honey”:

“Aiyyo come and rest your feet my little chocolate soufflÃ©
I know you tired, you been runnin through my mind all day
And oh my goodness! Can I get a witness?
This roundy brownie is something to see (oooh-WEE!)
I never had a craving like this before, I’m addicted
Lord have mercy, please give me strength
Dark, rich and thick like a fresh baked cake
Just thinkin of your shape girl I catch a tooth ache”

Murray’s not afraid to express a wide range of his inner self, from the tough to the soft. Few rappers would open up as personally as he does on the piano-laced Clark Kent production “Christina”:

“Yo, 2/27/98
I wrote a check out H.W. Funeral Home
For my little sister Christina, 15 years old
Damn man, this fuckin world is so cold
Eight months before I had to do three years
Comin from the airport, my face burnin with tears
I had this black cloud hoverin over me
Far as back as I can check down my family tree
It’s been with me since my first LP
Second LP I was sittin in court
Third LP I was trapped in the belly of the beast
Guided back to the streets
By the power of the mind and positive thoughts”

Say WORD. Murray showcases a wider range of his potential to be more than just a comedic/punchline rapper than at any other time in his career. Still it’s not all roses for Keith Murray just yet. “Sucka Free” suffers from a beat that’s all of Erick Sermon’s producer cliches rolled up into one. While “Say Whaatt” with Redman is amusing one time, the Jazze Pha beat is diametrically opposed to Murray’s throaty, high octane flow. Please note Murray – you’re not Jay-Z, and Noble is not Bun B. The album does get back on point though with the Trackmasters produced “Da Ba Dunk Song,” the ode to rumps we’ve been waiting for ever since he first cameoed on “Fatty Girl”:

“You know I’m right, don’t be rude
It’s just a compliment stanky, you should say thank you
To the ladies in the street that ever shook my hand (hi Murray)
And thanked me for representin that fat back
That’ll raise your antennas and keep you on point
We don’t be like yo, ‘She got a ba-doink-a-doink bro!’
God damn boy, ooh it – come equipped
With 3-D thongs and shake included
But it’s rated PG, little boys can look
Little girls write about it in they diary books”

As the album draws to a close with “On Smash” featuring Busta Rhymes and Kel Vicious, “Say Goodnite” produced by Sermon and Pete Rock (a highly effective union) and the biographical “Child of the Streets (Man Child)” you’ll find that “He’s Keith Murray” as a total package is an enjoyable experience. His time off didn’t make him rusty, nor did his time away make him weak. In fact it seems that the hardships Murray went through over the past five years have actually given him more focus as a writer and rapper. Even when he’s being his trademark silly or playful self, a sense of greater maturity in style shines through that’s hard to ignore. The only thing holding this album back may be a few weak tracks, and the buzz kill this album received by being pushed back from release numerous times. In the end, “He’s Keith Murray” doesn’t seem so redundant after all – like his album itself, it’s a statement of his presence in rap. Unless he gets locked in the bing again, Murray won’t be going anywhere for a long time to come, and that’s the most beautifullest thing in this world.