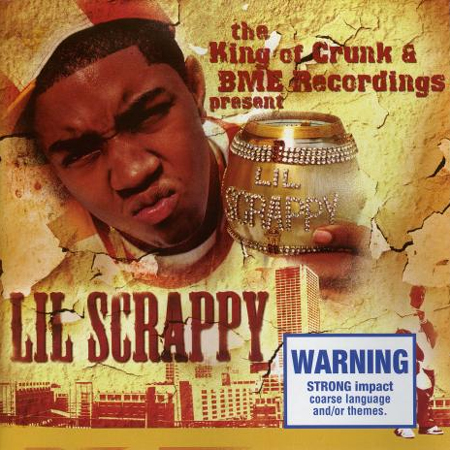 The title of this album has to be any radio DJ’s nightmare. Since it’s about a billion words too long and gives the reader useless information to boot (who cares “who” presents “what” at all) I’m calling it “Lil Scrappy & Trillville” for short. Just to make sure this isn’t misleading, that doesn’t make Lil Scrappy & Trillville a group. In fact other than being “presented” at the same time and having similarities in their Southern style, they’re not related. This album is actually like getting two LP’s for the price of one, with the first half of the album being Scrappy’s and the second half being Trillville’s. It’s not at all a bad idea to give the consumer his/her money’s worth by introducing two new artists at once, just make the damn title of the release shorter next time!

Both artists have achieved some fame and recognition with independent hits in the last year. For Scrappy, his noteworthy song is the Lil Jon produced and cameoed “Head Bussa.” It’s a rowdy track typical of Jon, with a quick stepping backdrop paired to some deceptively slow synths and vocals. Even if Jon’s style might be nearing the 14th minute of his fame, there’s no arguing that he got this one in under the wire. The rowdy sing-a-long chorus “We’ll knock a hater out, we some head bussaz!” is a surefire club hit, which ironically makes Scrappy’s verses seem a little like the filler in this sandwich:

“I made up my mind that I’m on strike and I’m ready to fight
Takin out my steel, killin every fuck nigga in sight
We had spite, I knew you bitches didn’t wanna brawl
(Uh whatcha say?) Bitch I’ll swang on all of y’all
I’m the beast from the East, wit da fangs on my teeth
I’ll murder all you bitches in the middle of da street
And I don’t give a fuck if you don’t like me
Straight knock yo ass out into captivity
Down South, I’ll ride, shoot and kill homicide
It be nothin shawty ’til the day that I die
We strive, on tearin heads up
And everywhere we go we gon’ tear dat bitch up
We don’t give a fuck about havin no click
The A got my back and they ain’t takin no shit
Excurse me shawty, get the fuck out my face
Befo’ we get mad and shoot up the whole place”

I’m not trying to fault Scrappy on getting down for his crown. The truth of the matter is though that this rap is your generic “crunk” rap about being mad, fighting, and as the chorus indicates busting heads. Scrappy has breath control, a decent vocal tone, and absolutely nothing new or original to say; the simplistic rhyme structure of his raps doesn’t even indicate that he’s trying to be. As for Trillville, the first hit this group scored with is the equally rowdy “Neva Eva” which also featured Lil Scrappy as a guest. Here’s a sample:

Big Mouf: “Get the fuck back, get the fuck up out my way
I ain’t playin nowaday, pussy nigga whatcha say?
Meet me anywhere, I don’t care, it don’t matter to me
Cause if ya fuckin step, I’ma step in yo’ vicinity!
What, you think I’m a ho? Nigga, please! You ain’t on my level
Get some rank bitch, while I’m diggin yo’ grave, with a shovel
Time after time I ask myself is it really clever?
For you to get with me, bitch nigga you can neva eva
You rank on my level, I’m pushin Chevrolet pedal
If you niggas fuck with me I got that chrome, heavy metal
Never settle, for less, but always strive for the best
Most these niggaz playin chief I’ll put ya straight to the test”

Consisting of Big Mouf, Don P and L.A., it’s sad to say that with three different rappers it’s remarkably hard to find a personality in any one let alone dominating the other two on a track. In fact, when Scrappy comes in as a guest on the song, his “Prince of the South, on the map/knock yo’ thoughts out and leave yo’ brains in yo’ lap” is simultaneously the most clever and most interesting part of the presentation. At least it’s got another Lil Jon beat though.

In fact, with relatively unremarkable raps about how gangsterish they are, beats are almost entirely the focus of “Lil Scrappy & Trillville.” It’s not that this writer for a second questions they rep for Atlanta or the Dirty South, or that they had a rock hard upbringing to match their attitude. Too many artists today fail to realize that “being real” or “hardcore” is not the same as being entertaining though. Would you be entertained by hearing a wino talk about sleeping on park benches for an hour? Maybe if his stories were funny or clever, or if he had an engaging voice, but most likely not. Even given the benefit of the doubt, only one out of a million could rise to a Wesley Willis like level of notoriety. The rest would just be boring drunks. The bottom line is that no one would dispute that Lil Scrappy and Trillville have had a hard life, love to start fights, and in their own neighborhoods might even be considered “bully of the block.” So? Even lyrical lightweights like Three 6 Mafia have it all over these guys, just on their charisma alone.

There is entertainment to be found though. Trillville’s “Get Some Crunk in Yo System” has a THUNDEROUS Lil Jon bounce and a suprise guest verse from Pastor Troy – another Southern rapper who has more personality than all these dues put together. They also score on the raunchy sex rap “Some Cut.” On Scrappy’s side, a spooky piano loop gives “No Problem” a healthy injection of attitude. “F.I.L.A.” is Scrappy and Jon’s ode to their favorite shoe, disguised as the phrase “Forever I Love Atlanta.” And as silly as it might be, there’s something anthemic about “Diamonds in My Pinky Ring” that might even make the Big Tymers jealous. In the end though, it’s unfortunate to say that “Lil Scrappy & Trillville” is dressed up as being a good value when in fact this two-for-one would have been better if they followed GZA’s hip-hop motto: “half short and twice strong.”