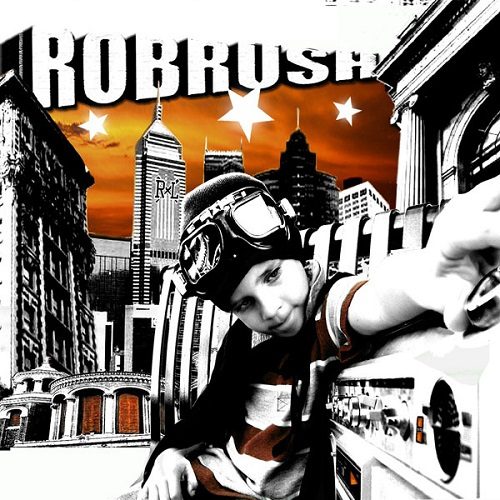 Perhaps in its satire, but more likely for the fun of it, Rob Rush’s press kit boasts a superior write-up. In a column of facts that may or may not be true according to his label, he is The Game’s replacement in G-Unit, owns over 300 custom-made grills courtesy of Paul Wall’s cousin, finished 4th in a “Rob Rush Lookalike” contest, and sold 2.5 million dollars worth of candy bars and dental insurance whilst in grade school. Sued by Kool Keith for raising a testimonial statue without permission, he lost all profits. Oh yeah – and he doesn’t like ice cream.

Rob Rush does what he can to make it public: he’s here to lighten things up. Mixing an odd blend of his own personal quirkiness with an extremely old school vibe, “Childhood Hero” might as well have went as an Ulramagnetic tribute after all. You can cut violence, materialism and booty shakin’ right out of the picture; this is pre-1992 at the core. Rob likes joking around, but at his best, he’s laughing at himself. “Boy’s Got Brains” is an exploration in his own lost potential, where the lovable loser can only lament: “I’m a wage slave, always pulling down my hourly/while all my old friends pick up a six-figure salary.” He’s clever when he’s feeling it, even closing out the album with a particularly nice touch: concluding a lovesick stream of consciousness, Rob adds, “that’s what you told me and I trust you/I wanna see your smile tomorrow; I lov…” Instead of finishing his line with “love you,” we’re left hanging on the same note he might be in his actual life.

Such moments highlight “Childhood Hero,” but mainly stand out due to the rest of the album. God bless his humor, but his said originality hardly justifies a line like “you play the game, I’m a referee.” A guy like KRS-One might have earned that position. Rob Rush? Come now. And as different as Rob makes claims, you’d think he’d come a little harder on “1, 2, 3:” “It goes one for the headphones, two for the clubs, three for the cats out here that show me love.” Blah, blah, and a dash of more blah. These days you need a Premier banger or damn near the equivalent to get away with that whole shtick.

Rob reaches to hip-hop’s heyday with an outstretched arm, but in doing so his style becomes played out by 12 years plus. Old school can be good (see Jurassic 5 and People Under The Stairs); the trouble is keeping things relevant. Where successful acts are able to bridge a tricky gap, Rob bums around in stereotypical braggadocio, whiter, nerdier and often cornier than a ghost-written Big Daddy Kane verse could even make amends for. On “Give It To Me:” “I know the culture and I’m an active part of it, the essence of hip-hop and I’m at the heart of it.” One-liners like this might have melted faces in 1987, but hip-hop has become much too demanding for it to even get by.

The production, while as old school as its master of ceremonies, is very good. Heavily sample-based, many of the beats dangerously border gimmick, but remain great fun. The title track is awesomely spontaneous, producer Richie Cunning splicing various classics like “Paid In Full” into his own funky break. “Let ‘Em All Know” knocks with two looping piano chords and throwback horns, and the opening “Introgator” is a pounding blaxploitation break for Rob to rap over in triple cadence.

Rob reads more like a comic book than a hardcover novel, but even then the cover illustration builds a better story than what’s ever delivered. If he only used his sense of humor and life experiences more than he spat up rehashed old school cliche, “Childhood Hero” could have been much more than the “brand new” antique that it is. Rob can keep being a goofball for all I care; he plays the part well. Still, maybe the next time I read his resume it’ll boast a few more serious accolades.