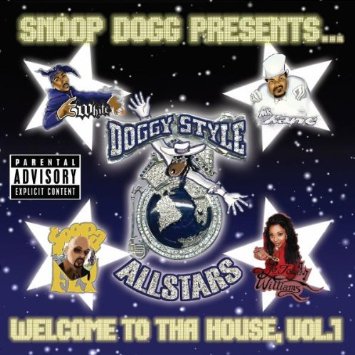 On one hand, the instant cynic in me says that this is a callous attempt by Universal Records to suck up to Snoop by distributing for his imprint label Doggy Style Records. The music industry has been in decline for a while now (they like to blame the internet for it, when their exorbitant CD prices and shoddy albums are the real reason) so the competition for the services of it’s few bonafide stars is only getting more and more intense. On the other hand, Snoop has been a father figure to up-and-coming artists for a decade running, from Daz & Kurupt to Tha Eastsidaz. None have eclipsed him as the alpha male of the pack, but a lot have garnered loyal followings in their own right.

The definition of “AllStars” as pertains to this album though is somewhat questionable. In sports the term usually refers to an athlete whose prowess and charisma have propelled him to fame and popularity beyond his colleagues, often with an astronomically large salary to match. Other than Snoop, none of the artists here fit in this category. That’s not to say a few of them aren’t instantly recognizable. Mr. “Deep like the Mind of Minolta” RBX is a recurring presence. Ironically were it not for his feuding with Dogg Pound and Death Row in the 90’s he might truly be an “AllStar,” thanks to his trademark vocal tone that’s always ear-grabing. Even more deserving of this accolade is Lady of Rage, possibly the hardest female MC in all of rap sans Heather B. Despite her strong underground popularity Death Row never understood how to market the firespitting femme fatale and her solo LP “Necessary Roughness” languished in obscurity. Unfortunately “Unfucwitable” will not raise her profile in today’s market. The lyrics and the larynx are still tight, but a surprisingly weak beat from DJ Premier gives the song zero push – worse still, it’s her only contribution to the album.

The rest of the artists on this compilation are a collection of previously unknowns and a few semi-knowns who have made cameos on Snoop’s other projects. You may recognize Soopafly or the songstress LaToiya Williams, but odds are you’re saying “what in de hail” about artists like E-White, J-Dog, Leicy Loc and Vinnie Bernard. Occasionally these artists are propped up by more legit “AllStars” from the hip-hop diaspora such as Cam’Ron and Nate Dogg on “Don’t Fight the Feelin'” or “Don’t Make a Wrong Move” featuring Prodigy and Special Ed. It doesn’t help much on the latter, as Nottz gives the song a beat so bad that his name describes how you’ll feel about listening to it.

To be fair this album does have a few genuine hits. The Meech Wells produced “Nite L.O.C.s” by Mr. Kane (a.k.a. Kokane) and Snoop taps into 80’s pop nostalgia and mixes it with 70’s funk nicely. I first heard this song as an “exclusive” on the Big Snoop Dogg radio show while driving around Las Vegas on honeymoon, and it’s inclusion here was for me worth the price of admission in itself. The surprisingly tight mesh of wunderkid Hi-Tek with Soopafly on “Are You Ready?” proves that he has more than Mood, Jonell and Talib Kweli to offer hip-hop. “Hey You” by Alchemist is a smoothed out soul-stirring jam with Snoop, Soop and E-White providing the vocals. All three of these tracks occur back to back halfway through the album, which proves that sometimes good things are worth the wait.

The “Doggy Style AllStars” as a whole are a mixed bag. Snoop’s laconic flow and presence as master of ceremonies keeps this album moving forward even when rookie artists and blase beats might hold it down. As such this project could be viewed as something of a Snoop Dogg mixtape. Like most mixtapes on the market today, it has a lot of filler, some genuinely bad songs that didn’t deserve the shine, and a few exclusives that are what you really paid for. If you can live with that analogy and/or you’re a fan of Big Snoop, “Welcome to Tha House, Vol. 1” has something to offer you.