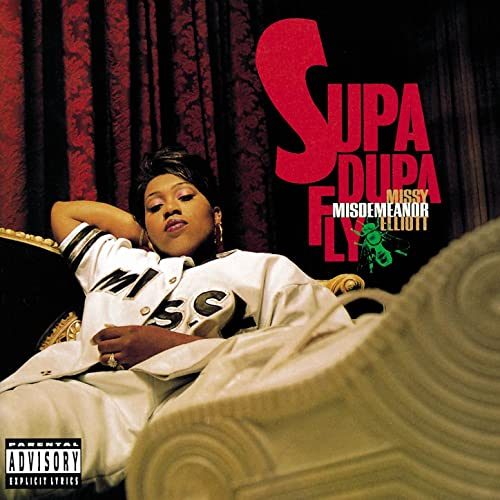 Melissa Arnette Elliott b/k/a Missy Elliott is such a fixture in the cultural landscape now that I have to force myself to remember a time when she wasn’t a household name. From the early 1990’s she was a part of the urban music landscape as a member of R&B quartet Sista, which in turn led to her being part of the Swing Mob (acts affiliated with or published by DeVante Swing of Jodeci), which in turn led to her and childhood friend Tim Mosley (Timbaland) have an ever increasing profile as songwriter and producer respectively. If that had been where things ended for Elliott, a behind the scenes player who made occasional cameos on other people’s songs, her career would have still been successful and lucrative. When I heard the Bad Boy remix of MC Lyte’s “Cold Rock a Party” in ’96 though, it was immediately clear to me that Elliott was DIFFERENT in a very good way.

Even though her entire verse on the song is just over half a minute long, it was undeniably a star making moment. Her trademark Virginia drawl, her unforgettable “hee hee, hehehehe ha” ad lib and punchlines like “I be +Feelin Myself+ like I was T-Boz” ensured you couldn’t forget her performance, and the song’s repeat rotation on TV and radio made the track inescapable. Elliott did not let the momentum she gained from the exposure go to waste. For the next year she was on one remix after another, made one cameo after another, and it got to the point I joked with people that you couldn’t release a single without Missy on it. Again if this had been where her career had peaked it would have been a success. You can make a very good living being the hit-woman for hire who helps your singles go gold or platinum. “Supa Dupa Fly” showed her ambitions far exceeded those modest goals.

It’s hard to imagine that “The Rain (Supa Dupa Fly)” was in any way controversial in 2020, but once again I’m forcing myself to remember things the way they were in a whole different era. I knew people who were ADAMANTLY opposed to this song and thought “Beep beep, who got the keys to the Jeep? VROOOOOM” was the WORST thing to happen to rap. There were people who were horrified that her simplistic, silly rap was going to somehow be the death of “real hip-hop” and used the song’s massive chart success and cartoonish music video as their proof. If I’m being honest I was on the fence about it. I loved Timbaland’s production, but I had a hard time taking Elliott seriously for a minute. It was as if she had taken her famous ad libs from singles and built up an entire persona around it. She even had a track called “Hit ‘Em Wit Da Hee” referencing said same interjections.

Even though there was a real and present danger that Elliott could typecast herself as the “hee hee hee” rapper by doing that song, the Lil’ Kim cameo helped keep the train from going off the tracks. The song that absolutely won me over though was “Sock It 2 Me.” Timbaland’s sample of The Delfonics “Ready or Not Here I Come” was pure genius, and since The Fugees had looped Enya when Lauryn Hill sang said same on “Ready or Not” the two songs sound NOTHING alike. In fact you can’t even hear The Delfonics vocally on the track — all you hear are the strings and the brass as Missy sings and Da Brat raps. And let me tell you something — Da Brat RAPS HER ASS OFF here. She flies through her verse at such breakneck speed you can catch whiplash trying to keep up.

As strong as the guest verse and the production are, Missy Elliott still remains the star of the show, crooning “my hormones jumping like a disco/I be popping mess like some Crisco” and staying as unforgettable as ever. Elliott had perfected a unique ability to be slightly corny and yet arguably MORE COOL because she was completely fearless about it. That comfort zone owes a lot of its credit to Timbaland, who knew how to compliment whatever she’d do vocally with the fliest shit musically. “Beep Me 911” is that signature Tim sound, complete with his own “say what say what” interjections, funkalicious bass, and squeaky chirping sound effects no other producer would dare loop. Mr. Mosley dares and Elliott accepts his dare and says “let’s have 702 cameo on it.” They all sync up perfectly.

Given how big the singles off “Supa Dupa Fly” were it’s easy to forget or overlook the non-radio tracks here. That’s a mistake. “Izzy Izzy Ahh” is a prototype for future megahits like “Gossip Folks.” Elliott’s friendship with Aaliyah led to a duet on “Best Friends” that gained greater significance because her life was tragically cut short. Speaking of R&B friendships she made through her Swing Mob days, it’s a bit shocking that “Friendly Skies” featuring Ginuwine was never considered to be a single off this album.

When revisiting my feelings about Missy Elliott in the 1990’s, I remember thinking she should have rapped a little more and sang a little bit less on “Supa Dupa Fly.” That was entirely because I knew her from her cameo raps and had no knowledge of nor consideration for the R&B career that proceeded it, so the bias was made entirely of my own ignorance. Having greater perspective now I can appreciate the way she interjects rap attitude into tracks like “Don’t Be Comin’ (In My Face),” jumping back and forth between the two styles and throwing a middle finger up to hapless men who want to get with her but just can’t hang.

“You never know a good thang until I’m gone” quips Missy, perfectly content to sing about how fly she is, then rap about it, then at the end of the track just TALK about it — and Tim makes it ALL sound good. That’s another thing I remember thinking at the time — Timbaland could make someone reading the Oxford English Dictionary from A-Z in order sound like a dope rap song. In truth though there’s always been a special chemistry between Missy and Timbaland that he doesn’t have with anybody else. That’s not to say they haven’t had hits without each other, or that they haven’t made other people’s songs into hits, but when they work together it all just clicks. The critical element that makes “Supa Dupa Fly” a special album is that it’s entirely devoid of pretentiousness. Elliott isn’t trying to be the greatest lyricist or singer of all time — she’s just being quirky, fly and charming. Timbaland builds on that and together they create a stellar solo debut.