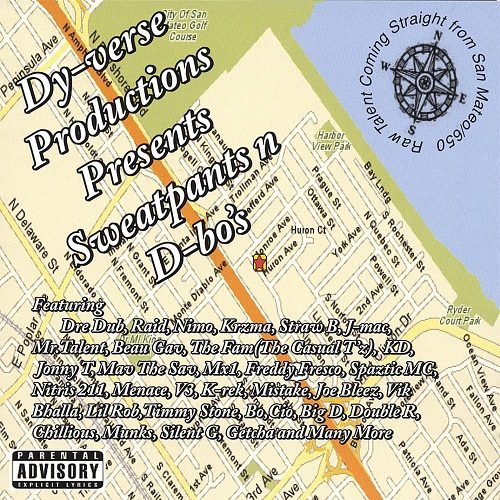 “Sweatpants n D-bo’s,” something of a greatest hits for Socal’s Dy-verse Productions, might as well be a greatest misses. As blunt as I am, it works to reflect the music on this compilation. Straight up and straight forward, wannabes populate the entire disc. Not wannabes as in wack rappers; the emcees, damn near all thirty or so, show a great deal of potential and skill in their flows alone. With good rhythm and great voices, they all can rap, but they effectively prove that talent is (maybe) half the battle.

A list of titles more than illustrates how amazingly conformist the compilation is: “Get With U Girl,” “I Luv This Weed,” “Life Is,” “Rep Yo Hood,” and “Shit Gets Deep” are as recycled as water bottles and soda cans, with content as been-there as said liquids. Nonsensical, violent battling makes up far too much of the 79:47 (that’s right – not 13 seconds to spare!), and the apex of creativity can be found in lines like “you got one nine, well nigga I got two.”

There’s a lot of mean muggin,’ and maybe just as much marijuana, but “Shit Gets Deep” possibly best exemplifies the compilation’s amateur appeal. Forgive my arrogance, but I honestly can’t understand how a rapper walks into a studio to record “from an emcee to an emcee, this shit gets deep.” I’m not KRS One, but I know what makes hip-hop fun to listen to, and an artist telling me just how stellar he is – ESPECIALLY coming from a completely unestablished one – doesn’t cut it. Seeing the Dy-verse crew is Cali-based, let me lend a hand of professional advice: listen to more Murs and early Pharcyde. Don’t aspire to imitate their greatness or even appeal to my own fandom. Rather, understand that making hip-hop that reflects your own life is infinitely more engrossing than drive-by’s and reefer. Those topics are best handled by particular, established crowds (ones backed by good production, ahem), and desperately trying to apply to a norm is a truly pathetic thing to listen to. Even the parental advisory sticker is a homemade photo shop job to show how f’real they are.

“Lady” is an obviously forced pile of stinking mush, but the aforementioned “Get With U Girl” is even worse: “I wanna get with you girl, ’cause there’s something about your body baby.” Let’s not get TOO romantic now. Chillious puffs his chest for “More Felonies Than Friends” but comes off more like a joke than a threat. “All Game” is but one of several recordings that sound like live radio performances, and “Special Prayer” might as well have been another mediocre instrumental, seeing I could barely hear any of Cio Castenada’s vocals.

Musically, “Sweatpants & D-bo’s” is proof that professional recording equipment is a safer bet than a laptop. Nearly all of the 23 beats consist of 3rd grade-level keyboard melodies and extra chincey drums, some with shitty vocals, some with a dash of shitty samples. Either way, all the emcees are severely hindered by the unfortunate, emotionless selection of beats. Still, “Try Me” is like culture shock, finally sounding somewhat professional with a mandolin loop easily comparable to one that Stoupe the Enemy of Mankind would dig up. Elsewhere, Dy-verse Productions managed to recruit the beat-making specialties of Chops of the Mountain Brothers, who, besides an entertaining intro of scratching, is also extremely underwhelming.

“Sweatpants n D-bo’s” is a culmination of the most cliched elements of post-2K hip-hop, all over grating beats and recorded poorly. It’s not a hopeless affair, in that talent is evident. But clearly, Dy-verse Productions just need to get back in the lab. Or get back to writing. Maybe take up yoga. Anything to move past the monotony of “Sweatpants n D-bo’s.” Maybe their most brilliant artistic touch comes in the album’s ironic closer: six seconds of laughing.