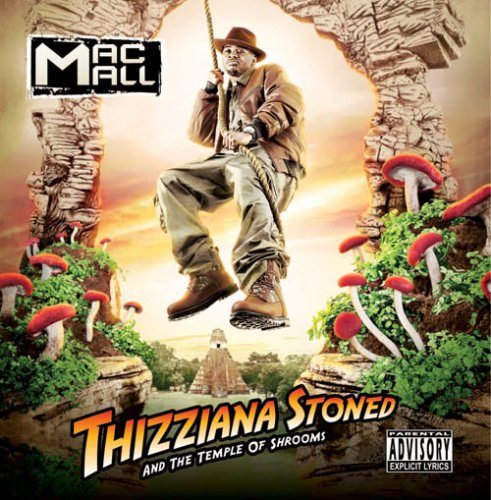 Mac Mall :: Thizziana Stoned and the Temple of Shrooms

Thizz Entertainment is the new No Limit Records. Just look at the business plan of releasing a ton of albums every year and now they’re even including the crazy Pen and Pixel-type album art that made No Limit albums stand out so much. I’m not hating, I’m actually a fan a crazy album art and I don’t care how many albums you put out as long as they’re good. In the case of Mac Mall’s latest release, the album art was actually the biggest reason I decided to peep him again. In all honesty, even if you never heard of Mac Mall, as a rap fan you should want to have this album in your collection along with a few Mac Dre gems just to be able to say “Look! And you said gangsta rappers don’t have a sense of humor.” Album art aside, Mac Mall makes marvelous music. Partly because of his use of alliteration and smooth flow. He’s a seasoned vet, making his first album as a teenager back in the early 90s, and this album shows that he’s only gotten better with time. If it wasn’t for the album’s inconsistent production I’d be ready to proclaim Mac Mall the new king of the bay, but as it stands Thizziana Stoned still creates some great music.

Mac Mall pops things off with a Hyphy beat produced by Droop-E on “Slobba.” Droop-E’s stripped down beat works but doesn’t stand as his best work and the subject matter limits the impact of the track. “Girls Jus Wanna” is more vintage Mac Mall as the beat includes more of the funk that made the bay famous. The subject matter once again could be better, but truthfully it’s nothing to complain about. The man is named MAC Mall and unless you’re a square you know what a mack is and what mackin’ is all about. “Here Come” switches things up subject-matter wise and finds Mac Mall repping his new label to the fullest:

“Peeled up person in turf turban observing my workings
Hoes get paid for perversion, grinding serving the urban
Kemosabe, poli with black illuminatis
At the Ivory peeping Pavarotti
Treal TV, watch me in Thizz in Color
With brothas from another stunna, greater bay hustlas and gunnas
Chemical Ali let you have it, Mallenium addicts
Meezy spit the mathematics for the savage demographic
Fear of the Mac Planet, Thizz-hop it don’t stop
Always on the clock and any nigga can get got
Fuck how hard you is still get your hammer chopped and screwed
Fools food for my goons and we always hungry
Grimy, gully buddy, rollers Humvee, Cuddy trust me
It get ugly fore they handcuff me,
Word to Furly, Arrivederci
Fuck hurting, there’s no question that we gon’ merk ya”

The album follows the same general pattern as Mac Mall celebrates his mackin’ lifestyle and the lifestyle of a rap star on the Thizz label. It leads to some decent bay anthems like “Shoo” and “Throw Up T’z” and smooth mackin’ tracks like “Luv Luv Lav Lav” and “Butta.” “Butta” even sees the return of Ray Luv after what seemed like an infinitely long absence. Mac Mall also takes a break from the partying to drop a few heartfelt reflections on “Rather Have” and even explains what Mac Mall is all about on “It Ain’t Easy Being Meezy.”

“Thizziana Stoned” is far from Mac Mall’s best effort. “Illegal Business,” “Illegal Business 2000,” and “Untouchable” all offer Mac Mall at his best, but Mac Mall still delivers a solid offering and shows he can adapt to the new bay movement. Out of the bay rappers he remains one of the best both flow-wise and when it comes to cleverness. Backed by a better selection of beats and a more balanced approach on the mic, Mac Mall could surely drop classic material. Even so, he still one of the best out of the bay and his albums are still worth peeping. Though lacking in substance, Mac Mall delivers his party rhymes with enough flair and style to keep even the most demanding hip-hop fan entertained. While Thizz Entertainment is guilty of flooding the market with too much material, in Mac Mall’s case we’ll take as much as we can get.