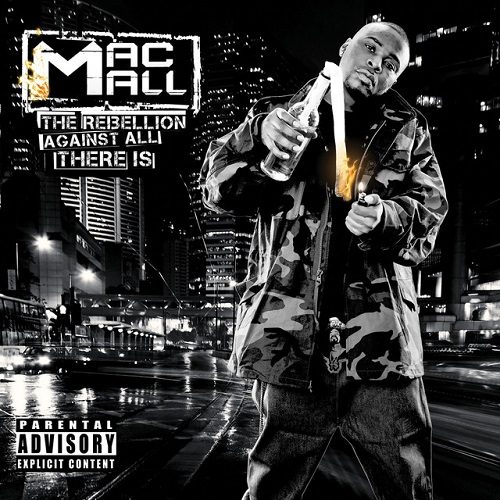 Mac Mall :: The Rebellion Against All There Is

This one comes as a surprise. Just when I thought Mac Mall was content with being a Mac Dre disciple and observing the teachings of Thizzlam, he comes back with one of the most radical rap album titles of all time. Question is, does the content match the headline? The lead single and titular track suggested as much. To a fragile beat consisting of little more than sparse drums and faint synth flares, Mall spits incendiary lyrics in his characteristic sharp voice that carries indignation well:

“Me against the world, and the odds in my favor
Me against the Babylon system, want to enslave us
Me against the unjust, judicial slave traders
Me against the corporate environmental rapist
The government that hate us
We elect politicians, for pay-off they betray us
A system ran by sadists
Land of the free – ain’t that way for me
Uncle Sam want blackman hangin’ from a tree
or in penitentiary for century
Devil want me on my knees – I’m fightin’ on my feet
Holdin’ court in the street, blappin’ heat at the elite
The rich get richer, they lie, steal, cheat
Bush dropped bombs on babies in Middle East
Never thought I’d see Obama do the same thing
Economy crashed cause of Wall Street robbery
And out here we survivin’ by the skin of our teeth
My cousin lost his job, so his kids barely eat
His boss got a bonus, folks homeless in a week
To peep the American Dream I guess you gotta be asleep
But I’m wide awake and I can peep reality
To stop insanity we got to bury the beast, deep
The government treat us like sheep
So rebel against the system and the lies that they teach
Rebel against the system and the lies that they teach”

With “The Rebellion Against All There Is” Mac Mall doesn’t break personal ground. On the contrary, with Khayree on the beat and Ray Luv featuring in the third verse, the song harkens back to his ’90s material. Besides serving game and serving dames, Mall always had a social, even political streak. That doesn’t change the fact that calling an album “The Rebellion Against All There Is” raises expectations that aren’t met with a title track alone.

He casts the first stone on the opening “Mac Manifesto,” lashing out at mainstream rappers who are “quick to do they dance and show they teeth as we dyin’ in the muthafuckin’ streets.” Wondering how “we go from 2Pac to this pussy-pop disco cornball crossover shit that they claim is hip-hop,” Mall builds a momentum that is instantly undermined by the following tracks, “Dayz Like This” and “My Room,” which both shoot game at an object of desire. Mac’s pimp game may be sharp, but after such an introduction and under such a motto lyrics like “I keep a hardheaded hoe on a real short leash” and Khia samples result in one of the most absurd album sequencings in recent memory.

Up next, “The Rebellion Against All There Is” still manages to leave a lasting impression, especially since it’s framed by Khayree with a wider musical scope with pianos and choral vocals bookending the track. The producer also shows off his creative side on “Izm,” one of several tracks that feature change-ups and breakdowns. Longtime Mac Mall fans should be satisfied with “Izm” as the natural game spitter follows up the opening line “My rhetoric’s immaculate / yes I truly possess gab of gift” with a barrage of alliterations and tight rhyme schemes. Nevertheless I find it hard to get over this particularly poor line where he says, “You scared cause you faggots mo’ pussier than Pam Grier.” The glaring homophobia aside, how much sense does it make to equate Pam Grier, bad-ass heroine of ’70s black cinema – a film genre rappers refer to both frequently and fondly – with being ‘scared’ and ‘a pussy’?

In all fairness I always try to look at the big picture, and from that point of view “The Rebellion Against All There Is” is a solid offering. The mack attack of “Dayz Like This” and “My Room” is balanced in the second half by romantic efforts “Get it In” and “Everything” and even a song dedicated to the L word itself, “For Love?”. In any case Mall doesn’t shy away from making strong statements, on the political side with the bluesy “War Drum” or the finale “U Can Get it 2” (could also be called “Country Ran By Thieves,” CD credits are unclear), where he raps: “They just feed you lies through the fuckin’ TV / They want you to buy, so they sell so many dreams / They want you zombie for the machine / on your knees prayin’ for the milk and honey.”

For whatever reason Khayree and Mac Mall have not been able to tie it all together, musically and lyrically, and we end up with George Carlin samples on Mac Dre tribute songs (“Dre Mobbin'”) and pimp yarn sandwiched between industry bashings and revolutionary rhetoric. But maybe that’s part of Mac Mall’s fundamental oppostion in 2012. If you’re really anti-establishment, you might as well break as many rules as possible.

Mac Mall :: The Rebellion Against All There Is
6.5Overall Score
Music6.5
Lyrics6.5