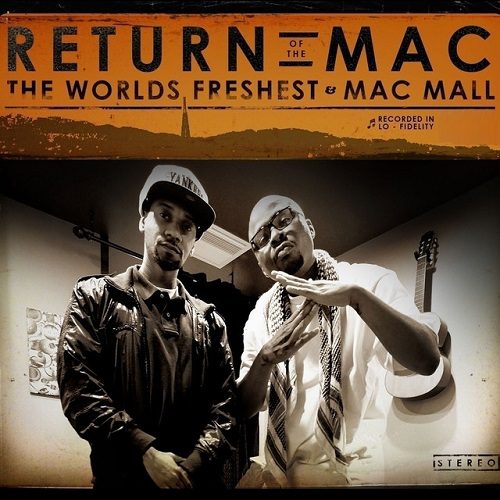 The World’s Freshest & Mac Mall :: Return of the Mac

In my review of “Feet Match the Paint” by Mitchy Slick and The World’s Freshest (AKA DJ Fresh) I mentioned that I would dig deeper into DJ Fresh’s extended catalog of work, and true to my word I did exactly that. Hence, I am now the very satisfied owner of his collaboration CD’s with Yukmouth, The Jacka, Keak da Sneak and a few other joints with lesser known MC’s also – many of those releases falling under DJ Fresh’s “The Tonite Show” banner. Another one of those collabs was a very nice surprise, as I saw that Fresh had just released an album with a rapper whose first couple albums have been favourites in my collection for a long time, i.e. the one and only Mac Mall, from the Crestside neighbourhood in Vallejo, California. “Add to Cart” was clicked without hesitation.

The album’s title “Return of the Mac” is rather curious, as Mac Mall hasn’t been gone for long (last album was in 2012) and has always been a promoter of the macking game – so I’m not sure what he’s returning from? He has a healthy sized back catalog in relation to how long he’s been around (hard to confirm, but roughly a dozen albums), and has been pretty consistent in releasing albums every couple of years or so since he appeared in the early 90’s. Therefore, I won’t be calling this a comeback, as he’s been here for years. His debut (“Illegal Business” from ’93) is quite special and has always been a favourite of mine, and the 1996 follow-up “Untouchable” is also most impressive, although his subsequent work after those great albums has only registered an occasional blip on my radar. I actually dropped off the majority of the Bay Area artists as the Millennium approached as I wasn’t too fond of their generally less edgy production, and thus the albums often made for inconsistent and unremarkable listens. If there’s any kind of return I want from “the Mac”, it’s a return to form, and the promise of such exists by teaming up with DJ Fresh.

One thing that is instantly apparent when looking at the tracklist is that we have a very short album here, with essentially only 7 full tracks (plus an interlude, “Shout Outs” outro and bonus instrumentals of all tracks), which is pretty much just an EP in my books. Even before a song is heard that’s a bit of a letdown, but then I suppose I’d be happier with an EP’s worth of 7 solid tracks, rather than only 4 or 5 good ones interspersed within a 20 song album. Thankfully, better than “solid” is the overall result here.

The title track opens up the album in a top notch way. The track is basically Mac Mall announcing his arrival, mostly by making a few threats to his enemies, and he spits in a way which almost has a freestyle looseness to it; it’s quite rejuvenating to hear a veteran drop his rhymes with such youthful vigour. DJ Fresh provides an appropriately edgy and somewhat loose beat, which has a touch of NY ruggedness to it which complements Mac’s less structured flow on the track nicely.

A nice feature of this release is that most of the tracks stand alone. In fact, musically nothing is the same here and even content-wise only two songs have related subject matter i.e. “As the Sun Goes Down” and “Me and My Breezy”. Perhaps surprisingly for a Mac Mall album, those two are the only songs that focus on the mackin’ subject, but if you know his music you’ll know that despite his rap nom de plume, Mac has more than one dimension to his topics. However, yes Mac still has his inner mack, and the two tracks in question detail a pimp’s lifestyle and agenda of “mackin’ hoes”. “As the Sun Goes Down” is definitely the superior one musically; DJ Fresh provides an ambient, cruisy soundtrack that is pretty much summertime California, but probably more-so night time Cali, as it has a certain ambience that separates it from partying in the sunshine Warren G territory. Its sister song “Me and My Breezy” is the only track on the album that doesn’t do much for me. Obviously the lyrical content here is rather predictable (for those that don’t know, breezy means “bitch”), and it doesn’t help that Mac Mall teams up with a very generic sounding Willie Joe, who I’m at a loss to find anything noteworthy to comment on. The biggest problem with the song though is that it feels more like Mac Mall is the guest, as Willie Joe seems to dominate the track with a long opening verse plus chorus duties. DJ Fresh holds back on the excitement here also, with a forgettable laid back vibe which is on the blander side of smooth.

As he’s done in the past, Mac Mall can get deeper too. If seeing the song title “Freebase” has you instantly thinking of The Furious 5’s “White Lines (Don’t Do It)”, then you already have a big indication as to what the song here is all about, and you could probably regard the track as an updated version of the 80’s classic. It appropriately starts off as a mid 80’s throwback, with an intro that is somewhat like a Whodini song, with 808 type kicks and treble, thunderous bass and scratching all over it. The main song itself is a desolate landscape of a strong bassline, hand claps, and more of the scything scratches. A feature of the song is the stops and starts which really add to the atmosphere, and act almost as interludes between the verses. I really like how Mac Mall does far more than just recite the lyrics here; via his vocal delivery he really emotes his frustration with what these people are doing to their lives, basically telling them to “wake the fuck up” â€“ and meaning it. It’s a quite impressive indication of a seasoned and mature MC:

“Got a basehead in your family, you know it’s all bad
Although they blood, you can’t let them in the pad
Man it’s sad, anything they can sell they gonna grab
Five finger discount, then they dash, dumb fast
Throw the kids’ Playstation in pursuit of freebasin’
Sucking on the pipe like the glass dick of Satan
Government war on drugs won’t work coz they made ’em
Don’t trip if you taking, but if drug money you chasin’
Rollers gonna raid, then pen time you facin’
Worldwide, it’s a fucked up situation
Searchin’ for sensation, ’til ya deathbed duration
High speed overdose, your destination
Furious 5 told ya “Don’t Do It”
But dope ya choosin’, now your whole life ruined
Came to the conclusion that your stupid ass losin’
But you still want to live in your dope-fiend delusion”

“SA Prize N*ggas” is Mac Mall in full blown intimidatory gangsta mode, telling us things like “it’s just business when we body’n a punk”. He also throws in a bit of bigging up his MC talents, and also hypes the skills of Fresh, reminding the listener that he hasn’t forgotten the art of showing pure hip hop skills. It’s interesting to hear him say “make casualties out you cunts”, i.e. the good old “c word”, which I’ve rarely heard from an American rapper in my all years of listening to hip hop, as opposed to it (unfortunately) being a favoured cuss word in Aussie hip hop of late. DJ Fresh provides a ruthless soundtrack which is heavy on what sounds like church organs, which actually go through some nice key changes as the track progresses. If you know your hip hop, you’ll notice the title of the song and the main chorus sample and scratches come from N.W.A.’s “100 Miles and Runnin'” â€“ which, similarly to “Freebase”, is pretty indicative of what you’re getting from the track.

Instead of channelling the gangsta themes of N.W.A., “Wop Wop” comes at us with some very delicious West Coast funk and quirky keyboards; it’s a little bit Del, but very reminiscent of what DJ Pooh was cooking up for the likes of Threat in the 90’s. There’s a bit of an abstract feel to this one, but it’s irresistibly catchy with its drum hits, or to use more relevant terminology, the beat is “slappin'”. To me at least, the song represents a pretty limited niche sound that didn’t last too long in the 90’s, so it’s really refreshing to be reminded of it here.

“Rated R” is an interesting one. If you haven’t heard Keak da Sneak before, think of what Tone-Loc would sound like on the road to recovery from laryngitis, but only 75% there â€“ yes Keak is that dry and raspy. Don’t get me wrong, I normally love Keak’s style, but his voice and offbeat, staccato rhyming really get lost in the music here; music which is rather busy with all manner of blips and bops, screams and synth effects going on. Thankfully Mac Mall saves the song with another WICKED performance; once again he’s rapping with a renewed energy. Finally, Black C comes very correct with the last verse; the song has a bit of a changeup with an almost a P.E. type siren kicking in, then the RBL Posse legend really brings the song home wonderfully with a gritty verse. If this is a hint that Fresh is going to do a project with Black C, all I can say is “BRING IT”!

I’m not sure who determines it, what the selection criteria is, or how much status the title holds, but DJ Fresh was actually crowned “Best West Coast Producer” in 2009 and 2010. I’m giving Fresh my own “Best West Coast Producer 2013” award; I really like the way he dabbles in the various elements and sounds that made West Coast hip hop such a wondrous and diverse entity in the 90’s, yet he is CREATIVE enough that his songs remain F-R-E-S-H and contemporary (something some of the current “NY retro style” producers should take heed of). Awards or not, any of the following big name veterans could benefit from teaming up with the man (though a couple of them have probably hung up their mics for good): Ice Cube, MC Ren, WC, Xzibit, Kam and Paris â€“ he could even do a thing or two to bring Snoop back to an underground sound (note to self: stop dreaming). The reality is that, in terms of broader hip hop fame, Fresh generally tends to work on a rung just slightly below Cube, Xzibit and co., and I don’t mind that, as he’s giving a sonic boost to deserving regional veterans and helping bring some newer, young cats into the game as well. As for Mac Mall, if he keeps bringing this sort of diversity and enthusiasm, with top quality beats to match, then he’ll maintain the reawakening of my fandom. I might even go and revisit some of his albums that I overlooked.