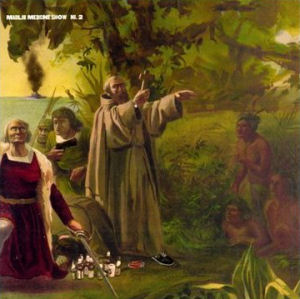 Otis Jackson, Jr., aka Madlib, aka Quasimoto, aka Yesterday’s New Quintet, is nothing if not prolific. In late 2009 he announced his Medicine Show idea for 2010. Simply put, he’s going to release an album a month. Odd numbered months will be original productions, and even numbers will be mixes from his TWO TONS of vinyl. He started the year off with remixes of Guilty Simpson, and his second entry in the series is “Flight to Brazil.” The subheading says it all: “Brazillian Funk, Psych, Jazz, Mixed by Madlib.”

The album is divided into 9 tracks over 74 minutes, with each track clocking it at 5-12 minutes. I’m used to mix albums that either highlight a dozen or so songs, or blend a couple dozen songs to create a steady, coherent groove. That ain’t Madlib’s style. Instead, this album plays like one of Madlib’s Beatkonducta records, only without the beats. He streams together 30-40 different songs in a rambling fever dream. A snippet of a light jazz number will segue into some hard funk, which will transition into drums playing, followed by some pop vocals, and rounded off by an acoustic guitar. It’s all tied together with sound clips from a flight attendant announcing a flight path on a Brazilian flight.

There’s no clue in the packaging as to what the songs are or who the musicians are. There are some faded photos and a poem in Portuguese, but that ‘s about it. (Stones Throw could take a lesson from Rhymesayers about how to make a CD package worth spending money on. The meager packaging doesn’t warrant the price, and you are better off downloading this for ten bucks than spending fourteen on the hard copy, vinyl excluded.) I’m guessing most of it dates from the late sixties through early eighties, with a heavy emphasis on jazz.

If obscure Brazilian music intrigues you, this is worth your money. Think of it as a guided tour through Madlib’s vinyl collection, with Madlib as your tour guide. The records in this mix must have set him back a few bills, and you can have access to it for the mere price of a download. If you are a fan of Madlib’s Beat Konducta series, this is a nice glimpse into an unadulterated version of one, and an insight into the artist at work.

That said, I couldn’t help but feel that he squandered an opportunity here, at least to some extent. There is too much easy listening for my taste, and he doesn’t do enough to build a groove or mood. 74 minutes of hard Brazilian psych and funk mixed by Madlib could have been epic, but instead it’s merely good background music. Still, I like this album, and not just because it’s Madlib. He unearths a lot of gems, and maintains a mellow, trippy vibe throughout the disc. Some hip hop heads might find it boring, but anyone into cratedigging should give “Medicine Show #2” a spin. If it doesn’t sound like your thing, no worries; Madlib will have plenty more for you during the coming months.