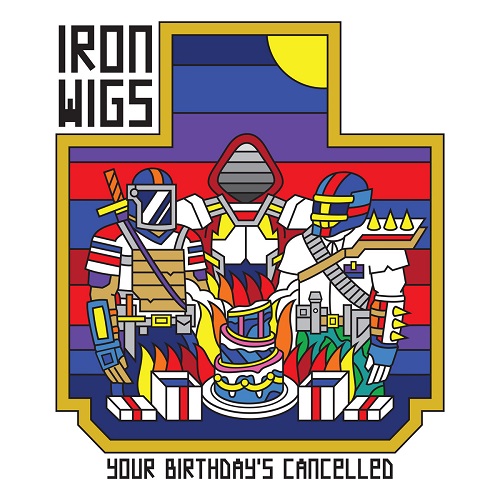 The premise is simple. Assemble three renowned fire-spitters from the underground hip hop scene and have them showcase their skills, as they try to out-boast each other over funky loops. Fully produced by Sonnyjim, an emcee from the UK renowned for his quick wit and intricate writing style, Iron Wigs sees him joined by Chicago artists Vic Spencer and Verbal Kent. Sonnyjim has worked with Vic in the past but throwing Verbal Kent into the mix defies the three’s a crowd cliche by making it MORE interesting. To quote another cliche, three has been the magic number throughout Hip-Hop history, whether it’s “The Militia”, “I Do It For Hip Hop” or “Return of the Crooklyn Dodgers”, the three emcee structure has often provided great moments, yet few three-emcee projects ever get released.

Thankfully, Iron Wigs succeeds by having three distinct voices that all deliver highly-quotable verses. There’s no real structure or purpose to the project other than to see how far each guy can push the English language – the title “Your Birthday’s Cancelled” is just another put-down summarising the album’s entire narrative. Belittle and brag in a creative manner that entertains. Even the names of the songs are taken from something one of the three has said, in an almost inverse mechanic to the one 2Pac used (where he ended his verses with the name of the track). It certainly beats your usual “Set It Off” or “Bars of Death” derivativeness.

To put Sonnyjim in the same bracket as Roc Marciano is quite bold, yet an apt comparison considering their style of production and their nonchalant manner that they deliver their performances with. So to hear them collaborate on “Bally Animals & Rugbys” makes sense and Roc could really be the fourth member of Iron Wigs if he wanted to. I have to shout out that “I’m a Lord of the Underground, I DoItAll” bar from Jim. And that’s where the record ultimately succeeds – it’s a detailed approach to rhyming that caters for two types of people. Fellow emcees that enjoy the craft of writing rhymes, and hardcore fans that pick up on the smart wordplay and obscure references.

“You pullin’ up on me, keep that same energy
Breakfast at Barney’s, gemstones from Tiffany’s
I spit epiphanies
Turn beef to mincemeat
It’s Guerilla Black rap, no Biggie
Will Smith, Gettin’ Jiggy Wit It
Z’ing a ziggy no ciggie in it
I smoke until I’m finished
Get off the di-dick
Swingin’ like Riddick *BOWE*
Leave you on the ropes, now you know“

Verbal Kent declaring “this isn’t Ugly Heroes, I’m rollin’ with dangerous villains” reminds listeners this is quite the different side-project for Verbal, one that puts an emphasis on lyricism even over the two Dueling Experts albums that he released with Recognize Ali. Something as stupid as “I’m gifted as a tree at Christmas and I’ve aged well like the cast of The Simpsons” even takes the age-old punchline rhyme structure and kicks dirt in its eyes, replacing setup-punch with punch-punch.

And amongst all the bar-trading, Iron Wigs manage to create their own universe. The vibrancy of the artwork in the “Purple Alien” video and the cover both exude character, as do the extravagant threats these three smooth criminals pose in their rhymes. The best example of this is the oddly experimental “Unagi”, featuring a deranged bass player plucking away at strings as each emcee steps up to drop their verse. It encapsulates the whole feel of “Your Birthday’s Cancelled” – these three rock up to an Open Mic event in tuxedos, cigarette in mouth like a scene from Casablanca and turn a jazz scenario into a Hip-Hop one. Remember Sinatra and Crosby trying to one-up each other in High Society? This is that, masters of the craft showing off but updated for 2020: an example of elite emcees doing what they do best. The only thing missing might well be that Grace Kelly figure, or perhaps that’s the prize. Either way, you’ll enjoy trying to pick a winner on each track.