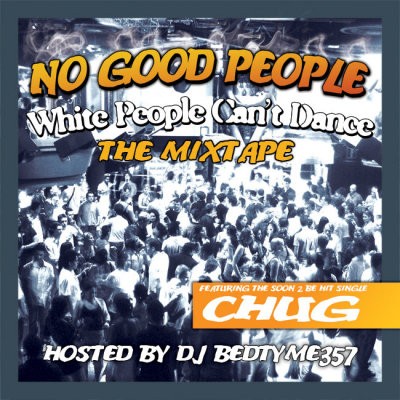 If you’re gonna have a stage name, choose something with a cryptic but understandable flair. The Molemen are no tiny, blind burrowers, but they do dig for samples deep in the hip-hop underground. Akrobatik is no circus powerhouse in stretch pants, but he does know how to make his words do an elevated flip mortale. Sadly enough, the No Good People from Long Island, New York have that name because they are just no good, people!

No Good People consists of two duos of priorly established high school rhyming twosomes. Stress & Dr. Sean Strange and Raida & O. Doub all grew up in Queens, New York. They were in and out of groups during the late nineties, and hooked up when both duos moved to Long Island in the beginning of the new millennium. They extensively toured the club circuit and did local radio shows to build up a steady fan base. “White People Can’t Dance” is an entree for their soon to come debut album, and should give them the necessary exposure to get them into the major league.

“I would get at Eminem, but there’s too much security
So tell 50 that you’re safe for tonight
(*Gunshot*) I ain’t moving now, but one day, yo, I might
And Bubba Sparxx, he’s been keeping it tight
I’ll run up on his farm while he’s sleeping at night”

“How to Rob” is a good example of the lyrical level on this mixtape. Like many tracks on this tape, both theme and beat are borrowed. “How To Rob” got 50 Cent his shine, and No Good People re-use the controversial way 50 Cent used to attack opponents. The kiddie jousts at established MC’s like Eminem and Sparxx are not very convincing and rather cheap though. It wouldn’t be a problem if this was just a filler track, but the other material does not possess the quality to make up for the feeble words on “How to Rob.”

“If I Were President” is a long list of all the groovy things No Good People would concern themselves with individually if they ever made it into the Oval Office. Over a borrowed beat, the MC’s come up with tantalizing things like legalizing prostitution, blowing up the Middle East, snatching turbans off at international conferences, taking shits in courthouses, and using the CIA for the successful exploitation of an international drug ring. The song is supposed to be a display of their witty approach to politics, but instead just shows their utter lack of comprehension of moral ethics. They are not mocking politics, they’re mocking themselves.

“The Club” is a long, apathetic complaint about not being to able to make inside the desired venue full of fine women, Jim Beam, and shiny fireman poles with luscious ladies sporting an American flag cut in tiny pieces for meant minimum exposure. Not getting into your favourite clubs can be a drag, but their words make them sound look indignant toddlers at times.

Some of the No Good People MC’s do possess raw rhyming delivery, with Stress and Raida as notable examples. Scruff voices, and a venomous vowel afterbite give them a hungry air. They got noted for that by veteran PMD (produced a track for them) and Uncle Howie’s horror hacksaw Mr. Hyde (collabo). For some reason, however, they chose to leave these tracks off the mixtape. As they are preparing their debut album, it sounds like a smart move not to put all the cards on the table. Unfortunately, mixtapes are supposed to be hyping the soon-to-come album, and there is little material that really made me excited of that yet untitled album.

If you take a step back and disregard No Good People’s lyrical content for a moment, you see an amusing cross-section of music put out by Caucasian MC’s/producers over the years. House Of Pain’s legendary club anthem “Jump Around” gets a meager No Good make-over, Bubba Sparxx’s “Ugly” gets a Civil War battle re-enactment, and Eminem’s “The Real Slim Shady” gets a 2006 Long Island approach. The most annoying about this well-known mixtape recycling trick is Dr. Sean Strange’s decision to add extra snares and drums to these classic melodies or pitch the beats up. Perhaps they were afraid of copyright infringement lawsuits. Then again, it would have been a better idea to use their own beats instead. Now I am forced to listen to great music tarnished by No Good meddling. It feels like looking at a beautiful end to end burner which has been scribbled over by an ignorant eighth grader.

With this mixtape I don’t think No Good People are doing themselves a favor. There certainly is room for angry underground white kids in the New York scene now Non Phixion is out of the way, I, for one, cannot detect any Ill Bill fury, Goretex militancy or warped conspiracy theory tales in their lyrics. Awaiting their first full length, they excel in mediocrity and an ill chosen stage name, for now.