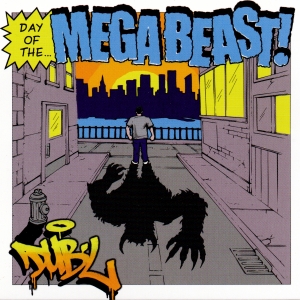 The final stand-off was at Mount Fuji. An alien race, known only as the Kilaaks, conquered Monster Island and took over the minds of its inhabitants. Once peaceful beasts ravaged the world’s metropolises. Rodan destroyed Moscow. Mothra devastated Beijing. Godzilla levelled New York. Man’s last hope, the United Nations moon base, succeeded in destroying the machine that allowed the Kilaaks their destructive reign over Earth’s protectors. When the alien race lost control of the behemoths, they pulled out their final ace. King Ghidorah ferociously battled the ten Monster Island heroes in an epic battle. Even though his hometown New York was reduced to a smoking pile of rubble, Dub-L traveled to Fuji to document that epic event. He was careless. He came too close. The Kilaak radiation changed something inside of him. He tried to control it, but couldn’t. Now, monster replaced man. RUN! It’s the “Day of the Mega Beast!”

The people are starting to give up on the New York hip-hop scene. While the South flourished over the past years, no new talent emerges from the five boroughs to counterbalance their swaggery flavour of music making. Ghostface Killah, one of the few Shaolin masters still standing, openly contempts the Southern takeover. He is one of the few still criticizing. Most dislike the competitive element between two directions of hip-hop that seem to have no historical connection. Nas, one of the most vital wise men of New York’s Renaissance days openly gave up on his beloved background. “Hip-Hop Is Dead” couldn’t be a more vivid statement of his view of the cradle of hip-hop. It is true that the number of quality artists coming out of New York has dwindled. But that doesn’t mean that New York quality is non-existant. “Day of the Mega Beast!” is proof of the simple fact that New York hip-hop is dormant in its lair but not quite dead yet.

After Ghidorah’s defeat, Rodan, Jet Jaguar, and the others traveled back to Monster Island. During their absence, the inhabitants of the mythical land had grown restless. Their gargantuan leaders tightened their grip and formed a new alliance as the Monster Island Czars. While they were rebuilding their empire, Dub-L was coming to terms with his new powers. He was approached by the cryptic underground dweller Aesop, who asked him to accompany him on a journey into the underworld. Dub-L instinctively knew this trip was part of his fate. After long marches through the dark, with the rhythmic sound of footsteps as their only companion they stumbled upon a hidden cavern of enormous magnitude. The scripture on the wall was ancient and alien. The young hero was shocked when he realized he had no trouble reading out the symbols. “He who enters the lair of the Mega Beast shall conquer or perish.”

“Practice songs, get the tune right
Unable to spark in the dark, without a moon light
Sarcastic bastard, star scholastic
I don’t shine bright: I quasar Jurassic
Fuck a hit, this is big brain madness
Deep Space 9
Buy proton bombs, hit your flagship”

After his discovery of the strange cave, Dub-L traveled back to his den in the borough of the Bronx, to document his journey on black plastic for the world to discover. “Music for Earthworms” sparked a dark desire in the people, and soon, the streets heard of legend. While he was working frantically in his lab, L began to feel strange uncontrollable urges. His dentures were painfully sensitive. He sometimes caught himself growling while making his music. He sensed a change inside of him.

After the Czars had rebuilt their empire, they grew restless. They were made for war, not for peace. With Ghidora out of the way, they needed new competition. They needed new challenges. Their thirst for conquer surpassed reason. One of the Monster Island spies returned from the West with the usual messages of democratic dictators and bureaucrat moguls. He also brought a record he thought his masters would appreciate. That night, the monsters left their island once more.

“This is the day of the Mega Beast
Feel me!
As I walk through the fire and brimstone of the heretics
I realize I ain’t been home
Now they call me the Messiah
Two arms, two legs, and one head
Is all I have to do battle in this dawn of the dead”

(Jemini the Gifted One in “Mega Beast Gathering”)

He fell to the floor. His eyes pulsated. His teeth turned fangs. His hands grasped the wooden floor for cover. His fingers made deep scratch marks. The neighbors were shook from their sleep by a furious scream. Dub-L fled to the only safe place he now knew of: the Mega Beast lair.

The strange symbols on the walls radiated with green light. They lit up the cavern in unearthly hues. Dub-L’s growl made the room shake, and he made his way to the giant turntables on the altar at the back of the room. He switched on the amps, crackled his neck bones, flexed his muscles, and then: he waited for things to come.

He didn’t have to sit around for long. A low, rumbling noise started to approach the subterranean lair, like a freight train moving towards the last stop. The ceiling started to shake, and collapsed when giant claws ripped apart the stone with experienced ease. The room filled with gargantuan grandeur, muscular mayhem. Half machine, half beast Jet Jaguar stomped Karneige to the ground, stepped towards the altar of his tormentor, and demanded beats. The monster cypher had begun a new cycle:

“Superstar Jet Jaguar, codename Caesar
Ape who speaks, looks down on Cheetah
Take me serious: I’m not for killer
There’s many gorillas, but not many for realer
Thought patterns, not too many iller
This chimpanzee is a Monster Island Killer”

New York is still unaware of the Gathering of the Monsters. They are unaware of the ferocity, the skill, the rage. They will find out, soon. South, north, west, and east will know. Beware of the Mega Beast!