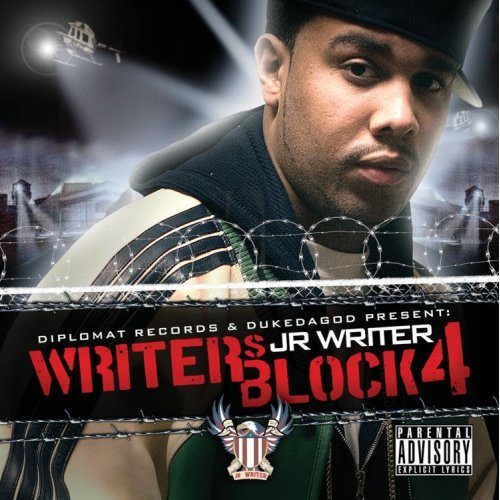 JR Writer is nothing if not prolific, because it seems between 2006’s “History in the Making” and the cold winter weather of 2007 JR Writer has released THREE volumes of “Writers Block.” It seems these hit the market as DipSet mixtapes and not through normal retail channels, but fear not “Writers Block 4” is on a major level thanks to distribution from Asylum Records. One could in fairness ask what difference it makes either way though, because hardcore DipSet fans are going to cop the previous volumes no matter what it takes (online retailer, street vendor, bootleg torrent) while casual fans aren’t checking for every DukeDaGod release and have no problem biding their time ’til the next official Jim Jones or Juelz Santana album hits stores.

“(We) hit the club, grippin on the old heat
Purple in the air, middle finger to the police (fuck ’em)
To get a dub, I’m skippin up the whole street
Tires lookin like your nigga sittin on some slow leaks (26’s)
So sleek, skippin wit’cha old freak
I swear to God, I’m the flyest nigga on the whole East
Get the drift? The party’ll be pissed
when I buy the bar and only leave water on the list”

“Writers Block 4” is composed largely of self-congratulatory raps like this, the aforementioned quote being from “Get Em.” This song does stand out but not because of JR’s blase blah braggadocio you could find poppin’ on any New York mixtape; it hits because the Spectacular produced beat is a stunning display of beauty in minimalism. It’s pleasantly reminiscent of DJ Premier’s work on Jeru’s “Come Clean” in that the beat exists in a world all its own – in this case an echo chamber with one lone mic in the center with the only instruments being an reverberating bass drum and a clave being tapped on the wall. What JR’s flossy rap lacks in uniqueness, Spectacular’s beat makes up for it in spades, living up to his name. Sadly Spectacular’s other tracks don’t capture this brilliance, as “Kill Em Everytime” sounds like Swizz Beatz on one of his worst days, and “You Don’t Know Me” is an insult to T.I. that should have the A-T-L MC giving them BOTH a pimp slap, because it’s got nothing on the original.

DipSet albums are often forced to live or die by the strength of their production; Cam’Ron and Jim Jones have both been able to disguise some of their lyrical weakness by riding monster tracks with catchy hooks. JR Writer seems like a different kind of DipSet MC though, one who like Juelz Santana has hidden depths that aren’t often displayed in their materialistic topic matter. The Dramasetters provide a boombastic track for Writer and 40 Cal on “Overdrive” and rather than slacking off and phoning it in, Writer steps up to the plate and shows his true promise:

“Dummy I rides and stunt on these guys
who wanna get high, but ain’t, got the money to fly
I, tour G4’s, just to get the best of life
You extra tight on the back of a connectin flight
I was born a spitter, you’re not at all a thriller
We watch your videos like, ‘Look at this corny nigga!’
Ask your mother young’n, she’s just lovin gunnin
Yeah I’m in the door, but the whore keep me +up and comin+”

Even though Writer’s topic matter hasn’t changed all that much, it’s the subtle touches where he adds vivid details to his stories and uses humor and wit to keep your interest that set him apart from his monotonous cohorts. The problem with “Writers Block 4” is that there’s too little of his true potential shown and too much “mixtape” material that seems better served to the DipSet’s core constituency and not a much larger audience. Writer claims to be history in the making, but he needs to shake things up a little more to write that chapter in rap’s history books of the future.