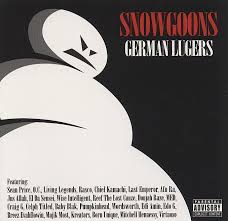 “German Lugers” by the Snowgoons has built up some blistering anticipation amongst underground Hip-Hop heads. Babygrande Records continues to act as one of the most important record labels today that not only promotes, but personifies real Hip-Hop. Most notably, Hi-Tek, GZA, Jedi Mind Tricks and Immortal Technique have inked deals with the beloved label. When you have that much talent in your mainstay, what better thing to do than to use as much of it as you can on one production team’s album? So, that is what they did with “German Lugers”.

The Snowgoons may be a new name to some of you, but best believe that they have been an essential part of the Hip-Hop music they love for nearly a decade. The seed was only planted in 1999 when Det teamed up with DJ Illegal, but the complete product came to full realization with the addition of Torben and DJ Waxwork just last year. The ‘Goons have been making major noise on their European soil with the hope of blowing up big with the release of “German Lugers” in the States. For this monumental release, they merely rounded up this short list of MC’s; Sean Price, O.C., Last Emperor, Wordsworth, Edo G, Craig G, Afu-Ra and so on and so on…Believe that there is no shortage of talent, but does it come together into a beautiful cohesive piece of Hip-Hop art, or does it fall to the same dastardly fate as so many other compilation style albums?

The first single off of “German Lugers” is said to be “Never”, which is a solo track by Army of Pharoah’s own Reef The Lost Cauze. The song is aggressive, like most of Reef’s stuff, and it really gives a good example of what the Snowgoons production is all about. Stoupe, of Jedi Mind Tricks fame, is the best comparison that can be drawn to the Snowgoons team, in that, most of the beats incite a feeling of intensity and when you think the beat has reached it’s apex something else is thrown into the mix to diversify it. “Never” is a boom bap joint at heart with the addition a dramatic vocal sample that bridges into the chorus and some nice strings. Lyrically, it consists of typical you will ‘never’ see my level stuff. Overall, it is an emotive track that will have your head nodding.

“Heads or Tails”, the introductory track, is strange because it features a chipmunk style beat and scratches that sample Vinny Paz of Jedi Mind Tricks, who is also sampled on a later song. This is a strange choice because fellow JMT member Jus Allah, as well as fellow Illadelph rappers, Virtuoso and Chief Kamachi are the guests on the song. One would figure that they could have just gotten Paz himself on the track, but for whatever reason he is absent. Once again, we are offered solid lyrics, but kind of typical words of aggression.

The song “Black Woods”, at track number 9, acts as a necessary change of pace, sandwiched in between some fast-paced joints. The ‘Goons offer another sick vocal sample and a vibrating bass line, but comparably it is pretty minimalistic. For once, the focus can be towards what the Living Legends have to spit. They are more than serviceable as anyone familiar with them are likely to suspect.

The highlights of this album are the solo joints, one from Last Emperor and another from Afu-Ra. Both feature some creative cutting and some really nice samples. The first, “Man of the Year” with Last Emperor starts off with a very familiar church hymn and whips into a frenzy of organ music. He drops some choice lyrics:

“Enemies, beware! my raps are fiery
Sort of like Shakespeare’s dramatic irony
Pros go from skid row to high society
But I must say, I just play a wide variety
I’m really that fresh, to the top entirety
All access, you should stop denying me
I warn any thug who thinks of trying me
Say no to drugs, you should try sobriety
I remain to cripple guys, with pain intensifted
Ready to Rock N’ Roll with more soul than triple five
I make a haunted castle come alive
And anything less would be uncivilized”

As you can probably tell, it is another self-appreciative effort. Afu-Ra does not change the shallow subject matter with “It’s Yours”, but he brings it as hard as he did way back on “Big Acts, Little Acts” from his extremely solid solo debut. The cut comes to life with the most thunderous bass on the entire album and a well-placed Nas sample. Afu-Ra does what he says on the track when he, “Take the wildest beat and make that shit come alive”. The Baby Blak track, “Thinking About Me” is nothing to sneeze at either with its phenomenal string-inspired backdrop and the underappreciated skills of Blak, himself.

The “bad” tracks are not really that bad. “Gunz”, with the coal-hot Sean Price is merely a disappointing effort in lieu of the wonderful “Jesus Price Supastar” album and , ironically, it is one of the softer songs on the album. El Da Sensai’s work on “Show Love” is kind of boring and feels forced for someone that has been doing his thing for awhile.

One thing that the ‘Goons do that is distracting is on every track they cut in, in mixtape fashion, “German Lugers!” and the echoing words, “fall out!”, usually multiple times throughout. A lot of producers make this choice, including the famed Alchemist, but usually this is done in a careful manner. The Snowgoons do it over the verses, instead of at the beginning or end of the track. It would be impossible for one to listen to more than a few joints without knowing the name of the album that the given song comes from.

The production team of The Snowgoons have successfully created a cohesive album in “German Lugers”, yet, despite the extreme complexity of their beats, they still tend to blend into one another a little too much. This may be because the artists that are featured share similarities. Also, it is almost as if these artists were just given a beat and were told to spit something hot over it without some exact direction. The subject matter is almost solely based around how bad ass each given artist is, not that they aren’t. Still, it would be nice to see a more conceptual album from the ‘Goons that really magnifies their obvious ability behind the boards.

Babygrande Records will not disappoint their legions of salivating fans with this, the release of “German Lugers” by the Snowgoons. It is an exhibition of wickedly complex beats complimented with some of the slickest Hip-Hop artists the game has to offer. Nevertheless, everyone that has been waiting for this will know that this release could soar to greater heights given a real definitive direction and an even stronger use of the stable at the disposal of the ‘Goons. The true heads will have to wait for that piece of perfection on wax and just be entertained with what they get, a very nice album.